OITA, 19 Oct –  England became the first team to advance to the semi-finals of the 2019 Rugby World Cup when they claimed a 40-16 win over Australia in Oita on Saturday.

As expected, this was an entertaining spectacle with both sides going at each other hammer and tongs for the full 80 minutes but, in the end, England’s class shone through with their forwards laying a superb platform for their win.

England captain Owen Farrell led the way with a faultless goal-kicking display as he finished with a 20-point haul courtesy of four penalties and four conversions. Their other points came courtesy of a brace of tries from Jonny May and further five-pointers from Kyle Sinckler and Anthony Watson.

For Australia, Marika Koroibete scored a try which was converted by Christian Lealiifano, who also added three penalties.

Wallabies head coach Michael Cheika promised that his side would attack England – in the build-up to this match – and they did just that as they ran the ball from all areas of the field.

Their high-risk approach proved costly, however, as they committed a plethora of unforced errors and battled to break down England’s defence.

Their decision to go for all-out attack gave them an edge early on and they opened the scoring in the 12th minute courtesy of a penalty from Lealiifano after Billy Vunipola infringed at a breakdown.

England were soaking up the pressure and struck back in style in the 18th minute when May crossed for the opening try. This, after the ball went through several pairs of hands inside Australia’s 22 before Tom Curry offloaded to May, who scored in the left-hand corner.

Shortly afterwards, the Wallabies were on the attack inside England’s half but a poor pass from David Pocock was pounced on by Henry Slade, who set off towards his opponents’ try-line. He was hauled in by the cover defence but had the presence of mind to stab a grubber kick through which was gathered by May, who dived over in the same corner for his second try.

Farrell succeeded with both conversions which meant England were leading 14-3 midway through the half before Lealiifano reduced the deficit with his second penalty in the 26th minute.

England were still holding the upper hand, however, and their forwards, in particular, were dominating in contact. And on the half-hour mark, Farrell added a penalty after Lealiifano went off his feet at a ruck just outside England’s 22.

The half’s closing stages were evenly contested but on the stroke half-time Lealiifano slotted his third penalty after Sinckler was blown up for illegal scrummaging, which meant England were leading 17-9 at the interval.

The Wallabies hit the ground running after the break and three minutes into the new half Jordan Petaia found himself in space just inside England’s half after gathering a long pass from Reece Hodge. Petaia did well to throw an inside pass to Koroibete, who showed his class as he rounded Elliot Daly with ease before crossing for a deserved try.

Lealiifano added the extras and the Wallabies had their tails up as they were trailing by just one point on the scoreboard.

But, once again, England did not panic and shortly afterwards Farrell threw a superb flat pass which Sinckler gathered on the edge of Australia’s 22 and the burly prop glided through a gaping hole in the Wallabies’ defence before crashing over for his side’s third try.

Farrell was successful with the conversion attempt and also slotted a penalty in the 51st minute which gave his side some breathing space with the score 27-16 in their favour.

The Wallabies upped the ante on attack in a bid to narrow the gap but despite several forays into England’s half over the next 10 minutes, they could not breach the English defence.

After seeing off those attacks, England were soon camped inside Australia’s half and were up 33-16 by the the 73rd minute courtesy of two further penalties from Farrell.

With such a huge deficit and time running out on the clock, Australia became desperate and launched several waves of attack from deep inside their half.

In the 76th minute, that tactic backfired, however, when Watson intercepted a wayward pass from Kurtley Beale on the edge of the Wallabies’ 22 and raced away to score the try which booked his side’s place in the semi-finals. 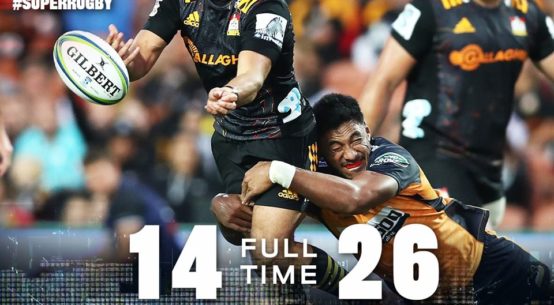