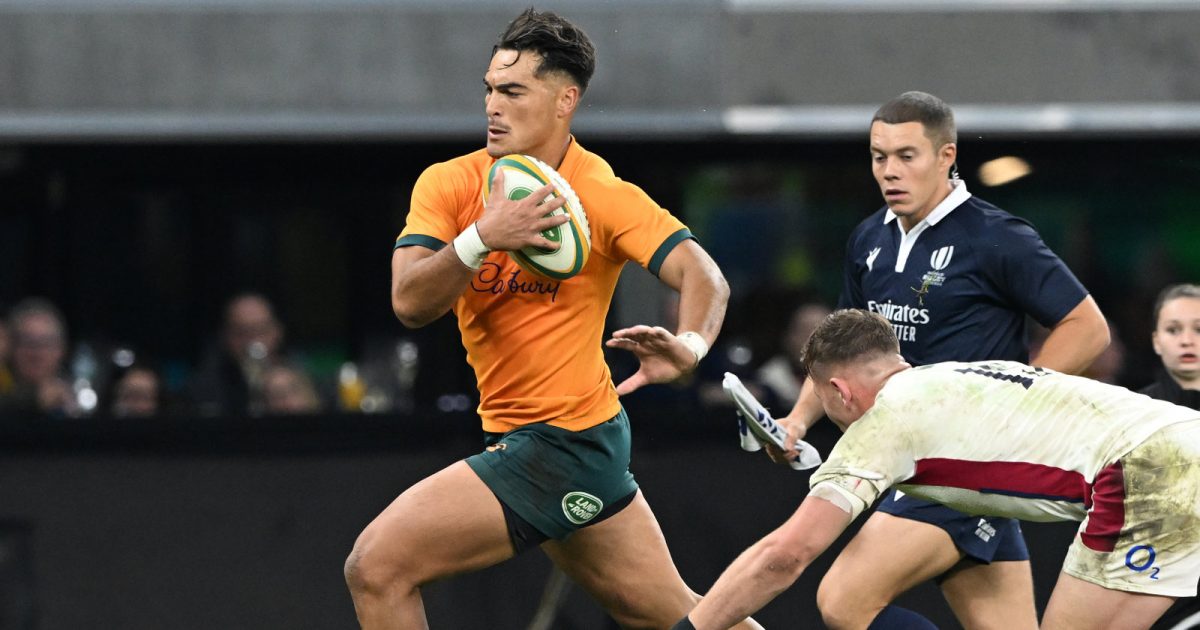 The Wallabies had Darcy Swain sent off early on but still managed to seal a 30-28 triumph against England in their July international in Perth on Saturday.

Swain received his marching orders for headbutting Jonny Hill in the 34th minute but the Wallabies dug deep and secured the result which is their first victory over Eddie Jones’ side in nine attempts.

Both sides scored three tries apiece with Jordan Petaia, Folau Fainga’a and Pete Samu dotting down for the home side while Noah Lolesio added 15 points after succeeding with three penalties and as many conversions.

Ellis Genge, Henry Arundell and Jack van Poortvliet crossed the whitewash for England and their other points came via the boot of Owen Farrell, who slotted three penalties and two conversions.

It is England’s fourth successive defeat and the second match in a row that they have been unable to finish off 14-man opposition after being routed by the Barbarians at Twickenham in their most recent outing.

The story of the first half was the Wallabies’ dwindling body count as they lost Quade Cooper, Tom Banks and Allan Alaalatoa to injury before Swain was sent off.

Losing veteran fly-half Cooper to a calf injury during the warm-up was unfortunate, but Swain’s removal from play was entirely self-inflicted as he clearly struck Hill off the ball in the 34th minute, forcing referee James Doleman to act.

Hill was sin-binned for provoking his fellow lock, mainly by pulling his hair as the two tussled during and after a maul, and the Exeter man had been lucky to escape punishment for a shove in his rival’s face earlier in the half.

Perth was hosting the world’s fifth and sixth-ranked nations and both performed like the middling teams their positions suggested in a scrappy and chaotic match played out in front of a crowd of 47,668.

Genge crossed for England in the third quarter but Australia hit back through Petaia and when Cooper’s replacement Lolesio nailed a tricky conversion, the hosts were in front.

Hooker Fainga’a delivered the fatal blow in the 69th minute and there was no way back for England who by now were coming apart at the seams, at least until London Irish’s teenage sensation Henry Arundell came on to tear the home defence to pieces.

In a worrying pattern, Jones’ men grew worse as the match went on because they started by showing several pleasing flourishes in attack with Joe Cokanasiga prominent.

Tom Curry – who failed to reappear for the second half because of a failed HIA – was sent charging into space and his long pass found Joe Marchant but the centre was brilliantly tackled by Marika Koroibete, whose defence had saved a certain try.

England’s lead built through Farrell’s boot and while still reeling from the loss of Cooper, Australia saw Banks leave the field on the medical cart after breaking his arm when falling awkwardly.

Alaalatoa was the next to exit as he rose unsteadily from the bottom of a ruck and the penalty count continued to rise, enabling Lolesio to land three points.

Early exit
And in the most dramatic departure yet, Swain was sent off after losing his cool amid ongoing provocation by Hill.

For all the setbacks, the Wallabies were clinging on and they entered half-time level through a second Lolesio penalty before taking the lead for the first time shortly after the interval.

It did not last long as Genge finished a line-out maul in the right corner and England pressed again in the same area of the field, but the Wallabies were rescued close to their line by the breakdown excellence of captain Michael Hooper.

Farrell had missed his last two shots at goal but he was on target in the 61st minute, although the Wallabies were back in front when Petaia dived over in the left corner to round off some smart build-up, with Samu Kerevi heavily involved.

Billy Vunipola was shown a yellow card for a dangerous tackle on Hooper and Australia’s tails were up as Fainga’a found a path through the middle of a maul.

Samu completed the Wallabies’ scoring before replacements Arundell and Van Poortvliet touched down in the closing stages to give England something to celebrate.