Fiji retained their title at the HSBC New Zealand Sevens and won their second tournament in succession on the HSBC World Rugby Sevens Series 2019 as a result of an emphatic weekend in Hamilton.

The defending champions had looked electric from the very first moment that they stepped onto the park at the FMG Stadium and it wasn’t any different when it came to the Cup final against the USA.

The USA, who were competing in their third Cup final of the season, struggled to gain any real possession and when they eventually came inches from the line a huge counter-ruck followed. Fiji’s breakdown work allowed the HSBC Player of the Final Tuwai the opportunity to go the length of the field for his second try of the final. Alasio Naduva also scored a brace as they finished their weekend off in real style.

Head coach Gareth Baber said: “It was obviously very special [to go back-to-back] and I want to say a big thank you to all the Fijian fans. They certainly lifted the team today and we appreciate everything you’ve done for us.”

The side were also awarded the UL Mark of Excellence Award for the act of sportsmanship ahead of the match as they lifted the ball girl high into the air while they said their final prayer.

England won the Challenge Trophy and in the process James Rodwell eclipsed DJ Forbes’ record for the most appearances ever on the HSBC World Rugby Sevens Series. It was Rodwell’s 90th tournament and he capped the landmark with a try.

The victory means that Fiji draw level with the USA at the top of the world series standings on 57 points. New Zealand follow on 54 before a ten-point gap down to South Africa in fourth. At the end of this year’s ten rounds the top four teams will qualify automatically for the Olympics in Tokyo 2020.

New Zealand made sure that they finished their home campaign on a winning note with a 29-7 victory over South Africa in the bronze final.

A battle of wills played out between the two before New Zealand, much to the delight of their home fans, created a 19-7 cushion via tries either side of half-time. Werner Kok’s sin-bin for a late tackle on Andrew Knewstubb was then punished by the All Blacks Sevens. The home side’s determination shone through as they sent Joe Ravouvou over in the corner before Sam Dickson finished their scoring.

In their respective semi-finals neither New Zealand nor South Africa were able to amass more than one converted try. The Blitzboks found themselves stunned by a focused Fijian outfit while the home side couldn’t find a way past the in-form USA.

Fiji’s two tries in the first four minutes set the tone against South Africa. Baber’s outfit coupled ruthless attacking intent with steadfast defence. Kyle Brown was sent to the sin-bin for a late tackle just before half-time and the defending New Zealand Sevens champions went 24 points up before their own line was broken. Selvyn Davids’ chip and collect was excellent to do so however Aminiasi Tuimaba’s second try arrived soon after and sealed a 29-7 knockout victory.

In the other semi-final New Zealand led 7-5 at the break against the USA though that advantage was largely against the run of play. The home side conceded first before Regan Ware’s interception-try was converted on the stroke of the interval. With four and a half minutes left Vilimoni Koroi was given a yellow card for an illegal tackle on Stephen Tomasin and the USA took their opportunity. A clinical finale saw Tomasin, and then Carlin Isles, strike and that rubber-stamped their place in a first ever Cup final in New Zealand.

In the late morning sun, the Cup quarter-finals played out. First, Fiji started where they left off on day one as Meli Derenalagi crossed in the first minute before Aminiasi Tuimaba then put them 14-0 up. Canada hit back once through Connor Braid but Fiji accelerated away to a 33-7 victory.

South Africa showed the fruits of their experience when faced with the considerable challenge of Samoa. Samoa, who had beaten England and Tonga on day one, led 12-7 at half-time before the Blitzboks punished a couple of errors early in the second half. The seven-try affair, with seven different try scorers, eventually finished 28-19 in South Africa’s favour.

The third quarter-final was a Trans-Tasman affair and one that ignited the sold-out FMG Stadium. Australia started with promise but then went down to six men following Maurice Longbottom’s deliberate knock-on. The home side seized the moment and Dylan Collier, Jona Nareki and Ware created a 17-point lead at half-time. Despite Australia responding through Simon Kennewell, Tim Mikkelson stretched out the hosts’ lead and they then repelled a late fightback from their opponents to take the encounter by 24-17.

The USA made it through to their first Cup semi-final in New Zealand for 18 years with a 19-14 win over Scotland. The series leaders going into the tournament started strongly with Ben Pinkelman’s work off the restarts proving to be crucial. Scotland, who proved how well they could comeback by beating France from 21-7 down on day one, almost did it again before a final error out wide halted their charge.

A fiercely contested fifth-place final between Scotland and Samoa saw the lead constantly change hands as players stood up and were counted for.

Not for the first time over the course of the weekend, Scotland had to turn around a half-time deficit in order to prevail. In the end, Robbie Fergusson’s hat-trick and a late Jamie Farndale try proved to be enough to get the better of a confident Samoan side.

Prior to that Scotland were also made to work by Australia in their fifth-place semi-final. They conceded first before wrestling the game back to lead 12-7. It remained tight until the final minute when co-captain Farndale made sure that a nine-match losing streak against Australia ended in style with a 24-14 victory.

Samoa had to overcome Canada to book their place in the fifth-place play-off. Siaosi Asofolau was instrumental as Sir Gordon Tietjens’ team went 21-5 ahead after seven minutes. Canada didn’t lose heart though and came back to within three points. It took late brilliance from Johnny Samuelu and Danny Tusitala to secure the 28-19 result for Samoa.

England made sure that they left Hamilton with the Challenge Trophy in their possession after a 36-7 victory over Kenya in the final.

Braces from Dan Norton and Dan Bibby – Norton with his 311th and 312th tries of his career – helped to create a 31-7 hold on the final with three minutes to go. With firm defensive play England made life challenging for Kenya and Tom Bowen’s second try of the match ensured that the Challenge Trophy had their name on it.

In the semi-finals, England made light work of Spain. Simon Amor’s men pressed 19-7 in front after seven minutes and accelerated out to win 38-7. Record-breaker Rodwell scored the second of their six tries and that match came after a 21-5 win over France in the quarter-final.

The trophy success followed an off-colour first day and the final victory gained valuable series points as Olympic qualification remains top of mind for England. At the end of the series the top four will gain automatic qualification for Tokyo 2020 and England are Team GB’s representative side in the world series.

Kenya’s route to the final saw them prevail over Tonga 19-12 and open up 24-7 against Argentina. Captain Jacob Ojee led by example with a personal points tally of 25 for the weekend and, despite being a less experienced combination of players, they certainly turned heads over the course of the two days. 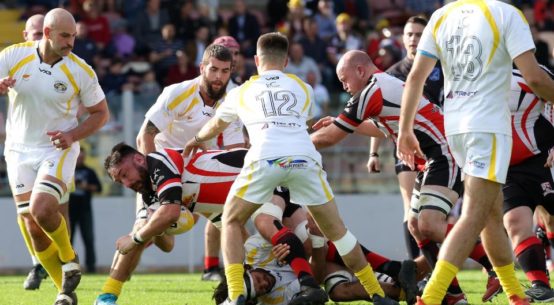