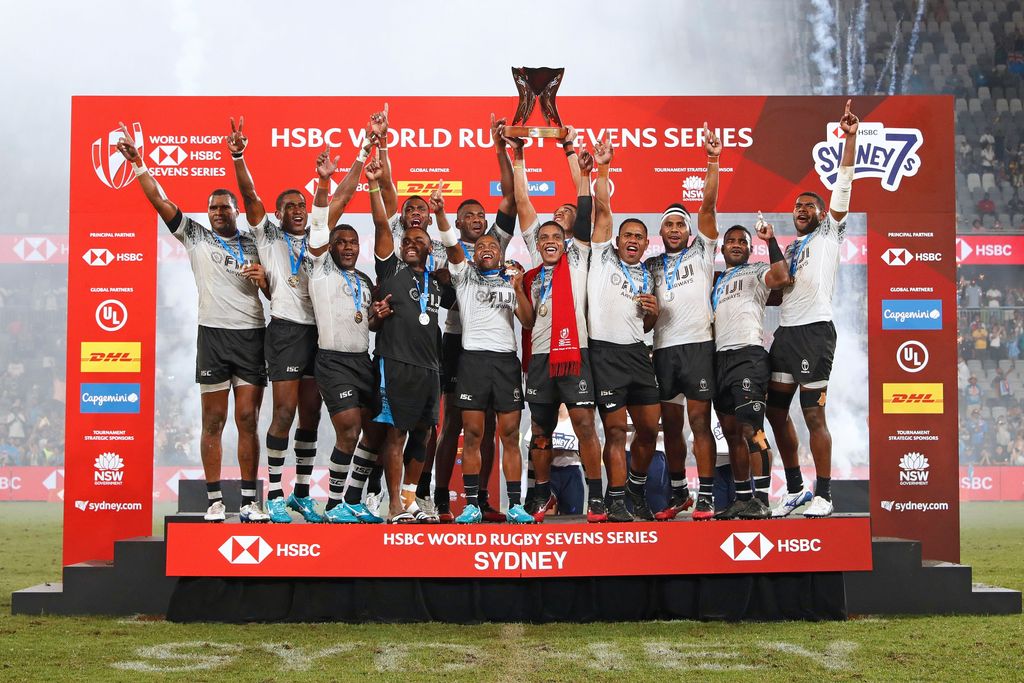 The smile was back on the faces of crowd favourites Fiji after they overcome a tight final with South Africa to win the HSBC Sydney Sevens for the first time.

Fiji came out on top against South Africa for the second time in eight days, although this time their prize was not ninth place but a first HSBC Sydney Sevens title.

Both teams had been determined to bounce back from that disappointment in Hamilton and served up a Cup final every bit as thrilling as their last meeting in Singapore when Fiji had led 19-0 at half-time only for South Africa to storm back and triumph 21-19.

Fiji nearly had the dream start in their first Cup final of the season, but JC Pretorius and Selvyn Davids managed to hold Meli Derenalagi over the line. It would only be a temporary respite, though, because as the rain began to fall again the ball skewed out the side of a breakdown and Napolioni Bolaca reacted quickest to score the opening try.

A barnstorming run from Zain Davids created the momentum for Pretorius to score with Fiji suffering a double blow with Josua Vakurunabili yellow-carded for a tackle earlier in the move. Fiji managed to hold out in his absence and then increased their advantage when a powerful hand-off from Bolaca gave him the space to run-in his second of the final.

Zain Davids crossed for South Africa midway through the second half but his namesake Selvyn was unable to add the conversion, leaving the Dubai champions trailing by two points. They were unable to find another score, Fiji and their huge contingent of fans in the crowd able to celebrate after South Africa knocked on in their own 22 with the final play.

Fiji captain Derenalagi said: “First of all I would like to thank the almighty Lord for giving us the strength and the power to come and deliver what we have been planning.

“Before we entered the field the message I told my team was just to go out there, enjoy it and do the job. We delivered that and I want to thank the soldiers behind me for that great effort you saw here today.

“Shout out to all the fans here in Sydney for coming out in numbers and for supporting your national team – this win is for you too.”

New Zealand still the lead the standings with 76 points after four of the 10 rounds of the HSBC World Rugby Sevens Series 2020, although now only by nine from South Africa. France are third on 56 points, just ahead of England (54) and Sydney champions Fiji (53).

The next round sees the teams head to a new stop in Los Angeles, home of the 2028 Olympic Games, at Dignity Health Sports Park from 29 February-1 March.

USA WIN BRONZE
A sub plot to the bronze final, delayed by more than 30 minutes due lightning in the area, was whether Perry Baker or Carlin Isles would become the USA player to score 200 series tries, the former drawing level by running in the opening try before captain Ben Pinkelman and Naima Fuala’au made it 17-0 before Will Hendy scored with the final play of the first half. USA lost Stephen Tomasin to the sin-bin but his team-mates held firm in his absence and then just as it appeared that Isles was set for try 200 Dan Norton caught and hauled him into touch. Instead it was England who had the final say, Ollie Lindsay-Hague turning Isles inside out to cut the deficit to 17-10.

Earlier in the first semi-final, South Africa edged a titanic battle with USA to preserve their record of never having lost to their opponents at this stage. Pretorius sprinted down the touchline for the opening try after 23 seconds, but USA hit back and Pinkelman’s try looked like giving them the half-time lead until Selvyn Davids tied it at 12-12 with a late score. With the rain beginning to fall in Sydney, the score remained that way until midway through the second half when South Africa captain Stedman Gans burst through for what proved to be winner with the Sevens Eagles unable to find the score to force sudden-death extra-time.

With every Fijian pass, run and tackle cheered by their vocal fans braving the pouring rain, the Olympic champions struck the first blow through Bolaca but would probably have hoped for more having had plenty of ball in England’s half in the first half. A second try did come barely a minute into the second half through Waisea Nacuqu and he was followed over the line by World Rugby Men’s Sevens Player of the Year Jerry Tuwai for a 17-0 lead. England gave themselves a lifeline when Norton chased his own kick and while he failed to ground after being pushed by Alasio Naduva, a penalty try was awarded and the Fijian yellow-carded. England sensed their opportunity and captain Tom Mitchell sprinted away for their second, adding the conversion from the sideline to cut the deficit to three with time up. Fiji knocked on from the restart but the ball went safely into touch and they could celebrate a first final of the season.

The 12 teams that missed out on the Cup semi-finals were ranked according to their placing in the pools to play-off for fifth to 16th positions.

The trans-Tasman battle for fifth place was dominated by New Zealand, who scored tries through Sione Molia, Regan Ware, Dylan Collier and Caleb Clarke before Lachie Anderson ran in from long range for a consolation try, taking the total raised by the Australian men for the Red Cross Appeal supporting those affected by the bushfires to $18,000 across the weekend.

Argentina made the better start in their encounter with Ireland for seventh place, Rodrigo Etchart and Rodrigo Isgro scoring in a first half that saw them lose two players to a clash of heads. However, Ireland came storming back with Jordan Conroy’s try at the death sealing a 21-12 victory on their first visit to Australia.

Sacha Valleau’s early try for France proved the only score of a ninth place play-off with Canada that was played in pouring rain, while Scotland ran out comfortable 21-5 winners over Wales in the all-European contest for 11th place. Sam Pecqueuer, captain Robbie Fergusson and Ally Miller ran in Scotland’s tries before Joe Goodchild added a late consolation for Wales, who still recorded their best finish of the season.

The 13th place play-off was closely-fought between Spain and invitational side Japan with first-half tries by Ignacio Rodriguez-Guerra and Pablo Fontes ultimately enough for Los Leones to win their second match of the weekend with the Tokyo 2020 hosts only able to find one try in reply from Shotaro Tsuoka.

Samoa found themselves in the 15th place play-off for the second weekend running – this time against Kenya – but again ensured they finished on a winning note with Paul Scanlan’s late try enough to secure a 19-12 victory for Gordon Tietjens’ men.

POOL STAGE CONCLUSION
The final round of pool matches had kicked off the men’s competition on day two with Fiji, South Africa, USA and England finishing top of their respective pools to qualify for the Cup semi-finals.

South Africa were already assured of their semi-final place after beating Argentina and France in the sweltering heat on Saturday and were joined by USA after they ended Australia coach Tim Walsh’s hopes of becoming the first to win a series Cup title with both a men’s and women’s team. Australia simply had no answer to the pace of USA flyers Baker and Isles who scored four tries between them in an emphatic 43-7 victory as their race to be the first Sevens Eagles to score 200 series tries continued.

The Blitzboks were equally clinical in their 36-0 victory over Samoa to win all three of their Pool B matches, Pretorius and Angelo Davids each scoring two tries in the win. Davids looked set to have a hat-trick for the third game running, but his foot touched the sideline and instead it was Muller du Plessis who scored South Africa’s final try late on.

England needed to avoid defeat against Canada to reach a second successive semi-final in 2020, but fell behind to an early Connor Braid try. England responded with two tries, Charlton Kerr’s coming while Braid was in the sin-bin, to lead 12-7 at half-time. The second half mirrored the first with Canada scoring first and England hitting back with a double to triumph 26-14.

Bankwest Stadium was literally rocking when Fiji took on Wales and the series champions certainly put on a show to delight the swathes of Fijian fans in the crowd, scoring nine tries to triumph 55-0 – beating their previous highest score of 54 in Hamilton last year. Eight players got in on the scoring act with Aminiasi Tuimaba scoring two quick-fire tries in the first half of the Fiji sevens’ masterclass.

Fiji’s victory meant New Zealand would miss the semi-finals for the first time this season, but the All Blacks Sevens did finish the pool stages on a winning note after a hard-fought battle with Kenya. Salesi Rayasi and Tim Mikkelson had put New Zealand ahead but Bush Mwale’s try kept it tight at half-time. The score remained at 12-7 until Sam Dickson made certain of victory for the series leaders late on.

Invitational side Japan were 30 seconds away from recording their first pool victory of the season when Dougie Fife went over to snatch a 21-21 draw for Scotland in the day’s opening match. The Tokyo 2020 hosts had led 14-0 after earlier tries from Ryota Kano and Toshiki Yamauchi before Scotland drew level, and then again after Yoshihiro Noguchi’s try at the end of the first half, but it wasn’t to be.

First-half tries by Santiago Mare and Luciano Gonzalez set Argentina on the way to a 17-5 victory over France that secured second place in Pool B. Remi Siega’s try sandwiched between them meant it was anyone’s game going into the second half, but with only Etchart able to cross the line it was Los Pumas Sevens who guaranteed another top-eight finish.

Ireland never looked back after establishing a 19-0 lead against Spain in their Pool D finale. Spain did score at the end of the first half through Manuel Sainz-Trapaga, but they suffered a double blow with Pol Pla sin-binned and a penalty try awarded to Ireland. There was no way back from that with Spain only able to manage a further try through Alejandro de la Rosa to go down 26-10. 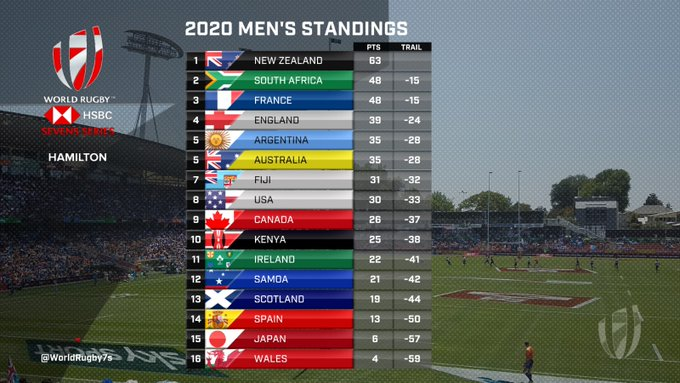 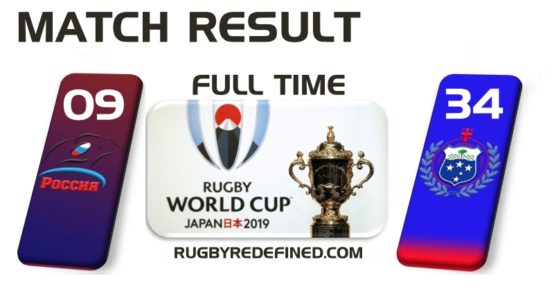 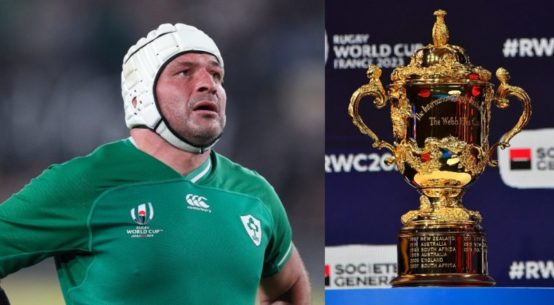