The Crusaders inflicted a fifth successive defeat on the Melbourne Rebels with a 55-10 victory at AAMI Park in Melbourne on Friday.

It is another second-half capitulation for the men from Melbourne, trailing 13-10 at half-time, only to concede 42 unanswered points in the second half. Dave Wessels’ men did the same thing against the Waratahs in Sydney some weeks back and their mentor will want to nip this worrying trend in the bud.

After such a promising start to the season, they have fallen by the wayside, suffering their fifth defeat in succession, while the Crusaders consolidate their position at the top of the overall standings with a superb team performance. The Rebels had already missed 24 tackles in the opening twenty minutes, which was never going to bode well for them.

The home side opened the scoring courtesy of a Jack Debreczeni penalty but it was the Crusaders who got the game’s opening try. It all came from Rebels number eight Amanaki Mafi being caught offside in front of the kicker. The Crusaders opted for touch and took the ball through the phases from left to right before they won another penalty for no clear release. They took the quick tap and go, catching the Rebels’ defence napping by going back to the right where Seta Tamanivalu was on hand to dot down in the corner.

The Rebels were dealt a blow in the 15th minute when Reece Hodge was sin-binned for a deliberate knockdown. The Crusaders capitalised on their numerical advantage soon afterwards when Andrew Makalio crashed over after Pete Samu had made the early inroads as the Rebels were guilty of missing too many tackles. With fly-half Richie Mo’unga having missed both his conversions, the Crusaders held a 10-3 lead with a quarter of the game gone, having enjoyed 80 percent of the possession in that period.

Two minutes before Hodge was due back on the field for the Rebels, the Crusaders went down to 14 men in identical fashion as Matt Todd was given his marching orders for a deliberate knockdown. From the resulting penalty, the Rebels set up the lineout driving maul and won the five-metre scrum after the ball was held up and carried back. Terrific defence from the Crusaders meant the Rebels would have to wait a little longer for that try.

Finally, it came in the 32nd minute when the ball slipped out of Crusaders scrum-half Mitchell Drummond’s hands, with Hodge pouncing on the loose ball and gleefully gobbling up the opportunity, making it 10-10 with seven minutes to go before the half-time break.

Soon afterwards and just as Todd was returning from his stint in the naughty chair, the Crusaders had another man sent to the bin when David Havili was penalised for repeated infringements at the breakdown – this time not rolling away. However, the defending champions showed the character of champions to keep the Melbourne outfit at bay. Mo’unga restored the lead with a penalty after the Crusaders completely demolished the Rebels’ scrum as the visitors took a 13-10 lead in to the interval.

The Crusades have a knack of going in for the kill after half-time and that’s exactly what they did with two quickfire tries. The first came from a cross-field kick from Ryan Crotty which was gathered by Seta Tamanivalu, who played the final pass on his inside for Makalio to grab his brace with an easy run-in to the line. Mo’unga converted for a 20-13 lead.

The second came when Jack Goodhue burst over in the 51st minute after a series of powerful carries. Scott Barrett made a lovely break and offload in the build-up to give the defending champions the front-foot impetus and have the Rebels defence backtracking. Mo’unga added the extras to make it 27-10.

The Crusaders’ bonus-point try was all thanks to Tamivalu, who held up play superbly, first fending off Michael Ruru and then Jack Maddocks and managing to get the right hand free over the top for the offload to free loose forward Pete Samu for the score.

Just moments after, the Rebels were opened up once again when Sam Whitelock broke two tackles straight off the restart before openside flanker showed great support play and vision linking the play up superbly and providing the final pass for substitute scrum-half Bryn Hall to coast in untouched under the posts. Mo’unga’s third conversion of the evening gave the Crusaders a dominant 41-10 victory.

Most-capped Super Rugby player ever Wyatt Crockett put the cherry on the top grabbing the first try of his swansong season as backs and forwards combined with slick handling and intelligent movement in to space before substitute Manasa Mataele put the icing on the cake with the intercept try to close out the match 53-10. 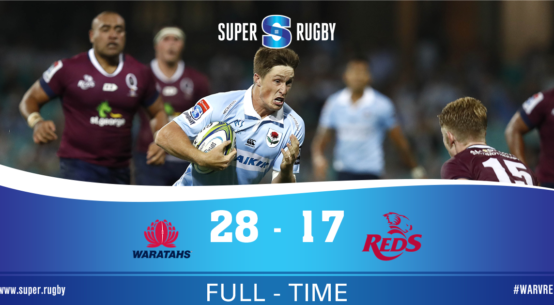