Five-try Springboks have England in their sights in rankings 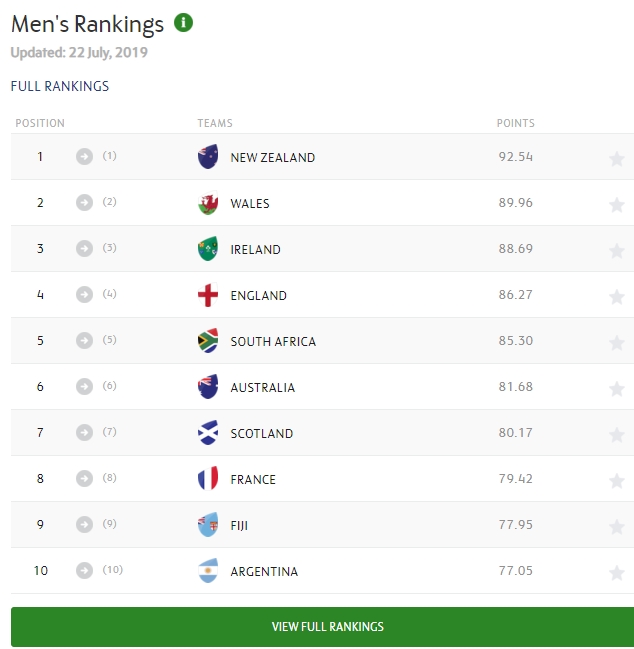 South Africa close in on fourth place in the World Rugby Rankings with victory over Australia, while New Zealand survive a scare to keep their unbeaten record against Los Pumas intact.

Argentina narrowly failed to take the scalp of the All Blacks for the first time in history in Buenos Aires on Saturday, and in doing so missed out on the chance to climb the World Rugby Rankings.

An improvement of at least one place was on offer for an historic Los Pumas victory against the world champions – two if the margin was more than 15 points – but despite keeping Steve Hansen’s side scoreless in the second half, they fell just short and had to settle for a losing bonus point in a 20-16 defeat. Instead, Argentina stay in 10th place in the rankings with the All Blacks on track to mark an unbroken decade at the top later this year.

Tries from Nagani Laumape and Brodie Retallick and two conversions and a couple of penalties from Beauden Barrett helped the All Blacks into a 20-9 interval lead. Argentina’s points came from two Nicolás Sánchez penalties and a long-range effort from Emiliano Boffelli.

Boffelli’s converted try seven minutes into the second half cut the deficit to just four points but, despite a concerted period of pressure, that was as close as Mario Ledesma’s side got to achieving an elusive first test win over the All Blacks at the 29th attempt.

While Argentina may never have a better chance of ending their barren run against New Zealand, Australia were always playing catch up rugby in the other Rugby Championship fixture as they strove to end their 56-year wait for a win against South Africa at Ellis Park in Johannesburg.

Scrum-half Herschel Jantjies grabbed a brace on his test debut and Lood de Jager, S’bu Nkosi (pictured) and replacement Cobus Reinach joined him on the scoresheet, Elton Jantjies converting all five tries in a 35-17 win for the Springboks. Dane Haylett-Petty finished off a good first-half move before Bernard Foley added a second try late on for the Wallabies.

South Africa picked up just over seven-tenths of a rating point for the victory to reduce the gap between themselves and England, the side immediately above them in fourth, to just under one point. Following the defeat, seventh-place Australia’s cushion over Scotland is down to one-and-a-half points.