Team with strong New Zealand accent beats Seawolves 30-15 on a baking day in Jersey, as US competition concludes season five

The small crowd at the Red Bull Arena in Harrison, New Jersey indicated the work ahead if MLR is to become a major player on the US stage, never mind the world, before a Rugby World Cup in 2031. But then, the city back over the Hudson wasn’t always full of skyscrapers. Someone had to put them up.

After New York’s victory over the Seattle Seawolves, outside a locker room drenched in champagne, New York’s chief executive, Ric Salizzo, told the Guardian: “We knew that there were lots of people watching back home” – in New Zealand, source of the spine of the team – “and watching in the UK and Ireland, and we wanted to show them American rugby is on the way up.”

If so, this was the place to show it: a season finale on Fox. From the off, New York and Seattle, twice champions before, gave it all they could. Both teams attacked. Both sets of fans made noise.

Seattle struck first, working left and right until AJ Alatimu, their Samoan fly-half, saw an overlap for Martin Iosefo. The wing, a US sevens Olympian, cruised over the line. New York’s response was rather more, well, blue-collar, pugilistic raids sending the Kiwi flanker Will Tucker smashing over. Then Alatimu kicked a penalty and Jason Emery missed one, for 8-7 Seattle after 20 absorbing minutes.

Then came the first hydration break, as the temperature pushed 90F (32C) at pitch level. If the breaking of the game into four quarters seemed very American, it also seemed very fitting. And wise.

Next, a penalty try. New York drove a line-out, the maul went down in a flurry of bodies and limbs and the referee, Federico Anselmi, ran straight to the posts. Rhyno Herbst, Seattle’s appropriately named South African lock, saw a yellow card: 14-8 New York.

Seattle were struggling for possession even with Herbst on the field. Prompted by the former All Blacks scrum-half Andy Ellis, playing the last game of his long career, led by the Irish-born US hooker Dylan Fawsitt, the New York pack turned the screw.

Ellis had two more World Cup-winning All Blacks outside him, the full-back Nehe Milner-Skudder and wing Waisake Naholo. Both threatened – and the New York fans realised you can sing “Waisake Naholo” to the tune of Seven Nation Army by The White Stripes – but it was Ellis who got the try to capitalise on the one-man advantage. From a short-side break the fly-half Jack Heighton, another Kiwi, sent his halfback partner over.

The half closed with Seattle on the attack. This time New York held.

The break was a chance to ponder the future of a league dogged by controversy, after the disqualification of Austin and Los Angeles, the top two teams in the west. There is a lawsuit, filed by Adam Gilchrist, the Australian owner of the Gilgronis (Austin) and Giltinis (LA). No guilt – or Gilt – or otherwise has yet been established. World-round, rugby is beset by politics and power-struggle. Welcome to the club, MLR.

In the second half, New York went for the kill. Kalolo Tuiloma, a prop, got desperately close. Seattle held but couldn’t escape their 22. Emery kicked a penalty for 22-8.

Iosefo and Riekert Hattingh, the Seawolves’ captain and No8, a South African-born US Eagle, worked to reverse the tide, attacking the short side dangerously. But the Seattle backs could not hold the ball and soon Emery and Andrew Coe, New York’s Canadian wing, were streaking back upfield.

The try came from Nic Mayhew, a Kiwi prop, after a break from Tucker, the Kiwi flanker, and a clever reverse pass from Brendon O’Connor, another Kiwi flanker, once of Leicester. There are those who chide Rugby New York as the “New Jersey All Blacks”. They do play in Jersey but it was their journeymen Kiwis who shone.

Salizzo said: “We actually come from nine different countries. Having a group of Kiwis that play in a certain style helps. But you think of the quality of our American players – Nick Civetta, Nate Brakeley, Chance Wenglewski, Dylan, Ben Bonasso – they’re all Eagles in the pack. They were outstanding today. I’m proud to just watch them.”

The Seawolves weren’t sunk: Samuel Matenga, the tighthead prop, galloped over for a try and 27-15. They broke again and Will Tucker saw yellow for killing the ball. From the scrum Brad Tucker, Will’s brother, on from the Seattle bench, scrambled over the line. A try would have brought the Seawolves within a score but it was called back on TV replay.

There was still life in a game played with a hiss-and-roar despite the withering heat. Kaleb Geiger, New York’s sub hooker, was playing baseball in Colorado not long ago and has learned rugby in less than two years. He had some line-out wobbles but held up under scrum pressure and put in a big hit or two. Mayhew won a turnover and Milner-Skudder kicked upfield. Sam Windsor, an Australian on at full-back, dropped a goal for 30-15.

Before the end, the tannoy was playing Glory Days by Bruce Springsteen. When in Jersey. Once the whistle went, the DJ switched to Sinatra. New York, New York were champions of MLR. Their New Zealanders performed a haka for Ellis.

Marty Veale, the New York head coach, was once a fearsome lock forward in New Zealand, Japan and England, where he played a couple of seasons for Wasps. Amid the sprayed champagne and shotgunned beers of the locker room, he summed up in suitably hard-nosed style.

“We got to the business end and we played finals footy and we were good for three weeks in a row. That was all we needed.” 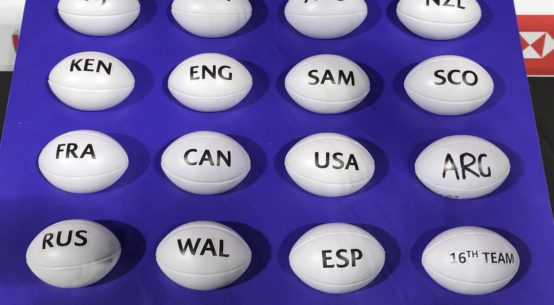