The 35-strong squad is as follows (with age, Investec Super Rugby club, province and Test caps.  New All Blacks in bold):

In naming the squad, All Blacks Head Coach Ian Foster said: “We’re hugely excited at the calibre of the players selected for this All Blacks squad of 2020.  It’s been a great process working through the selections and I’ve really enjoyed working with ‘Plums’ (John Plumtree) as part of the new selectors group.

“Plums, Foxy and I have been as excited as everyone at the rugby we have seen in what has been an incredibly difficult year for everyone.”

“The result is that we can now announce a team that is rich in experience and a little battle-hardened after the Rugby World Cup, but forward looking with the inclusion of a number of new players. We’re delighted with the balance of the group and we look forward to whatever the challenges of 2020 throw at us.

“On behalf of Foxy and Plums, I want to congratulate all the players named today and particularly the seven new caps.  This is a really special day for Alex, Quinten, Tupou, Cullen, Hoskins,  Caleb and Will and their families and we congratulate them all.  All seven have walked a slightly different path to get here, but the common thing for all of them today is that feeling of hearing  your name read out as an All Black.”

Foster also added: “I’d also like to again formally congratulate Sam Cane on the captaincy.  We’ve already been excited and impressed with his work and I know he is determined to do a great job for his team and his country.”

As well as the new caps, the squad also features the return of a number of players who have worked their way back into the All Blacks side, including 2017 All Blacks Asafo Aumua and Akira Ioane and 2018 breakout prop Karl Tu’inukuafe.

“We’re really happy for this group of players as well.  They all got an opportunity several years ago and have worked incredibly hard to get back into the team, so we congratulate them.” Foster said.

“As always there are players who will be really disappointed at missing out, and that is just a reflection of the incredible depth we have in New Zealand.”

Foster said, like all rugby fans, the team was waiting for the All Blacks schedule to be finalised, with SANZAAR to confirm the Test programme in due course.

“Like everyone else, we’re impatient to know what is happening, but we fully understand all the variables at play and we remain confident that there’ll be something for fans to look forward to in the not-too-distant future.”

Foster said, in the meantime, the All Blacks would return to their Mitre 10 Cup provincial sides for the opening weekend of New Zealand’s premier domestic competition.

“Our players are really excited to be playing for their provinces and this will be a great competition for fans to enjoy over the next few months.”

The squad is made up of ten Blues players, six Chiefs, five Hurricanes, 11 Crusaders and three Highlanders, while 11 of New Zealand’s Mitre 10 Cup provinces are represented: eight players from Auckland, seven players from Canterbury, five from Tasman, four from Wellington, three from Taranaki, two from Waikato, and one each from Northland, North Harbour, Counties Manukau, Bay of Plenty, Hawke’s Bay and Manawatu.

The new All Blacks – mini bios

Alex Hodgman
Born and raised in Auckland, Alex Hodgman travelled south to begin his professional career, making his debut for Canterbury in 2014. The 27-year-old prop won three Mitre 10 Cup titles with the red and blacks and notched up nine Super Rugby caps for the Crusaders before returning home to Auckland. Hodgman is a now a regular feature for the Blues and Auckland and is a powerful scrummager with a high workrate around the field.

Quinten Strange
A former Nelson College First XV captain, Quinten Strange is an athletic lineout forward that has been earmarked for a big future. After an impressive campaign with the New Zealand Under 20 team in 2016, Strange debuted for Tasman later that same year, playing in 11 matches and securing an Investec Super Rugby contract with the Crusaders. It looked as though his 2020 season would be cruelly ripped away with a pre-season injury, but Strange returned to make five appearances in Investec Super Rugby Aotearoa.

Tupou Vaa’i
A former Wesley College Head Prefect and First XV captain, Tupou Vaa’i is the latest player to etch their mark in the school’s proud history of producing All Blacks. Vaa’i made his provincial debut for Taranaki as an 18 year old in 2018 and the following year made six appearances for the New Zealand Under 20 side. In 2020 Vaa’i stepped up to Super Rugby, playing all seven matches in Investec Super Rugby Aotearoa and emerging as bright prospect which the Chiefs recognised in extending his contract through to 2023.

Cullen Grace
Born in Hawera and raised in Timaru, Grace made his Investec Super Rugby debut in 2020 and immediately caught the attention of national selectors as a hard-nosed, dynamic loose forward, with 87 tackles and 45 carries in his debut season. A thumb injury sidelined Grace for much of Investec Super Rugby Aotearoa but he made a successful return to the field for Canterbury in their Ranfurly Shield defence against North Otago in August. Grace captained the Canterbury Under 19 side in 2018 and last year was a member of the New Zealand Under 20 side.

Hoskins Sotutu
22-year-old loose forward Hoskins Sotutu spent most of his rugby growing up playing in the backline, emulating his father Waisake who also played for Auckland and the Blues. It was only in the later stages of his schooling that Sotutu moved to the forward pack and he has since gone on to play for the New Zealand Under 20s, Auckland in the Mitre 10 Cup and made his Super Rugby debut off the bench in 2019. This season Sotutu turned heads as a powerful ball carrier and relentless defender. He was among the competition’s best with more than 100 carries and 80 tackles.

Caleb Clarke
Caleb Clarke was in scintillating form during Investec Super Rugby Aotearoa and was one of the best performers for the Blues in his six appearances in 2020. The son of 1992-1998 All Black Eroni, Clarke is an explosive winger who has a knack of claiming silverware, leading Mt Albert Grammar to the National 1st XV title in 2016 and as a member of the New Zealand Under 20 team that claimed the World Championship in 2017, the Auckland Mitre 10 Cup-winning side in 2018 and this year’s World Series winning All Blacks Sevens team.

Will Jordan
Will Jordan was one of the most talked about players in 2020, with his natural flair and x-factor a key feature in the championship-winning Crusaders backline. A product of Christchurch Boy’s High School, Jordan was a member of the 2017 New Zealand Under 20 side that went on to win the World Championship and also made his debut for Tasman later that same year. His eye-catching form in the 2019 Mitre 10 Cup season saw Jordan help Tasman to their first ever premiership title, and that form was carried through to 2020, as Jordan finished the Investec Super Rugby Aotearoa season with the most tries, defenders beaten and metres gained. 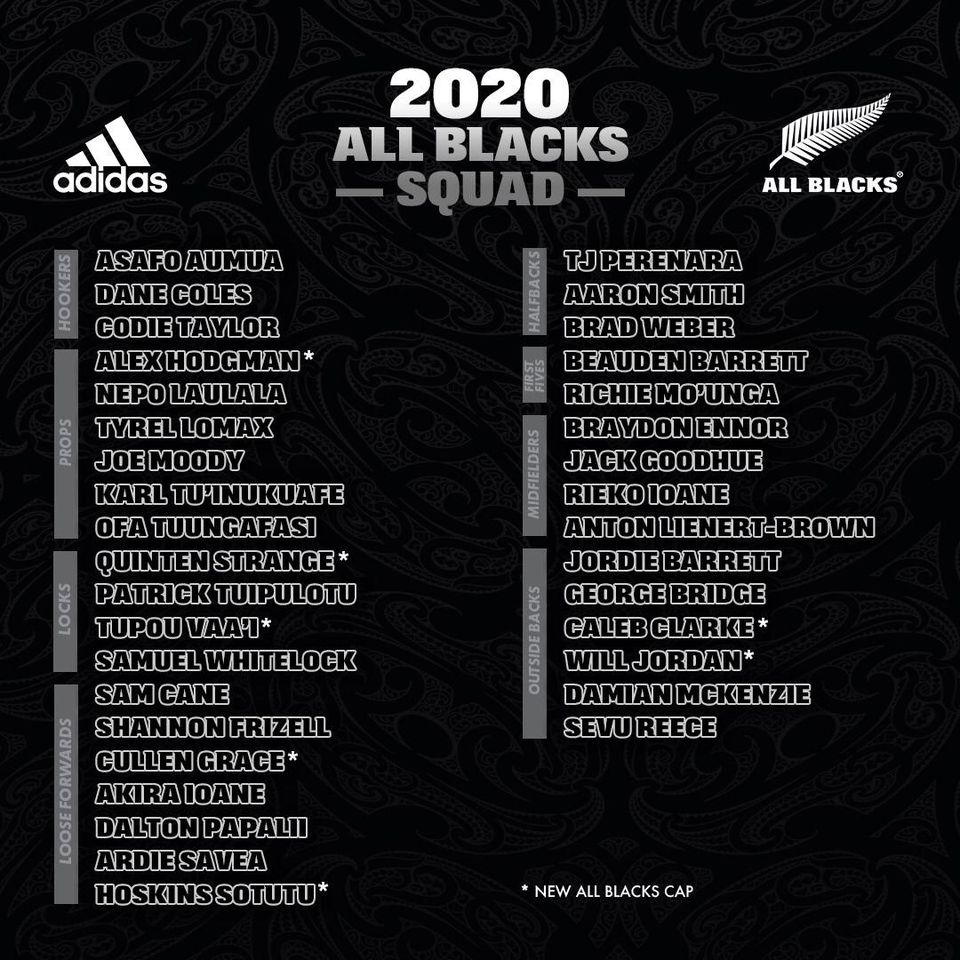