Absolute dominance, despite tough Argentine defence, saw the All Blacks retain their lead in the Fortinet Rugby Championship with a 39-0 bonus point win on the Gold Coast on Sunday.

Scoring five unanswered tries, the All Blacks could take satisfaction from the fact Argentina’s only scoring chance was a missed 50m penalty goal attempt by five-eighths Nicolas Sanchez who, worryingly for them, left the field in the second half with a lower leg injury.

It was a physical contest, the All Blacks committing Argentina to making 208 tackles to 108 while they missed only nine compared to 29 missed by Argentina.  New Zealand made 702 metres to 186 and won 10 turnovers to six. 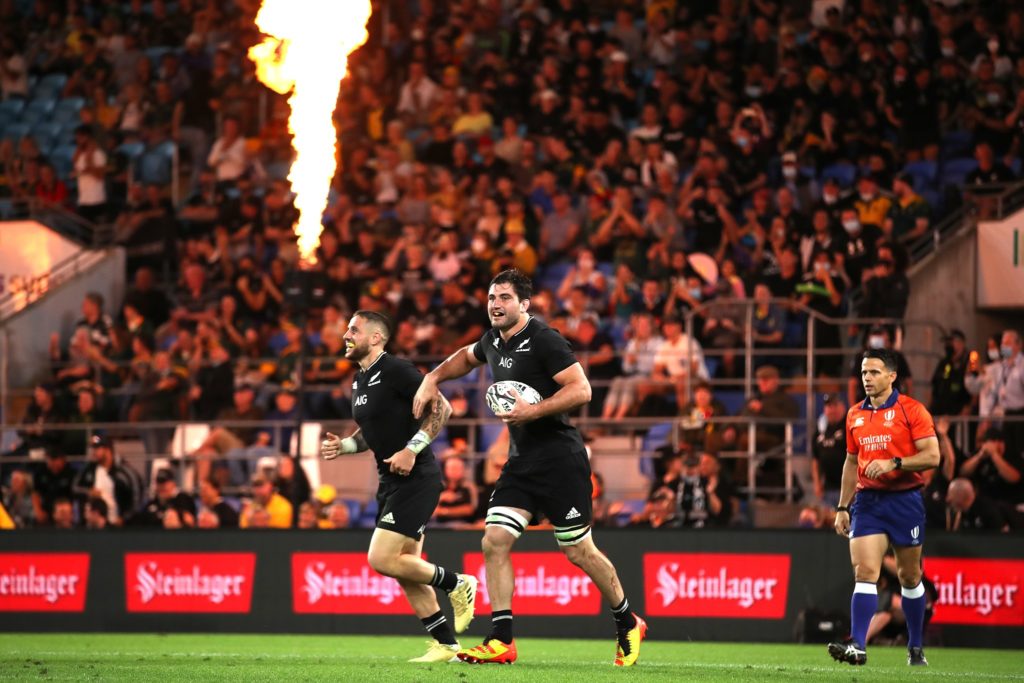 After doing the hard graft in the first half, the All Blacks opened the second half with a stunning try that highlighted the difference between the sides. Halfback TJ Perenara took a quick tap penalty on his 22 line, threw the ball wide for second five-eighths David Havili who gave the ball to dangerous centre Rieko Ioane, who had come into the starting line-up when Anton Lienert-Brown had a hamstring issue.

Ioane raced downfield with wing George Bridge carrying play on. The Pumas were stretched and first five-eighths Beauden Barrett cut his capers through the midfield before firing an audacious backhand pass to No8 Luke Jacobson who scored and with the conversion New Zealand led 29-0 after 45 minutes.

But the verve went out of the game as substitutes were introduced, the All Blacks, with their intense programme in mind, replacing key players early.

The Argentine side lost their shape and had no attacking opportunities as they struggled with their discipline, losing replacement prop Carlos Muzzio to the sin-bin, and the intensity of the All Blacks play.

Finally, after a long period in the Argentine 22m area, the All Blacks scrum came up with the power to give Jacobson a run at the line which he took to score his second in the 68th minute.

But the game was won in the first half. Rugby doesn’t come more demanding than that played out during the first 40 minutes. 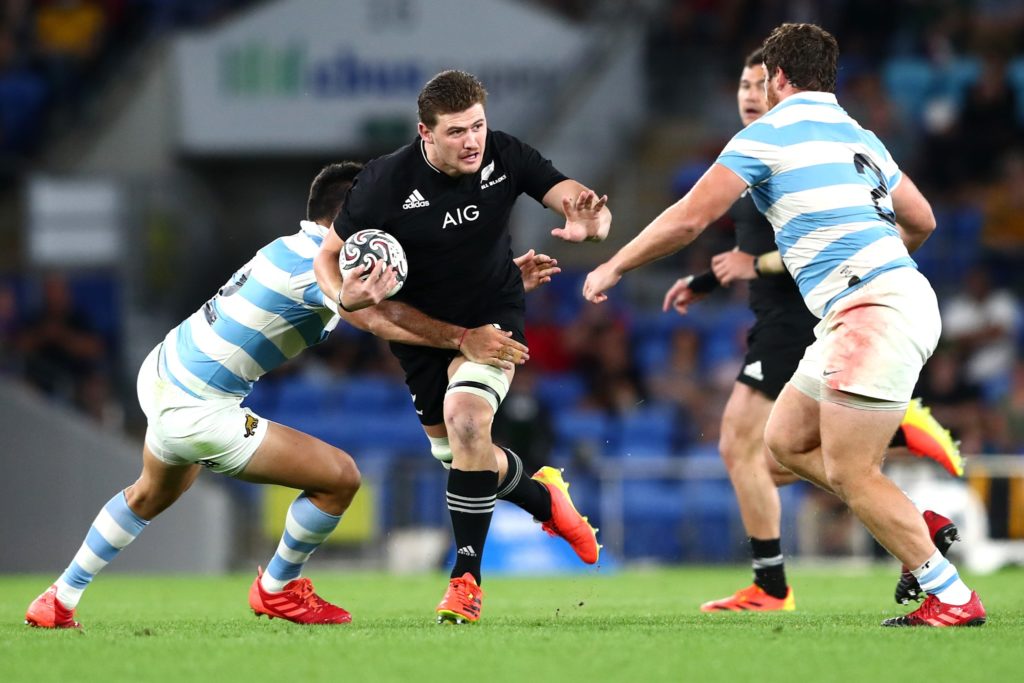 their defence line. The Pumas were forced to make 133 tackles to 45 as the All Blacks enjoyed a 70 per cent possession advantage with only one scrum in the half.

Hooker Asafo Aumua was like an unrelenting battering ram running hard at big Pumas defenders every time he got the ball. Replacement Samisoni Taukei’aho was little different when coming on.

Props Karl Tu’inukuafe and Nepo Laulala had to do plenty of work with the ball in hand while lock Scott Barrett and Luke Jacobson also got their hands on the ball consistently.

Skipper and lock Brodie Retallick was picking off turnovers to gain penalties at the breakdown while the need to put bodies on the line was also seen from the backs with first five-eighths Beauden Barrett taking the ball forward several times.

Second five-eighths David Havili and centre Rieko Ioane also looked to create openings with strong runs. There was plenty of ball to play with as the All Blacks won 78 rucks to 29 in the first half.

There was a breakthrough in the ninth minute when a Beauden Barrett pass to Ioane was knocked down by Argentine wing Bautista Delguy, but Ioane got a foot to it, and then sped after the ball to the in-goal to score.

It was another 27 minutes before they scored again when wing Sevu Reece was rewarded for his propensity to look for work when he somehow got over the line when getting lower to the ground than the Argentine front row guarding the goal-line.

Just before the halftime break, Argentine flanker Pablo Matera was sin-binned and from the lineout penalty play, the All Blacks crossed again when flanker Dalton Papalii got across in a driving maul.

The teams meet again in Brisbane on Saturday, and the All Blacks have a huge confidence boost to take with them. 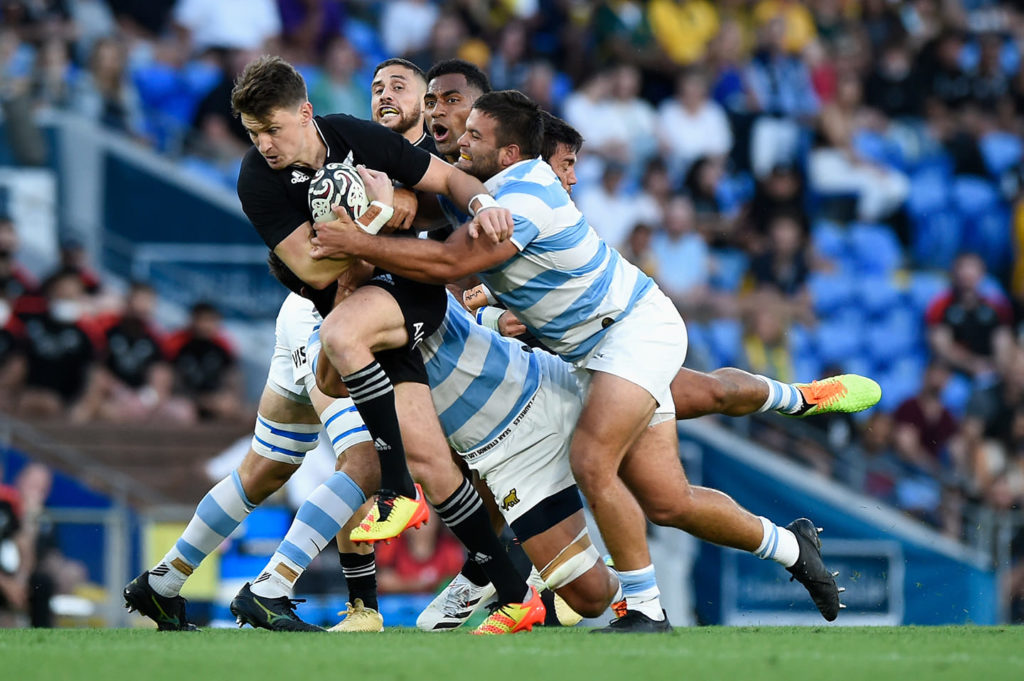