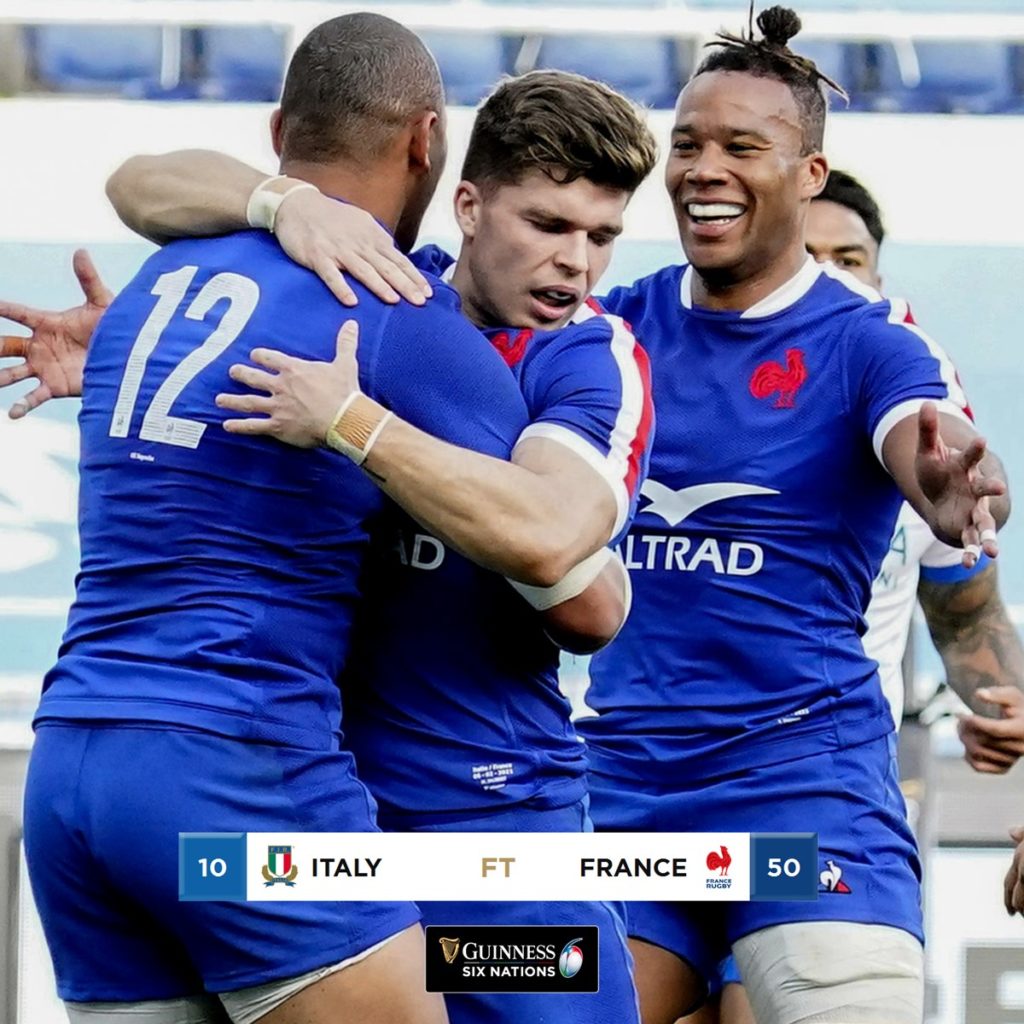 The talented scrum-half and 2020 Player of the Championship carried on where he left off as he set up all three first-half tries for the visitors as they stormed into a 24-3 half-time lead.

Dylan Cretin, Gaël Fickou and Arthur Vincent were the men who profited from Dupont’s vision before Brice Dulin joined the party after the interval to clinch the bonus-point score.

Dupont then capped off his performance with a try of his own before providing another assist to Teddy Thomas, with Jalibert adding 15 points from the tee with a perfect kicking display.

Italy claimed a consolation try through Luca Sperandio but Thomas scored his second of the game in the closing minutes as Fabien Galthié’s side issued an emphatic statement of intent to their rivals.

Smith had named a starting XV with just 134 caps between them but that figure was reduced by a further ten caps when prop Cherif Traore was replaced by debutant Daniele Rimpelli.

That injury setback did not stop the Azzurri from making a bright start to the contest, though, with another debutant in Juan Ignacio Brex cutting through the France defence early on.

But it did not take long for France to show their class, with Thomas going on his own weaving run to leave a trail of Italy players in his wake before the ball was recycled.

With the hosts on the back foot, Les Bleus moved the ball left swiftly through Gabin Villiere before Cretin was able to muscle his way over the whitewash under the posts.

Jalibert slotted the extras on his fifth start for France, three years after his debut against Ireland, before adding another penalty on 11 minutes after a breakdown infringement. 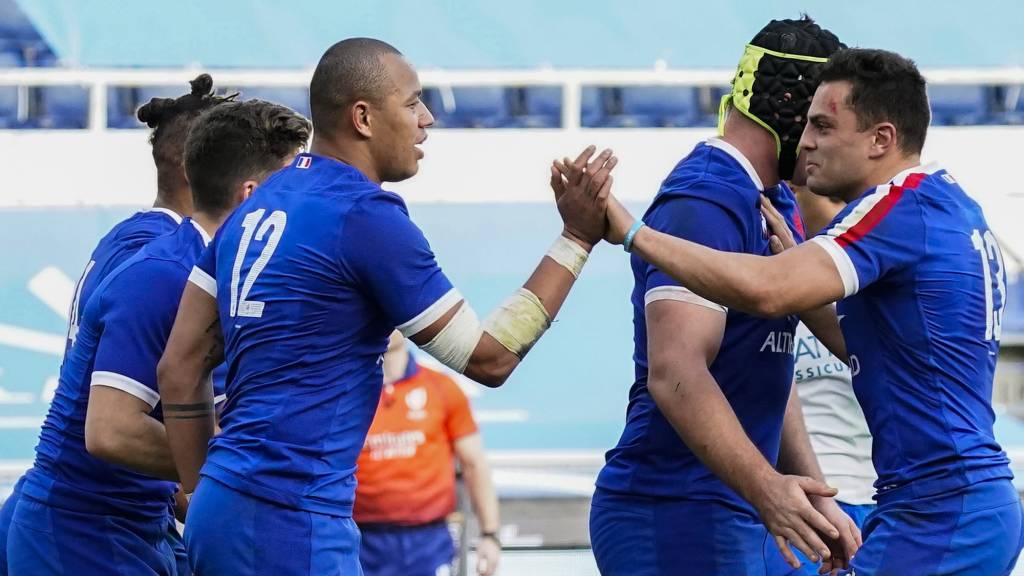 Italy continued to throw the ball around despite the scoreboard looking ominous and after a series of phases, the home side forced a penalty which Paolo Garbisi slotted to cut the deficit.

Their response was met with another wave of blue shirts and just two minutes after Garbisi had opened his side’s 2021 account, France hit back with their second try of the game.

A rolling maul gained valuable ground before  Dupont spotted a gap in behind and nudged the ball through for Fickou to collect and run in, with Jalibert adding the conversion.

With Dupont’s creative juices flowing, the France scrum-half sprinkled his magic once again on 29 minutes after a loose Italy pass provided the visitors with a chance to counter.

Les Bleus hacked the ball downfield and Villiere found Dupont, who took the ball into the challenge before perfectly timing the offload to Vincent for the centre to dot down under the posts.

Jalibert made no mistakes with the conversion but Italy almost delivered an instant riposte when Monty Ioane sprinted over – only for the try to be ruled out by a forward pass in the build-up.

Italy’s frustrations were compounded further by an injury to 20-year-old Garbisi, who was replaced by Carlo Canna as France went into the break with their tails up and a 24-3 lead.

Thankfully for Italy, Garbisi was able to return to the field for the second half and he soon showed why he is so highly rated after slicing through France before conceding possession.

And as was the case in the first half, Italy’s early promise was countered by France’s ruthlessness – and the visitors clinched the try bonus-point within ten minutes of the restart.

The Azzurri launched the ball into Les Bleus’ territory and the grateful arms of Dulin, who ran the ball back before getting on the end of Villiere’s kick to score in the corner.

Jalibert made it five from five with the conversion and soon Dupont had the try his performance deserved, with Thomas feeding the scrum-half on his inside to score under the posts.

Another Jalibert conversion was swiftly followed by Dupont returning the favour to Thomas, cutting through a gap in the Italy defence before throwing wide to the winger to run in unopposed. 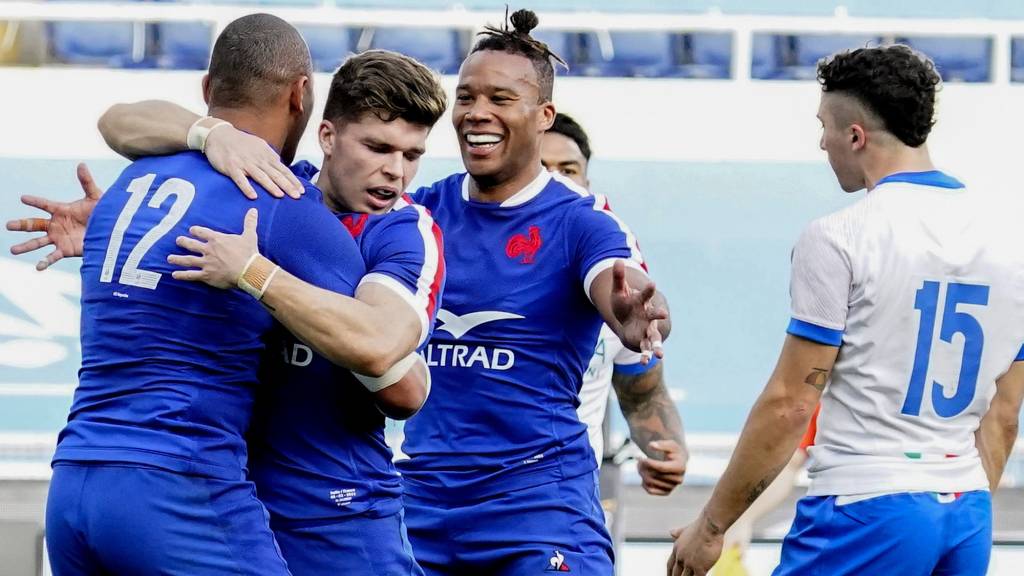 With the result beyond doubt, Dupont was rested by Galthié as reward for his efforts as the hour mark approached, providing Baptiste Serin with an opportunity to shine in his place.

But Italy refused to back down and the hosts scored a well-deserved consolation through Sperandio on 63 minutes after the winger executed a perfect chip and chase.

Garbisi added the extras but it was France who had the final say as Thomas scored his second of the game to bring up the half-century of points and complete an impressive all-round display.

Who else but Antonie Dupont?

Dupont set up all three of France’s first-half tries and provided another assist to Teddy Thomas after the restart, having also scored a try of his own in a near-flawless display.

He finished the game with four carries, 62 metres, two tackle breaks and two offloads as Fabien Galthié rested his star man with 20 minutes still to play. He was a class above.

The ten minutes after Paolo Garbisi struck Italy’s first points of the 2021 Championship proved decisive as France scored two quickfire tries to take the game away from the hosts.

Dupont was at the heart of both scores, providing a brilliant kick through to Gael Fickou for France’s second try before delivering the killer pass for Arthur Vincent’s effort.

Les Bleus suddenly found themselves with a 21-point advantage at the break and they never looked back as Dupont added the finishing touches with another try and assist after the restart.