Skip to content
You are here
Home > Italy > REPORT: Superb Scotland run in eight tries to beat Italy in Edinburgh

The Azzurri stunned the hosts when skipper Luca Bigi crossed for an early try after seven minutes but Scotland replied with two quickfire scores from hooker Cherry – making his first start for Scotland – and Van der Merwe to take the lead.

A yellow card for Italy centre Federico Mori then allowed Scotland to take the game by the scruff of the neck, extending their lead to 24-10 with further tries from Darcy Graham and Huw Jones.

Cherry crossed for his second of the afternoon soon after the restart before Italy’s indiscipline saw them briefly reduced to 13 men as both Sebastian Negri and Monty Ioane were shown yellow.

Scott Steele took advantage to emulate Cherry by scoring a try on his first Scotland start while further tries from Sam Johnson and Van der Merwe completed a record win over Italy.

SCOTLAND BOUNCE BACK FROM EARLY TRY

The Azzurri began brightly and, despite Paolo Garbisi missing a regulation kick to touch from a penalty, early Scotland indiscipline soon provided another opportunity for the visitors.

This time Garbisi atoned for his error by launching a kick into Scotland’s corner following a penalty for a high tackle and the Italy forwards got to work with a driving lineout maul.

With the attacking foundation set, captain Bigi capitalized to hold off Graham and squeeze over the whitewash in the corner, with Garbisi landing a superb conversion from out wide.

The score appeared to wake Scotland from their slumber and it was not long before the hosts hit back, with a rumbling maul of their own seeing Cherry score a try on his first start.

Hogg was unable to convert from his first attempt at goal but Scotland completed a rapid turnaround with their second try in three minutes to take the lead for the first time.

Starting with a scything break from Jones through the middle of the blue shirts, the ball was recycled and fed wide to Van der Merwe who raced down the wing before touching down.

The conversion was added by stand-in No.10 Stuart Hogg to extend Scotland’s lead to 12-7 before Garbisi cut the deficit with a simple penalty after Zander Fagerson was penalised at the breakdown. 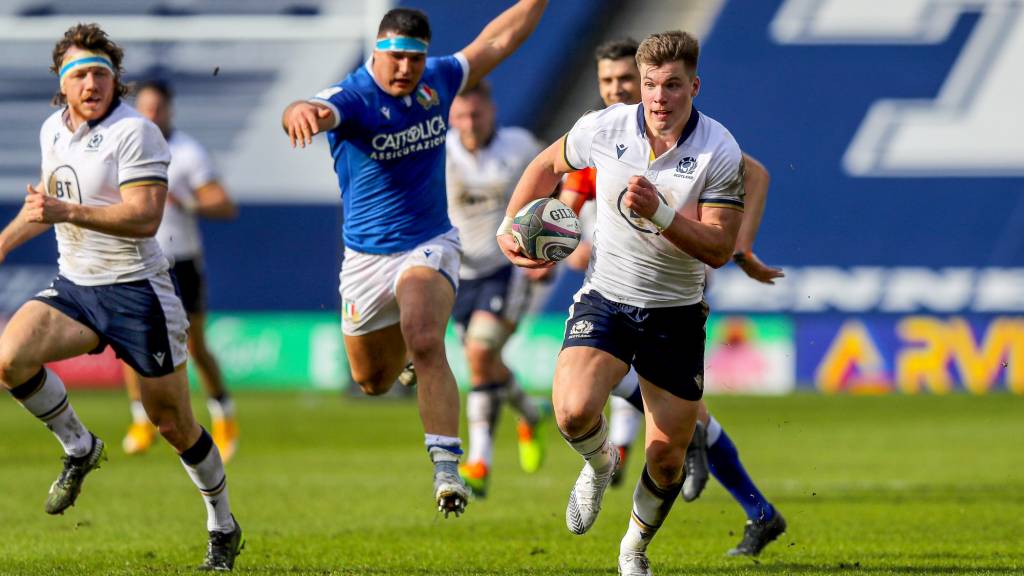 But the momentum swung heavily in favour of the home side on 20 minutes when Federico Mori, on his first start for the Azzurri, was sin-binned for a shoulder charge on Johnson.

Scotland took advantage of the extra man almost immediately, with Sean Maitland making the initial break before finding Jones, who was denied a try by Edoardo Padovani.

Padovani could not stop Jones from popping the offload to the onrushing Graham off the deck, however, and the winger was able to waltz over for Scotland’s third try.

With their tails now up, the hosts continued to pile the pressure on and, while a monstrous tackle from Ioane briefly halted their progress, the bonus-point try soon arrive.

On the cusp of the half-hour mark, Van der Merwe produced another powerful run before Hogg flicked the ball brilliantly to Jones to allow the centre to run in unopposed under the posts.

It was nothing more than Jones deserved for his first-half display and Hogg’s conversion ensured Scotland stretched their lead to 24-10 before Mori returned to the field.

Hopes of an Italy comeback were dashed within five minutes of the restart.

Garbisi set the tone for the half after kicking the ball straight out before the Azzurri were pinged at the resulting scrum, giving Scotland a chance to reach the Italy 22.

From there, Scotland showed their might with a successful driving lineout maul which resulted in Cherry’s second try of the game as the hooker dotted down and Hogg converted.

Italy’s afternoon went from bad to worse on 51 minutes when Negri was shown yellow for slapping the ball forward with Scotland eyeing up another try from 5m out. 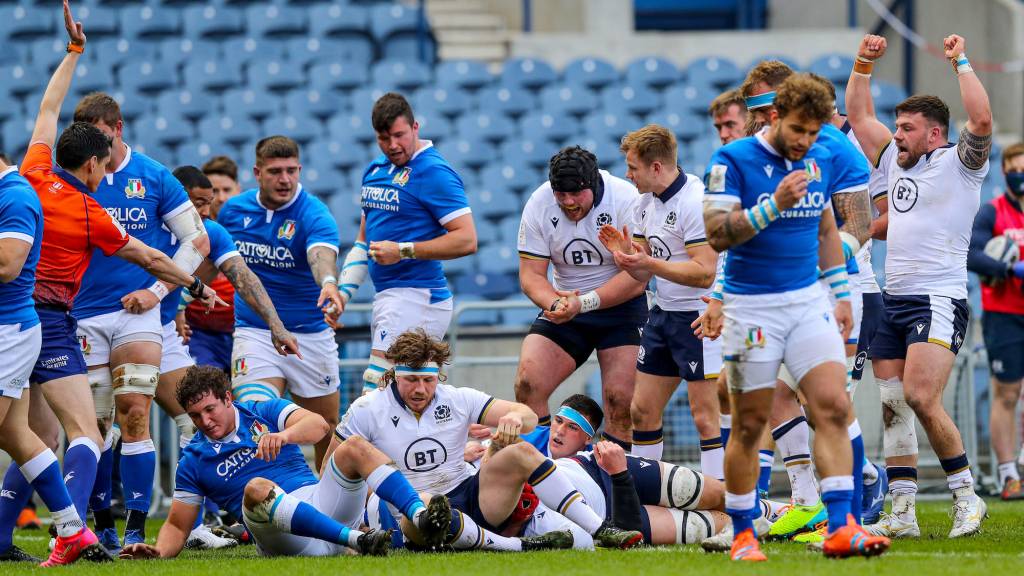 Once again the hosts showed their killer instinct to grab a fifth try on 53 minutes after a series of pick-and-goes resulted in Steele sniping from close range for a first try on his first start.

Hogg converted to extend his side’s lead to 38-10 before Italy were briefly reduced to 13 men when Ioane was given his marching orders for a dangerous tackle on the Scotland skipper.

Van der Merwe came within a whisker of his second try of the game on 63 minutes after a superb through-the-legs pass from Hogg put him in the corner, only for the winger to be held up.

Scotland showed no let up, though, and soon broke Italy’s resistance again when Johnson shrugged off the challenge of Bigi to crash over from close range, with Hogg converting.

And Van der Merwe finally completed his double on 71 minutes after the hosts turned defence into attack with a breathtaking break from a turnover within their own 22.

Replacement Ali Price sniped around the ruck and sprinted down the left wing before delaying his offload perfectly for Van der Merwe to collect and run in for his second try.

Hogg added the extras once again and despite a late Italy rally, Scotland secured all five points to keep their hopes of a second-place finish alive ahead of their rearranged Round 3 match with France.

MOMENT OF THE MATCH

The ten minutes during the sin-binning of Federico Mori proved decisive as Scotland ran in two tries to take the game away from Italy after promising start from the visitors.

It took no time at all for Scotland to capitalize on the extra man as the white shirts piled forward from a Sean Maitland break before Huw Jones put in Darcy Graham for the try.

And the bonus point followed on 28 minutes as provider turned scorer, with good work from Duhan van der Merwe and Stuart Hogg paving the way for Jones to dot down the bonus-point try.

Several Scotland players could have been named Player of the Match, including brace tryscorers Duhan van der Merwe and Dave Cherry who both enjoyed brilliant performances.

Huw Jones was also a constant menace in the midfield but ultimately it was the hard grafting Hamish Watson who took the prize as he continued a fine 2021 Championship.

Watson racked up 21 carries for 120 metres as he provided the hosts with plenty of go forward in attack while he also contributed to a solid defensive effort with his presence at the breakdown. 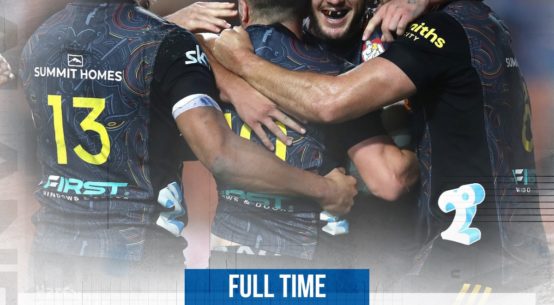 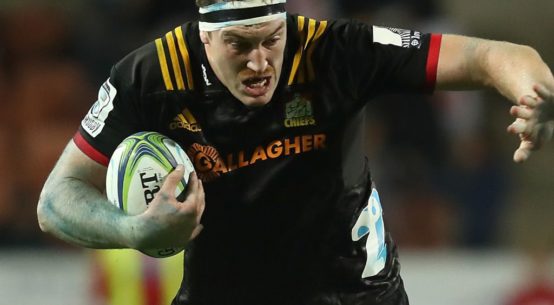