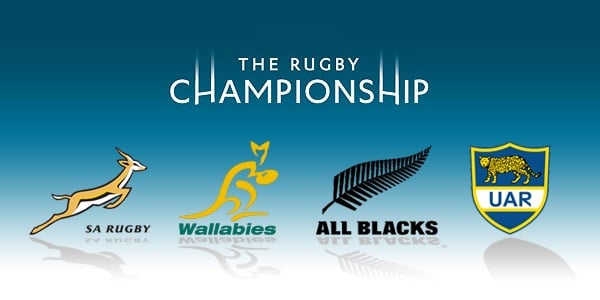 It wasn’t quite the thrashing and 80 minute performance that at one stage they threatened and some might also quibble about a missed bonus point but the Springboks should nonetheless feel satisfied with a 29-10 Castle Lager Rugby Championship win over Argentina that ensured a winning end to a successful home season.

Of course, it might not be the end of their home run, for there is a possibility the balance of the Championship, which is now shrouded in doubt because of the New Zealand and Australian government reaction to Covid outbreaks in the respective countries, could end up being played in South Africa.

If that is the case the Boks could become outright favourites in a tournament which they are already doing well in as they follow up their recent success in the British and Irish Lions series by continuing to steamroller forward.

And steamroller is probably the best way to put it, for it was another showing of brute force as they shut out the Pumas from the outset. 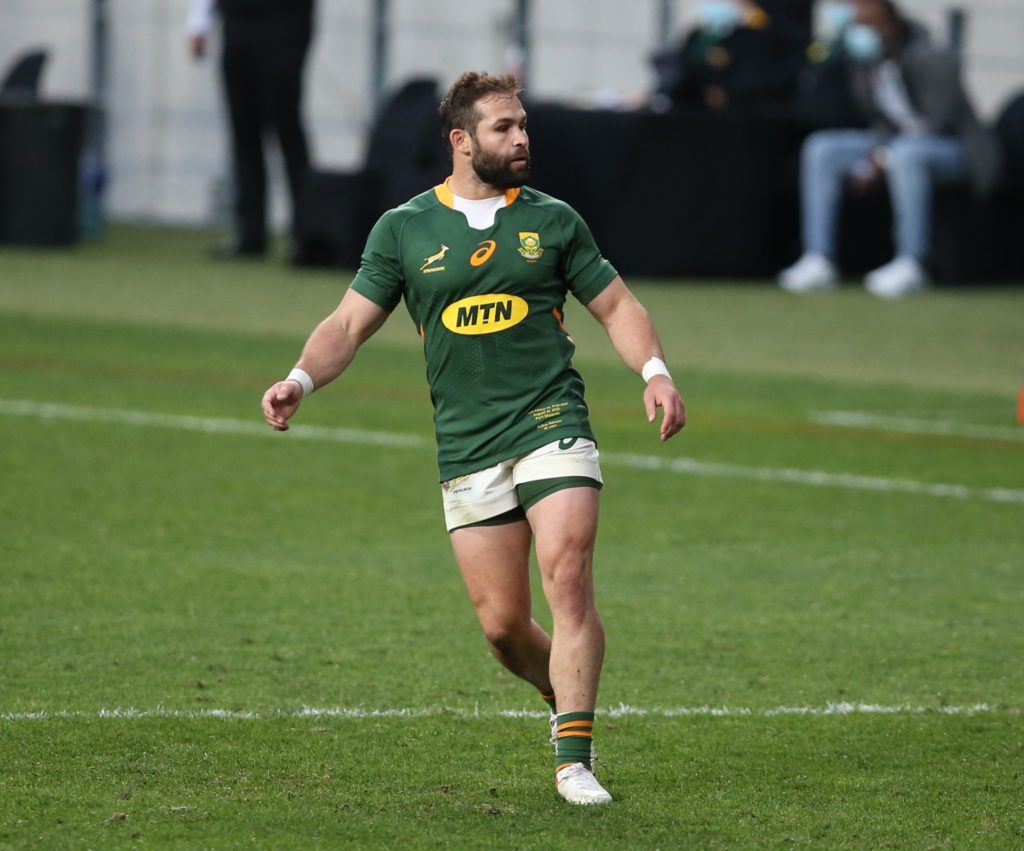 The Boks looked pretty tired at the end, and were reduced to 14 men for the last 10 minutes due to the injury that forced reserve scrumhalf Jaden Hendrikse to be stretchered from the field on a motorised cart.

That is the one drawback of the six/two split between forwards and backs, it can leave you exposed.

But perhaps that should have been anticipated as the Boks came to the final furlong after five heady weeks where they have done all that could be expected from them by South African fans given the long period of inactivity and the Covid outbreak that prefaced the start of the British and Irish Lions series.

The Boks lost a bit of shape and their authority towards the end, and gave away a try that looked unlikely for most of the way right at the death, with Pablo Matera going over off a forward drive near the posts off the last play of the game.

The Boks had earlier wasted opportunities to score the bonus point try by overthrowing at an attacking lineout and flyhalf Handre Pollard also kicked a penalty into touch in goal.

That the Boks would be needing to pull out the stops in the final minutes in their quest for that bonus point looked unlikely for most of the game, particularly when they scored two tries relatively early in the second half to take them into a 29-3 lead.

At that point it looked like this game was a perfect example of the subdue and penetrate rugby that has been the staple of Bok teams for more than a century.

The subdue part came in the first half as the forwards place a vice-like grip on the game in the set phases and with their driving maul and the team as a whole contributed to the subdue aspect with their domination of the contact points and their kicking game.

That there was going to be an emotional response from the Pumas to the previous week’s 20 point defeat was telegraphed in the passionate way they sung their national anthem but apart from a few initial minutes where they threw everything at the Boks, the pressure was quickly transferred and the South Americans were simply shut out of the game.

What was well organised and determined in that initial period though was their rush defence system, so the Boks would quickly have figured that it would take a while to break the Pumas down. 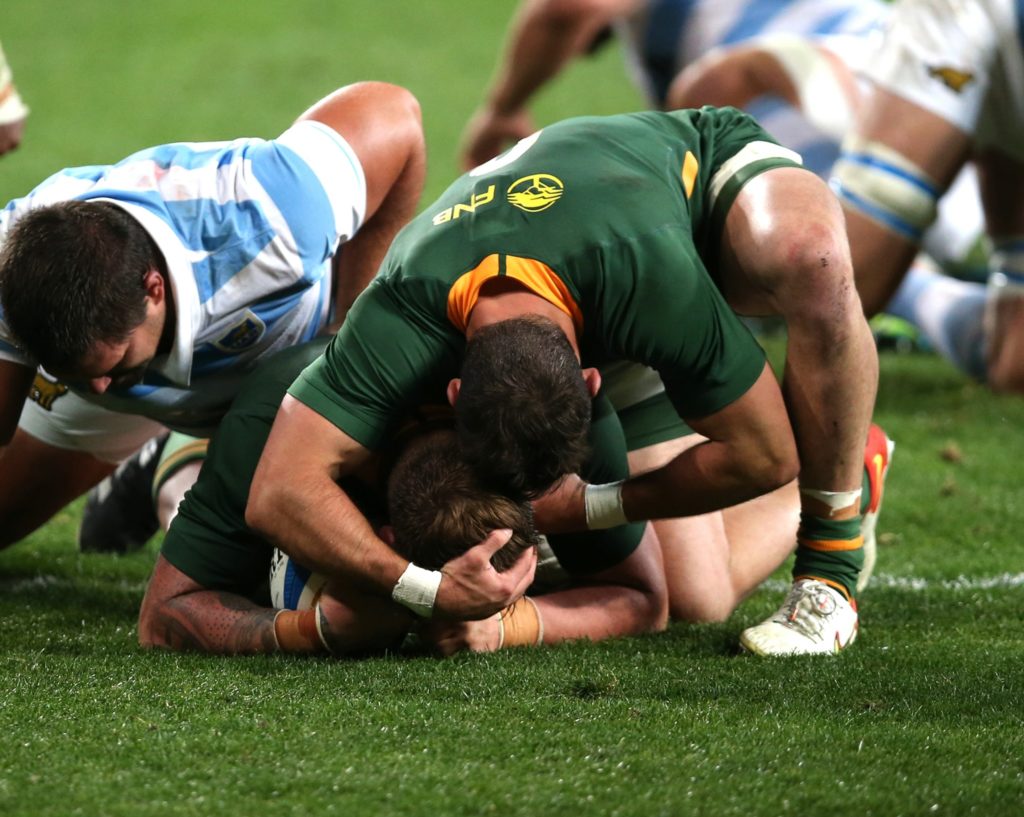 And with the Pumas being pressured into conceding 13 penalties to six in the first half, after going for the touchline with their early penalties the Boks elected to kick for posts after that and go the scoreboard pressure route.

They capitalised on their long periods of camping in Pumas territory with penalties from Pollard in the 11th minute, again a few minutes after that and then a third in the 22nd minute to propel the hosts into a commanding 9-0 lead.

You don’t play catch-up against the Boks, so even though Domingo Miotti did bring three points back for the Pumas, the writing was already on the wall and it was just a matter of time before the Boks opened the gates.

It didn’t happen in terms of tries in the first half, with the Boks continuing the shut-out routine until the break by kicking two further penalties to take a 12 point and 15-3 lead into their halftime meeting.

It could easily have been even more one-sided such was the Bok dominance, with Lood de Jager again magnificent in soaring for the lineout ball and in fielding the kick-offs, Marvin Orie enjoying a good debut when it came to the lineouts in particular, and Malcolm Marx being the chief protagonist when it came to forcing turn-over ball at the breakdown.

Thomas du Toit was the umpteenth tighthead prop the Boks have used so far this winter and he was also the umpteenth No 3 to shine.

The Boks lost starting loosehead Trevor Nyakane early to injury, but Steven Kitshoff replaced him and that isn’t a bad swop.

And with Franco Mostert again making progress in his adjustment to a new role as a blindside flank there was plenty for the Boks to enthuse about at forward.

Scrumhalf Cobus Reinach had two attempted kicks charged down, but Pollard was steady at flyhalf and the established midfield of Damian de Allende and Lukhanyo Am were impregnable on defence and strong in their carries. 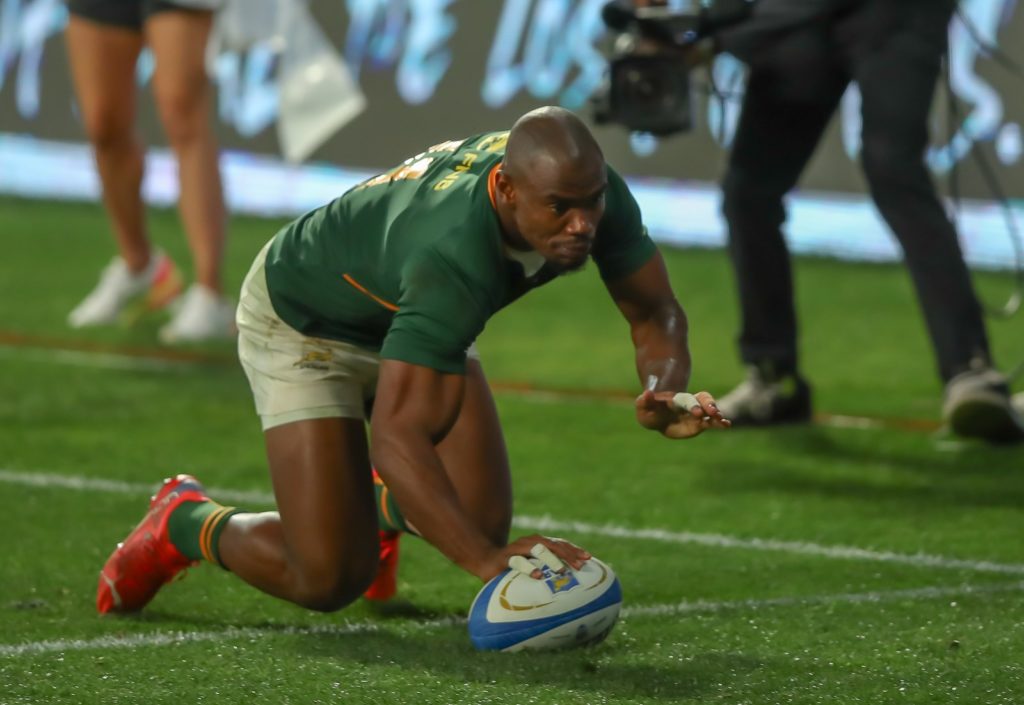 The first Bok try came after they had stretched the play this way and that across the face of the Pumas tryline, with the Pumas eventually simply running out of numbers as Makazole Mapimpi was put in out wide, and then Marx followed up for his well deserved try not long after that.

It coincided with the substitutions for the Boks, and some might argue that was the cue for the scrappy play late in the game, but really it would be churlish to complain too much after yet another emphatic win and at the end of a home sequence that has seen the Boks start their reign as world champions with five wins in six starts and a Lions series victory on top of that.

We will now wait to see when they are next in action, against whom and where. Whoever they face next will know they are up against formidable opponents. 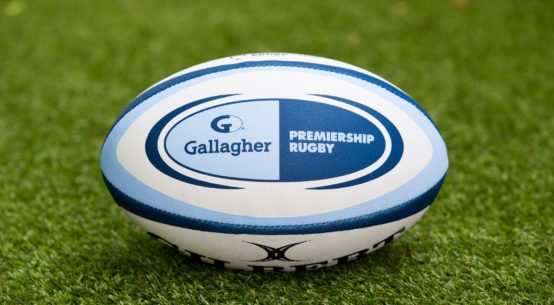