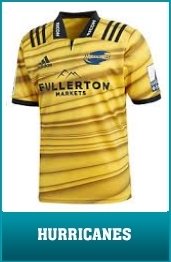 The Hurricanes will be looking to make it five wins in a row at home against the Crusaders when the sides meet in Wellington on Saturday.

The last time the sides met, the Hurricanes won 31-22 at the Westpac in last year’s final match of the regular-season action prior to the play-offs.

The Hurricanes were the only side to beat the Crusaders last season but have started this year poorly, losing to the Bulls in Pretoria.

The ‘Canes scored the most tries in last year’s competition and in Super Rugby history. They racked up 97 crossings, breaking the previous record set by the Lions in 2016 of 81.

This year, however, it is defence which has been their pride and joy, having conceded just 15 points per game this campaign, the fewest of any team.

The Crusaders won 19 of their 20 games last season. At one stage it looked as if they might break their own record for most consecutive wins but after a 14-match winning streak they were defeated by the Hurricanes in Round 17.

Their success was laid on a foundation of uncompromising defence and the best forward pack in the competition. They were dominant at the set-piece, especially at the lineout where they boasted the highest percentage (92.2).

It will be interesting to see how the loss of Richie Mo’unga affects the Crusaders. He was phenomenal last weekend against the Stormers.

Besides that concern, the Crusaders have been playing in an altogether different class and look primed to defend their title.

Matt Todd’s return is a big plus for the defending champions. His experience at the breakdown and lineout are crucial to their cause.

Meanwhile, the battle between the backlines will be intriguing, especially on the wings, with international colours up for grabs as Julian Savea appears to be coming back to his best.

Savea beat seven defenders last round, the equal second most of any player; the last time he made more in a single game was in Round 2, 2017 against the Rebels.

It’s all set up then for a thrilling contest between the two sides as Saturday’s action kicks off with a mouth-watering tussle in New Zealand.

Team news: Beauden Barrett will play his 100th match for the Hurricanes when they host the defending champions. Barrett has played a key role in the success of the Hurricanes in recent seasons and it seems fitting that he will be able to mark the occasion in front of family and friends at Westpac Stadium.

Having made his debut against the Cheetahs in Bloemfontein in 2011, Barrett has gone on to score more than 1000 points in Super Rugby while he has paired with fellow All Black TJ Perenara 81 times in the Hurricanes jersey.

Prop Ben May will bring up a century of appearances in Super Rugby having previously represented the Crusaders and Chiefs. May has also been a regular fixture in the Hurricanes jersey having played 64 Super Rugby matches for the club since making his debut against the Stormers in Cape Town in 2012.

Hurricanes head coach Chris Boyd has named an unchanged starting line-up from the one who defeated the Jaguares 34-9 in the last round.

The only changes are on the bench where two-game All Blacks hooker Asafo Aumua is set to make his Hurricanes debut if called upon. Aumua successfully came through 40 minutes of rugby for the Hurricanes U20 side last week after being sidelined with a rib injury.

There could also be Hurricanes debuts for prop Marcel Renata, who has joined the squad after Alex Fidow was injured against the Jaguares, and halfback Richard Judd who has also joined the squad as injury cover.

In the final change on the bench, Ihaia West returns after he started against the Bulls in South Africa.

Meanwhile, Crusaders head coach Scott Robertson has named his team for the match, which includes two changes to the loose forward trio and one in the backline, from the side that took the field against the Stormers last weekend. Heiden Bedwell-Curtis will start at blindside flanker against the Hurricanes, in place of Pete Samu. Vice captain Matt Todd returns to the openside this week, having recovered from the thumb injury which kept him out of the Stormers match, and Billy Harmon moves to the bench.

In the backs, Mitch Hunt is set to start at fly-half on Saturday after Richie Mo’unga fractured his jaw in the Stormers clash. Mike Delany, who has 47 Super Rugby caps to his name, will provide cover on the bench. The only other change sees hooker Ben Funnell take a spot in the reserves this week.