Jaguares have limited the changes as they look for their first win of Super Rugby 2018, against the Waratahs in Buenos Aires on Saturday.

Santiago Gonzalez Iglesias replaces Bautista Ezcurra at inside centre in the only change to the backline after their defeat to the Hurricanes.

Up front it is the same front-row but lock Tomas Lavanini comes in for Marcos Kremer, who shifts to the the back-row in place of Tomas Lezana. Kremer takes Javier Ortega Desio’s seven jersey as he moves into the number eight spot.

Kurtley Beale and Jake Gordon have been cleared to play the Jaguares this weekend, while Waratahs coach Daryl Gibson has dropped winger Andrew Kellaway in place of Alex Newsome for the match in Buenos Aires.
After appearing in doubt to take his spot in the NSW starting line-up, Beale has shaken off a rib cartilage injury and will start in his regular No.12 spot alongside the team’s chief playmaker Bernard Foley at No.10.

“Kurtley had a fitness test this morning and got through all his contact work so we are confident he will be able to play this game,” Gibson told reporters from Argentina. “He’s taken part in all training this week. This morning was our contact session and he’s completed all that largely without trouble and discomfort, so that’s positive.
“We gave him a real vigorous working over with getting some big guys to run at him.”
The retention of Beale in the starting XV is a major boost for the side, who will be looking to break a seven-game winless streak overseas dating back to July 2016.

In other favourable news for the Waratahs, Gordon, the team’s first-choice halfback, has pulled through as well. He had to undergo return to play protocols and if he did not get the green light, there was the real possibility back-rower Will Miller would have to fill in at halfback at some stage.

“Jake completed our team run today with no contact and then tomorrow he completes his protocol by performing some contact drills,” Gibson said.
The non-selection of Kellaway is an interesting one. The 22-year-old went under the radar in pre-season selection discussion but was backed by Gibson for the first two games of the year against the Stormers and Sharks.

A lack of polish has resulted in him being relegated out of the matchday 23 in place of Newsome, who has been consistent under the high ball and sharp with ball in hand.
“We don’t think Andrew has just quite nailed it in the last two games and it’s a good opportunity for someone such as Alex Newsome and Taqele Naiyaravoro, who is on the bench, to have a go and stake a claim and really try and nail down a wing spot,” Gibson said.

Rookie halfback Nick Duffy, who was flown in from Sydney this week as cover for the injured Mitch Short, is in line to make his Super Rugby debut off the bench.

“He only arrived on Wednesday but he’s pretty familiar with how we play,” Gibson said. “He came in for a week during January to run through all our patterns.”
Meanwhile, the selection of Tolu Latu as the team’s back-up hooker suggests the four-Test Wallaby is fit and firing.

The unlucky man, Hugh Roach, has provided decent impact off the Waratahs bench in both outings this year.
However, Latu, who was called out by Michael Cheika for not being fit enough during last year’s June Tests when he came into camp, has been given a chance to replicate the excellent early season form he showed 12 months ago.

“We believe his inclusion culminates with his conditioning,” Gibson said. “We feel now that he’s ready for Super Rugby.

“It’s particularly tough on Hugh Roach who has performed well on the bench for us but we feel in this game we want the added punch that Tolu can provide in the scrum. We understand the threat the Jaguares pose there.

“He’s also very good around the field. We feel it’s an ideal time for him to show what he’s got.” 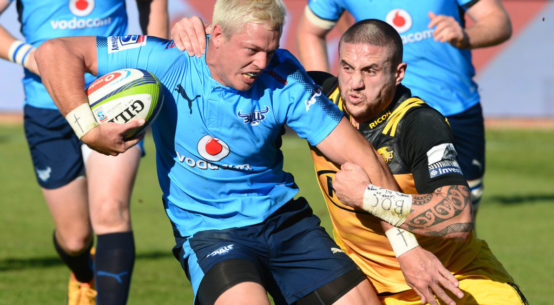