A superb all-round performance ensured a deserved 61-10 victory for the Chiefs as they outclassed the Sunwolves in Tokyo on Saturday.

As the scoreline suggests, the visitors dominated for large periods and eventually outscored the Sunwolves nine tries to two with Damian McKenzie leading the way with a 26-point haul courtesy of two tries and eight conversions.

The win is the Chiefs’ third from four matches this season and moves them joint third in the New Zealand Conference standings with the Highlanders.

The Chiefs made a superb start and were rewarded as early as the fourth minute when Tyler Ardron ran onto a pass from Solomon Alaimalo deep inside the Sunwolves’ 22 before diving over for the opening try.

The two-time champions continued with their attacking approach and were rewarded with well taken tries from All Blacks forward duo Brodie Retallick and Nathan Harris in quick succession.

And midway through the half, the Chiefs secured their try-scoring bonus point when Damian McKenzie launched an attack from inside his 22 which tore the Sunwolves defence to shreds. He was soon inside the home side’s half where he offloaded to Te Toiroa Tahuriorangi, who got a pass out to Alaimalo and he cantered in for an easy five-pointer.

The rest of the half saw an improved performance from the Sunwolves and after being camped in the Chiefs’ half for large periods, they eventually opened their account in the 36th minute when Michael Leitch made a fine break down the right-hand touchline and he did well to offload to Semisi Masirewa, who stepped past Marty McKenzie before dotting down.

That meant the Chiefs led 28-7 at half-time but the Sunwolves made the brighter start to the second half and narrowed the gap two minutes after the restart thanks to a brilliant try from Hosea Saumaki.

This, after he gathered the ball close to his 10-metre line and set off on a superb run in which he first shrugged off an attempted tackle from Harris with a powerful hand-off, before beating Damian McKenzie with deft footwork on his way to the try-line.

The visitors did not take long to respond, however, and three minutes later the ball went through several pairs of hands inside the Sunwolves’ half before Damian McKenzie crossed the whitewash.

And in the 53rd minute, Alaimalo scored his second try after Ardron laid the groundwork with a superb run in the build-up.

The Chiefs continued to dominate as the half progressed and in the 65th minute Tahuriorangi launched a well-placed box kick behind the Sunwolves defence which Damian McKenzie gathered before racing away for his second try.

The men from Hamilton finished stronger and two further tries from Liam Polwart and Sean Wainui in the game’s closing stages sealed an emphatic win. 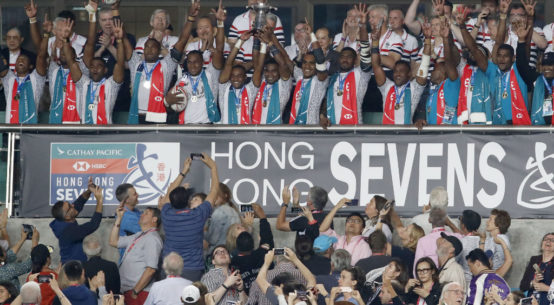