It’s must-win for the Brumbies when they host the Jaguares on Sunday, with the Melbourne Rebels and Waratahs keeping them at arm’s length.

Before the round began Dan McKeller’s outfit were seven points behind the Rebels and 10 adrift of the ‘Tahs in the Australian Conference.

The Jaguares, meanwhile, are already playing for pride after a poor start to the season, but their mood will have improved after last week’s victory at the Rebels. They seem to relish being on the road and have won three of their last five away games, all of those in Australia.

Subsequently the visitors will fancy their chances of making it back-to-back wins, a feat neither side has managed thus far this campaign.

The visitors’ set-piece still requires much improvement though as they have the lowest scrum success rate (80%) in the competition in 2018 and the second-lowest line-out success rate (79%). If that isn’t rectified from now until the end of the season, they will stay near the basement.

Off said set-piece, the Brumbies have laid a real platform for one player in particular, with Isi Naisarani proving a carrying threat. The number eight has been a frequent scorer this year and will be crucial to the Brumbies in their back-row battle against this Jaguares’ pack.

The hosts will need to shake off their recent hiding at the Highlanders, however, if they are to come away victorious and, with the Jaguares in good spirits on tour, expect this one to be a close game that could go either way.

The last time these teams met: The Brumbies won the only previous meeting between the sides, running out 39-15 victors in Buenos Aires in 2017. Tries came from Sam Carter, Tom Banks (2), Henry Speight and Andy Muirhead (2) while Wharenui Hawera kicked nine points. In reply it was locks Tomás Lavanini and Guido Petti who crossed for the Jaguares while Santiago González Iglesias and Nicolás Sánchez kicked points.

Team news: Wallaby wing Henry Speight returns to the run-on side and is one of four changes to the starting XV made by head coach Dan McKellar.

There’s a return in the second-row for experienced lock Sam Carter, who will captain the side in the absence of co-skipper Christian Lealiifano, with the centre taking a planned break from Super Rugby to undertake a period of regeneration following a heavy workload in pre-season and taking part in every match thus far.

Scrum-half Joe Powell returns to the starting XV after an absence of two matches, swapping places with Matt Lucas who reverts to the replacements bench, whilst there is a recall for Kyle Godwin who will slot into the inside centre role vacated by Lealiifano.

There are three changes amongst the replacements with Mees Erasmus and Darcy Swain set to win their first Brumbies caps as replacement prop and lock respectively, both drafted back into the matchday 23.

Meanwhile, Jaguares head coach Mario Ledesma has made three changes in personnel to his starting XV.

Experienced full-back Joaquin Tuculet comes back into the side and replaces Sebastian Cancelliere, with Emiliano Boffelli moving to wing.

Elsewhere in the backs Gonzalo Bertranou also returns to the XV at scrum-half, swapping places with Martin Landajo who moves to the bench.

There is just one change to the pack as Agustin Creevy comes back into the side for Julian Montoya, who is also amongst the replacements. 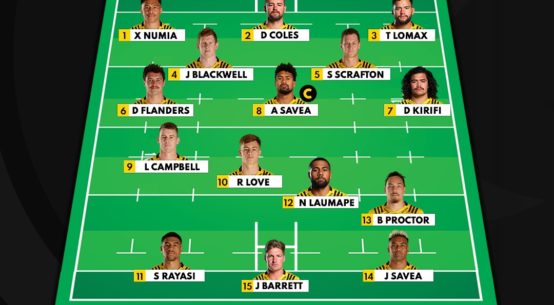