The Sunwolves will be hoping to claim their first Super Rugby victory of the season when they take on the Blues in Tokyo on Saturday.

After eight rounds of matches, Jamie Joseph’s charges are firmly rooted at the bottom of the overall standings as they have lost all six of their matches. The Blues, however, have fared little better as they only have one win under their belt from the same number of games played.

But despite their poor start to the season, the Sunwolves will be quietly confident ahead of this encounter as they secured a deserved 48-21 win over the Blues in the corresponding fixture in Tokyo last year – the only other match between these sides.

That victory was one of the Sunwolves’ three previous home games against New Zealand opposition, though they have lost the other two by margins of greater than 50 points.

The Blues are in the midst of a slump as they have lost their last three games in a row, the last time they lost more in succession was a nine-game drought across the 2014 and 2015 campaigns.

The men from Auckland are desperate for victory as they are currently at the bottom of the New Zealand Conference table with just seven points notched from their six games and they are seven points adrift of their closest rivals in that conference, the Highlanders, although the Dunedin-based outfit have played one fewer match so far.

The Sunwolves have conceded just seven penalties per game this season, fewer than any other team in the competition and will need to continue that good discipline and hope their attack fires if they are to prevail.

The last time these teams met: The Sunwolves stunned their more fancied opponents when they claimed a 48-21 victory in Tokyo in Round 17 last season. The Blues led 21-14 at half-time but lost their way after the break as the Sunwolves took control of proceedings. Timothy Lafaele led the way for the Sunwolves by scoring a hat-trick of tries and their other five-pointers were scored by Keisuke Uchida, Ryohei Yamanaka, Kaito Shigeno, Yoshitaka Tokunaga and they were also awarded a penalty try. Their other points came via conversions from Yu Tamura and Jumpei Ogura. For the Blues, James Parsons, Gerard Cowley-Tuioti and Michael Collins scored tries and Ihaia West added three penalties.

Team news: Sunwolves head coach Jamie Joseph has made just one change to his starting line-up for this fixture. Despite suffering a 50-29 defeat to the Waratahs last weekend, Joseph has kept changes to a minimum with his only alteration made in the second-row where Grant Hattingh comes in for Sam Wykes.

Scrum-half Yutaka Nagare captains the side and he will form a half-back partnership with Yu Tamura while Timothy Lafaele and Michael Little will continue as the midfield combination.

Kotaro Matsushima starts at full-back again and he is joined in the back three by wings Lomano Lemeki and Semisi Masirewa. In the forwards, Hattingh and James Moore are the starting locks while Shota Horie packs down at hooker alongside Jiwon Koo and Craig Millar, who are the starting props.

In the back-row, Kazuki Himeno continues at number eight while Lappies Labuschagne and Yoshitaka Tokunaga are the two flankers. There are three changes on the replacements bench with Willie Britz coming in for Ed Quirk as the replacement loose forward while William Tupou takes over from Hosea Saumaki as backline cover and Shintaro Ishihara is preferred to Keita Inagaki as the back-up prop.

All Black Patrick Tuipulotu will play his 50th Super Rugby game for the Blues this weekend. Tuipulotu, who made his debut in 2014, has played in all six games for the Blues this season. The added toll to the injury list, with Jerome Kaino (hamstring) and George Moala (chest) out after injuries in last week’s game against the Chiefs, has forced some changes.

It will see the debuts for New Zealand U20s representative Orbyn Leger, who will play alongside Rieko Ioane in the midfield. Big Northland wing Jordan Hyland gets his start on the right wing, after some impressive performances in the Blues Development team, which means that All Black Matt Duffie moves to the left wing. The Blues have also brought in young Auckland lock Ben Neenee to the reserves, after also playing well for the Blues Development. 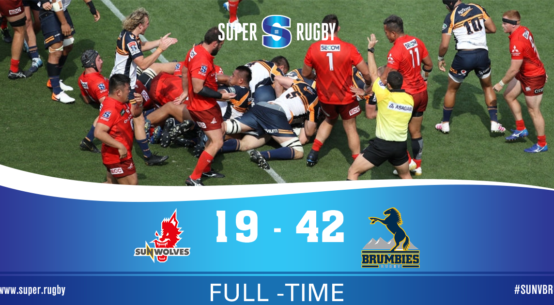