Defending champions the Crusaders progressed to the Super Rugby final as they beat an out-of-sorts Hurricanes side 30-12 in Christchurch.

It was a comfortable win in the end for the competition’s form side, as they made it 14 wins in a row on Saturday to secure a home final.

Julian Savea and Ben Lam crossed for the Hurricanes but they were second best as their season draws to a close, with several players and also head coach Chris Boyd now moving on to pastures new.

The confident Crusaders were the dominant side in the first-half as they went in 18-7 to the good, thanks to Mo’unga’s and Bridge’s scores.

Jordie Barrett did have a long-range attempt to give the Hurricanes the lead on two minutes but was wide and from that point on the away side were under pressure. Missed tackles and not finding touch didn’t help the ‘Canes and eventually Mo’unga slipped through to cross.

7-0 became 7-7 on 16 minutes though as a Mo’unga spillage allowed the Hurricanes a chance to strike back, which they did superbly as they worked the ball right to where Savea reached out for the corner, despite Ryan Crotty’s best efforts to bundle the wing into touch. Beauden Barrett’s excellent conversion levelled matters with the Crusaders having that crossing compounded by Jordan Taufua coming off injured.

The hosts soon recaptured their form, however, and were back in the Hurricanes’ 22 on 27 minutes, with forward carries off a line-out being followed up by Bryn Hall spotting Bridge on the blindside wing, who finished well. Mo’unga missed the conversion which meant it was 12-7.

The Crusaders were now flexing their muscles and with Mo’unga always a threat with ball in hand, they built on their lead before the half-time interval. First, a scrum penalty made it 15-7 and with three minutes to play, an offside after a Mo’unga break extended the gap to 11.

The Hurricanes would only have themselves to blame as they fell further behind on 43 minutes, with errors from Nehe Milner-Skudder costing them. Jack Goodhue’s break down the right wing led to quickly recycled ball and Hall found Havili hitting a great line which made it 25-7.

Territory was very much with the Crusaders leading up to the hour mark but crucially the Hurricanes avoided leaking another score as they weathered the storm. However, they would struggle to penetrate a formidable Crusaders defence that repelled them from their own red zone.

That ultimately came back to haunt them and as is the Crusaders’ wont they took their chance when it came. Mo’unga was again involved as his cross-kick after a Matt Todd carry found replacement Ennor, who made it 30-7. The missed conversion was star man Mo’unga’s last act.

Beauden Barrett, who was outclassed by his opposite number in Christchurch, then came close to crossing but was short of the line. And despite Lam racing over at the death, the Hurricanes’ season ended with a whimper. The Crusaders meanwhile march on as they are now one match away from a ninth title. 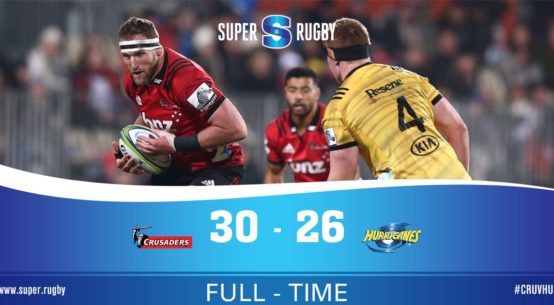