The Crusaders secured their ninth Super Rugby title following a dominant 37-18 triumph over the Lions at a sold out AMI Stadium in Christchurch.

Despite a positive start from the South Africans, which yielded a three-pointer for Elton Jantjies, the hosts soon asserted their authority and scored 20 unanswered points. Seta Tamanivalu and David Havili both touched down while Richie Mo’unga added two conversions and penalties for a 17-point buffer.

Jantjies responded from the tee just shy of the interval but Mo’unga’s third penalty kept his side in control at the start of the second half.

Cyle Brink and Mitchell Drummond then traded tries but the Lions refused to cede and Malcolm Marx crossed the whitewash. However, the Crusaders were ultimately too good and Scott Barrett made the game safe by going over from close range.

It sealed their second championship under the guidance of Scott Robertson, whose team overwhelmed a side that only showed glimpses of their capabilities.

Robertson may have been concerned early on, though, as Swys de Bruin’s men controlled possession, looked to test the fringes of the hosts’ defence and eventually broke the usually stout rearguard when Ruan Combrinck surged clear.

It was a brilliant piece of individual of skill from the wing, who weaved his way to within five metres of the line, but they failed to take advantage of Combrinck’s excellence.

Robertson’s charges remained resilient in the face of consistent pressure, until they conceded a penalty at the breakdown, and Jantjies deservedly kicked the visitors into a 3-0 lead.

The Crusaders barely had the ball in the initial stages of the contest but, when they did get some territory, the New Zealanders began to make incursions. The Lions duly infringed and Mo’unga was on target from in front of the posts as the defending champions levelled matters.

Momentum was now with the Christchurch-based outfit and the away side were unable to cope with their pace and power when Tamanivalu barrelled his way past Combrinck to touch down.

Although the South Africans attempted to hit back via their usually trusty maul, a tactic which has served them well throughout the campaign, that threat was convincingly negated by their opponents.

Starved of front foot ball, the Lions began to make mistakes and two such errors from Jantjies led to the Crusaders increasing their buffer. Firstly, Mo’unga kicked a penalty after the fly-half had conceded a five-metre scrum before the pivot’s up and under was collected by his opposite number, who broke clear. The recently capped All Black was eventually taken down but the ball was shifted to Havili and the full-back crossed the whitewash.

Jantjies’ then scored a three-pointer to provide the Johannesburg outfit with a glimmer of hope before Mo’unga’s effort off the tee early in the second period re-established their 17-point lead.

De Bruin’s men were being outplayed and were struggling in the set-piece against the Crusaders’ international front five, but Brink, who had otherwise been quiet, produced a moment of inspiration to reduce the arrears.

For the first time in the contest the New Zealanders would have been disappointed by their defence, but the flanker showed immense power to charge across the gain line and scamper over.

That try gave the South Africans a lift and the hosts made a couple of surprising errors, but their experienced players simply stepped up and Robertson’s team duly scored the decisive try. It was brilliantly worked, with the forwards showing deft hands in contact, and Drummond was the beneficiary of his team-mates’ ability to alter the point of contact.

In a topsy-turvy second half, Ryan Crotty was sin-binned and Marx touched down for the Lions before Barrett crossed the whitewash to rubberstamp yet another title for the most successful franchise in the competition. 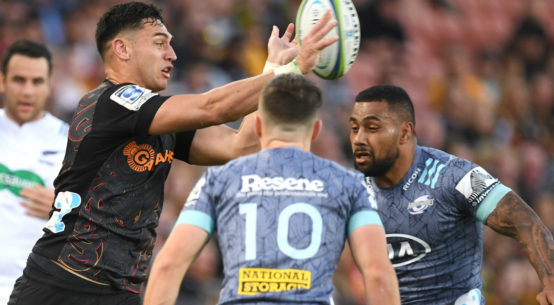