Will Jordan and Codie Taylor both scored twice as Scott Robertson’s men racked up nine tries in the rout over a hapless Chiefs.

The game was over before halftime. It was, in fact, over before the half-hour when Richie Mo’unga’s third conversion made gave his team a 19-point advantage.

It was looking grim when Michael Alaalatoa, who scored soon after the break, Taylor (twice) and Bryn Hall stretched the score to 57-14 with 11 minutes remaining.

Etene Nanai-Seturo dotted down for his team’s second try after some sustained pressure inside the Crusaders’ 22.

But the Chiefs found some mojo, scoring two well-worked tries through Jack Debreczeni and Mitchell Brown to save – some – face.

First-half blitz
The Crusaders started hot. Their handling was sublime and their support play un-matched.

Ryan Crotty and Jack Goodhue wreaked havoc in the midfield, setting four tires with wonderful offloading and an eye for a gap.

The Saders’ forwards dominated the breakdown, while the Chiefs were wasteful in possession, the little that they had but reckless non-the-less.

Damian McKenzie endured a torrid afternoon. He was thrown like a rag-doll by Sevu Reece in the build-up to Jordan’s first; he cost his side with some terrible kicking and a wayward pass for Reece’s try.

Jordan bagged a first-half brace as the Crusaders ran in five tries in the opening 40 minutes to set the defending champions on their way to a record win over the Chiefs.

Braydon Ennor opened the scoring in the 10th minute before Reece intercepted McKenzie’s pass inside the Chiefs’ 22.

Andrew Makalio crashed over from close range either side of Jordan’s double. Taleni Seu scored the only try for the visitors before the break.

It was the only time that the visitors put their hosts under pressure.

Seu used all his power as he burst through two tackles and carried two more defenders over the whitewash with him for the score.

This was always going to be tough for a disjointed Chiefs team
They had lost their previous four matches on the bounce and their last four games against the Crusaders.

The 2017 and 2018 champs enjoyed up to 70 per cent possession and territory during the match as Colin Cooper’s side struggled to get their hands on the ball.

When they did, they kicked aimlessly to the Crusaders dangerous back three, lost the ball in contact or through wayward passing.

Michael Alaalatoa scored from close range, soon after the interval. Etene Nanai-Seturo cancelled out the tighthead’s try with a neat finish in the corner to give his side some early second-half points.

Sensational finishing as Crusaders upped the tempo
Waikato could not stop the bleeding. David Havili and Taylor combined after an outrageous no-look out-the-back door pass to the hooker, who raced away to score. Havili’s no-look offload was sensational, drawing two tacklers and giving Taylor space away down the sideline.

It was soon a record score after an 80-metre counter-attack from the home team’s 22.

Taylor was involved with Reece on the sideline before the winger sent Hall away for his first try of the campaign. The replacement hooker flopped over for his second from a powerful lineout drive; however, the Chiefs found some heart. Cooper’s side did not give up and when they managed to put together some phases, they looked dangerous. In the closing stages, the Waikato men scored twice in quick succession in the final eight minutes. Debreczeni and Brown both crossed to save their franchise from a record margin defeat, but it is scant consolation after another mauling and the fifth loss in a row.

Robertson’s men are now on a 22-match home winning streak and have won their last nine New Zealand derbies. 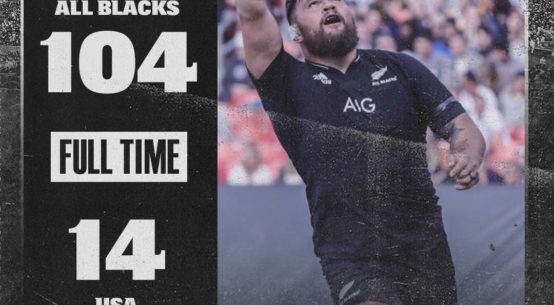