A second-half revival has helped the Reds to a crucial 24-12 win over the Stormers in a perfect fillip ahead of their South African tour.

After an error-riddled opening term led to the first scoreless half in Super Rugby in six years, the Reds bounced back to score three tries in the second term, including two in the opening 10 minutes while Stormers captain Siya Kolisi was in the sin bin.

While the Stormers bounced back to pose a threat, Reds scrumhalf Tate McDermott ensured the win when he darted over from 7m out after a penalty in the 66th minute, his decision showing his continuing evolution after sealing the no.9 jersey from Moses Sorovi.

Sorovi made a similarly big play five minutes later after coming on as a replacement when he rolled Kolisi over the tryline, just as the Stormers captain looked set to score and give his side a chance with 10 minutes remaining.

The Stormers did make it interesting when Damian de Allende scored in the 74th minute but when SP Marais missed the conversion from almost directly in front their night was over, with Bryce Hegarty sealing the victory with a 78th-minute penalty.

The Stormers made ground seemingly at will in the early stages and the Reds were lucky not to be two tries down inside the opening 20 minutes after both Damian Willemse and Sergeal Petersen had efforts disallowed.

Fullback Willemse only just failed to ground the ball before the dead-ball line and the Stormers were denied again just three minutes later, with Sergeal Petersen’s right foot just brushing the line as Reds fullback Hamish Stewart made a desperate attempt to force him into touch despite being beaten.

The Reds had their chances but their failure to hold on to the ball meant they were unable to capitalise on the territorial gains they finally started to make.

The most costly stat proved to be captain Siya Kolisi’s sin binning just before the break though.

The South Africans were also involved in the last scoreless Super Rugby half, in round three, 2013 against the Sharks in Durban.

But that wouldn’t extend into the second half at Suncorp Stadium.

The Reds scored twice while Solisi was off the field, Samu Kerevi scoring just 90 seconds after the break following a  neat outside-inside passing exchange with Sefa Naivalu.

And while Stewart seemed to have butchered a try when he did not pass to an unmarked Jack Hardy on his outside just minutes later, the Reds maintained possession and Brandon Paenga-Amosa rolled over the line to continue his try-scoring run.

But the inconsistency that has plagued the Reds’ season featured again just minutes later, with flimsy tryline defence allowing Kobus van Dyk to crash over from close range to get the Stormers on the board.

A wrist injury to Filipo Daugunu inside the opening 15 minutes had forced a backline reshuffle from the Reds, with Duncan Paia’aua coming on at inside centre and Samu Kerevi and Sefa Naivalu shifting wide, bringing an early end to the monster midfield the Reds had taken into the match.

Kerevi made metres at will but was guilty of pushing the pass at times, with the Reds wasting plenty of opportunities with the game still in the balance.

Scrumhalf McDermott made the most of his chance though, deciding to tap and go after a penalty and burrowing over from 7m out.

Replacement half Moses Sorovi made a similarly big play five minutes later when he rolled Kolisi over the tryline, just as the Stormers captain looked set to score and give his side a chance with 10 minutes remaining.

The Stormers did make it interesting when Damian de Allende scored in the 74th minute but when SP Marais missed the conversion from almost directly in front their night was over.

Bryce Hegarty sealed the 24-12 win with a 78th-minute penalty. 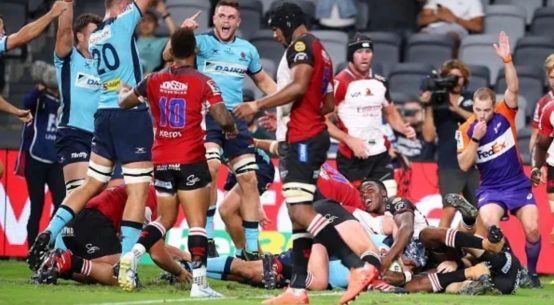 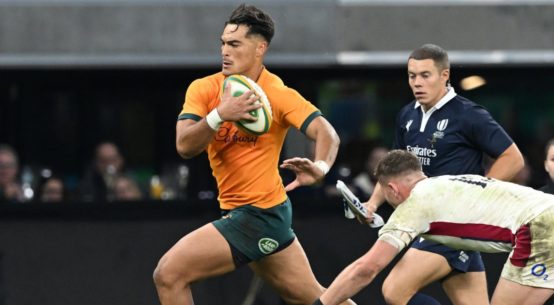