THE MELBOURNE REBELS BEAT THE WARATAHS 24-10 IN A HARD-FOUGHT AUSTRALIAN DERBY AT A SODDEN AAMI PARK, MELBOURNE.

MARIKA KOROIBETE AND ANDREW KELLAWAY’S BRACE, IN THE MELBOURNE RAIN, SETTLED THIS AUSSIE DERBY FOR THE REBELS.

The superb Matt Toomua kicked three penalties to keep his team ahead in what was a close contest for 70 minutes.

The win is only the Rebels‘ third in 18 Super Rugby match against the Waratahs.

The Waratahs, who fought back to stay in the contest before falling away, but the 14-point defeat flattered the visitors.

They could only muster a try through Harry Johnson-Holmes, late in the second half, and five points from the boot of stand-off Will Harrison.

Kellaway scored in the 74th-minute after Toomua had made it 14-10, which killed the game.

The 24-year-old winger’s last-minute score, however, was the icing on the cake for the Melbourne franchise, and the former ‘Tah.

How he must have enjoyed this night for his new club.

David Wessels’ side, almost 10 years to the day since their first Super Rugby match against New South Wales, ended a six-game losing streak against the Sydney side in commanding fashion.

The defeat is the third on the trot to open the 2020 Super Rugby season for the beleaguered Waratahs.

Head Coach Rob Penney has lots of work to do after defeats to the Blues and Crusaders sees his side sit bottom of the Australian Conference with zero wins.

REBELS DOMINATE THE GAME DESPITE THE SLENDER FIRST-HALF LEAD

The game was played in torrential rain for the most parts making handling the wet ball tricky.

Ryan Louwrens, playing the wet-weather conditions perfectly, and Billy Meakes both had tries chalked off after TMO reviews as the Rebels pounded the Waratahs try-line.

The Rebels spent much of the first-half camped inside the opposition’s 22, forcing them into mistakes with accurate kicking.

Beale was crunched by Meakes and had to dot down under the sticks. It happened once in each half to the Wallaby utility back.

He wasn’t the only player to be tackled in his in-goal; the Waratahs made a mess of the bouncing ball.

Williams should have given another penalty to the hosts when their pack bulldozed NSW.

But for some bizarre reason, the ref allowed play to continue, and a scoring opportunity was lost.

Meakes had a try chalked off because of obstruction, two minutes before halftime, but the TMO referral gave Penney’s men a respite.

AFTER DEFENDING FOR MUCH OF THE FIRST HALF, THE ‘TAHS’ STRUCK A BLOW EARLY IN THE SECOND STANZA

New South Wales went close through Jake Gordon before notching their only try of the evening.

Harrison’s conversion gave the visitors a two-point advantage, but the lead did not last long.

David Wessels side hit back with a second Toomua penalty after the lock’s mistake put the hosts 11-10 in front.

The weather was causing problems with the handling as both teams struggled to hold on to the ball.

Melbourne’s halfbacks impressed in the deluge, their kicking was accurate, relieving pressure off their team while transferring it on to their opponents.

The Waratahs struggled with the slippery ball throughout the night.

Territory was the name of the game with both sides kicking away possession in the hope of mistakes by the opposition.

It made for a dull affair at times.

The two teams did try play; however, the ball was either thrown to the opposition or knocked on.

MELBOURNE FINISH STRONG AS WARATAHS WILT IN THE RAIN

Isi Naisarani’s mini-break from his half, set-up the phase of attacks that led to the home team scoring eight points in quick succession.

Toomua extended the advantage with a 70th-minute penalty before Andrew Kellaway settled the derby.

Michael Wells won the opposition’s lineout, setting up the counter-attack inside the visitor’s 22.

Dane Haylett-Petty drew his man before putting the former Waratah away in the corner.

It put Wessels’ side two scores up, an insurmountable challenge for the bereft ‘Tahs.

The visitors did not even lay a glove on the Rebels from here on out; instead, they crumbled, wilting the rain as the dark blue tide swept over them.

Kellaway added the finishing touch with his second score in the same corner, as the hooter sounded, driving a dagger into the opposition. 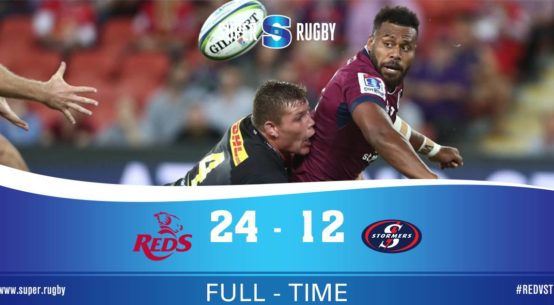