Bolstered by returning players, the Highlanders are looking to deny the Hurricanes when they meet in Sky Super Rugby Aotearoa in Dunedin on Friday.

The Highlanders are welcoming a greater depth of player resource to choose from.

Lock Pari Pari Parkinson is back in the frame after having undergone an ankle reconstruction. Prop Ayden Johnstone returns having completed concussion protocols, while Japanese signing Kazuki Himeno may make his first appearance among the side’s loose forwards.

However, there was still no word whether the former All Black flanker Liam Squire would be fit to play after hip and knee surgeries.

Wing Jona Nareki, who suffered a hip injury against the Blues, is expected to be available.

With the bye week to reflect on their outing in Auckland, the feeling was the Highlanders hadn’t got into their game plan as much as they wanted, and the Blues had been able to dominate by getting into their set-piece game.

While the concentration on forward play and rolling mauls had its detractors, Dermody wasn’t one of them.

“It’s a great part of the game for me, it’s what makes rugby [the game it is].

“There is a heap of technique involved, and as a coach, we try and highlight that. It is not always the biggest guy winning.

“I reckon that is great for any team to can stop each other. It is us being technically better and there being a bit more intent in those moments,” he said.

The Hurricanes would be heading south seeking their first win of the season after a disappointing start.

“We’re prepared for anything, they’re a team that’s hurting, and they’re a dangerous team. You saw how quickly they scored points in that first half against the Chiefs, and that’s what we’re expecting, so our challenge is to not give them that space.

“The nature of this competition is that anyone can beat anyone. Unfortunately, for them, they have been on the other side of those first three games,” he said.

While they were capable of unleashing devastating attacks, they had also failed to seal off leads to go on to victories.

“We know the attacking threats they have got, they starting their set-piece a little more against the Chiefs. So we know they are a threatening team. If we allow them space and time, they can punish you pretty quickly,” he said.

Parkinson would add plenty to the side when returning to action.

“He just adds a different element to our forward pack. He is obviously a big human. We will be taking it easier with him because of how long he has had off,” he said.

All Blacks and Highlanders halfback Aaron Smith’s notable career has seen him ranked among the great contributors to New Zealand’s game and he has been a player whose influence has been so significant both sides built a style of play around him.
A Rugby World Cup winner in 2015 and a bronze medalist in 2019, Friday’s Sky Super Rugby Aotearoa game against the Hurricanes in Dunedin will give him another milestone when he becomes his side’s most capped player.

He will play his 154th game, one more than Ben Smith achieved. And the opponent will be from his home region and who the Highlanders beat to win their only Super Rugby title in 2015.

Smith, whose speed, not only of delivery of the ball but also around the field marked his game and was of such value to both the Highlanders and All Blacks, said the prospect of heading Ben Smith’s record had been on his mind over the past 12 months.

“It’s been fuelling me, and now it’s kind of here, and my body has given me that chance. There’s a good sense of gratitude around all the hard work. You start to remember coaches, teammates you’ve played with and good memories.

“In the times we’re living in, it’s a really special time for me and my family and I’m real grateful,” he said.

Reflecting on their loss to the Blues in their last outing, Smith said it was disappointing that the Highlanders had given the Blues so much.

It had been nothing like how the Highlanders wanted to play, but with a bye week to think about things, they had returned to action refreshed and looking forward to their next month of rugby, starting with playing a desperate Hurricanes side.

While long-time rival, and All Blacks teammate, TJ Perenara wouldn’t be playing, Smith said that it wasn’t so much that Perenara’s playing influence was missing but, like all halfbacks, they were dependent on the quality of ball they received from their forwards.

What was missing was the leadership, mana and swagger Perenara brought to help the side’s confidence.

The Hurricanes game with the Chiefs had been an old-fashioned derby, and the outcome of those game tended to come down to what happened in the last 10 minutes. 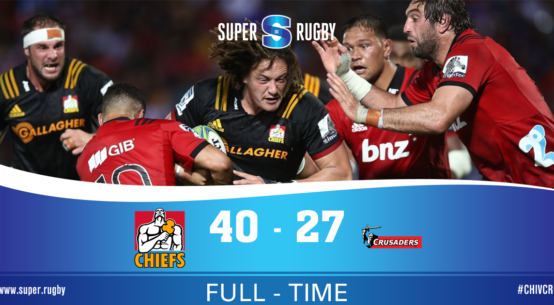