Compelling leadership displays by halfback Aaron Smith, and his loose forward combination, helped the Highlanders to a 35–29 Sky Super Rugby Aotearoa win over the Blues in Dunedin on Friday.

Smith was everywhere, upsetting the Blues at every chance and leading a strong defensive effort that nullified the attacking sorties mounted by the visitors.

Backing him all the way were Japanese No8 Kazuki Himeno and flankers Shannon Frizell and Billy Harmon. Himeno was ever-present over the ball while Frizell was a powerhouse, carrying the ball, tackling and making breaks. Harmon was also constant at the breakdown and in running support.

Their efforts complemented the kicking game orchestrated by first five-eighths Mitch Hunt that constantly turned the Blues around and caused them all manner of problems.

If it was a display of rugby intelligence for the Highlanders, who can say after their win over the Crusaders, they have beaten the first and second-placed sides in the competition, it was an ill-disciplined effort by the Blues who paid dearly.

The worst example was in the 72nd minute when replacement prop Alex Hodgman was sent off for a shoulder charge on Highlanders’ replacement flanker James Lentjes. But it was the culmination of an evening of unnecessary penalty concession by the Blues.

The game didn’t have the best start for Smith.

A superbly-timed piece of opportunism by Blues halfback Jonathan Ruru resulted in the game’s first try after five minutes. From a goal-line ruck, Smith attempted a long, flat pass along the line. However, he had the rare sight of seeing his pass picked off by Ruru in a brilliant intercept. All he had to do was fall to the ground to score.

But the Blues had to do without skipper and blindside flanker Tom Robinson who suffered a head blow and was forced from the game.

The Highlanders had promised to run the Blues pack around, but rather than passing the ball willy-nilly, they resorted to putting kicks in behind the line to turn them around. The result was indiscipline creeping into the Blues’ play, and by the 30th minute, they had conceded seven penalties to one from the Highlanders.

More importantly, the Highlanders scored their first try 14 minutes into the game after a 10-phase build-up which ended with another penalty conceded by the Blues. Only five metres from the line, Smith took the quick tap, ran at the line, and from the goal line ruck No8 Kazuki Himeno went over for the try.

In the 22nd minute, another ruck five metres from the Blues line looked to have lost a chance when lock Josh Dickson dropped the ball. However, a look by the TMO revealed foul play when No8 Hoskins Sotutu kicked at the ball from within the ruck as Dickson picked it up. He was sin-binned for his efforts, and from the resulting scrum, fullback Josh Ioane was able to cross for the try.

Once Sotutu had served his time, the Blues upped the tempo, ironically through their two locks Gerard Cowley-Tuioti and Sam Darry, who were off-loading ball like veterans. They pushed play into the Highlanders’ 22m, and when the defenders infringed at a ruck, the Blues took advantage as Ruru dashed ahead to set up a goalmouth ruck.

When the ball was released, first five-eighths Otere Black found the gap and fed centre Rieko Ioane in for the try.

Just when it seemed the Blues had settled their penalty issues, they conceded one which allowed the Highlanders to kick into the Blues 22m. From the lineout, yet another lineout variation was unleashed as Smith ran wide from the base, and then flicked a pass back to blindside wing Ngatungane Punivai, who ran in for an injury-time try.

The third quarter ebbed and flowed with the Highlanders finally making the breakthrough. Smith trapped Sotutu at a Blues scrum out from the line to turn the ball over, and in the wake of that, a long ball from first five-eighths Mitch Hunt found wing Jona Nareki unmarked out on the sideline to score.

The Blues cause was not helped when conceding another penalty infringing as the Highlanders kicked the ball through.

But the Blues came back when unleashing their forward power to pummel the Highlanders defence before replacement prop Nepo Laulala drove over to get the score back to 24-30.

In the wake of Hodgman’s dismissal, the Highlanders sealed the game when replacement fullback Michael Collins completed some fine build-up work to score.

The Blues did score one last try in the final minute to Sotutu but they ran out of time on a night where the inspiration was all with the Highlanders in claiming their first home win of the season.

The win lifts the Highlanders to third on the table on 14 points, although they have played one game more than the second-placed Blues on 15 points. 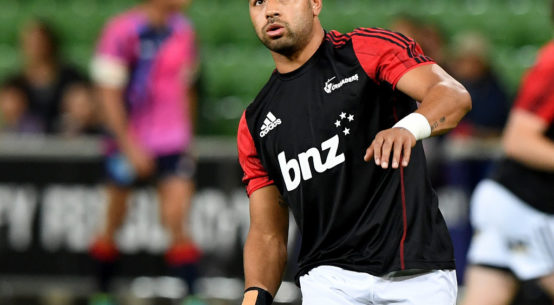