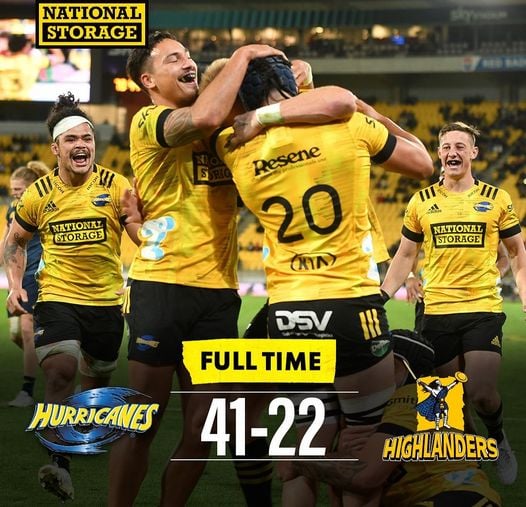 The Hurricanes have blown home with a wet sail in the capital to record their second victory in Sky Super Rugby Aotearoa over the Highlanders.

The 41-22, six tries to three, scoreline, looks clearcut, but the home side only pulled clear at the 70-minute mark with two late tries. Jason Holland’s charges will still finish at the foot of the table, with a 2-6 record, while the Highlanders will remain in fourth, as they were in 2020.

Ngani Laumape gave a powerful display at second five for the Hurricanes, advancing his All Blacks credentials with a try, several telling bursts and some useful tactical kicking for good measure.

He was aided and abetted by hooker Dane Coles, at his feisty best, despite a yellow card (Mitch Hunt also copped one in the same incident) and nailing the 23rd try of his long Super Rugby career, and opensider Du’Plessis Kirifi, strong over the ball and prominent in the loose.

There were also big outings from No 8 Devan Flanders and left wing Salesi Rayasi, looking much more comfortable at this level after conquering the 2020 Mitre 10 Cup. Both scored fine tries.

The Highlanders actually led 17-15 at the break. They were more accurate in the opening stanza, where veteran lock Bryn Evans and No 8 Kazuki Himeno were prominent. Josh Dickson and Jona Nareki crossed for tries, while Nehe Milner-Skudder, in his first Super Rugby match in three years, showed some nice touches at the back.

But the Hurricanes’ razzle dazzle paid dividends when it counted and they will know they had the Highlanders’ number in 2021.

Both sides will now enjoy a fortnight off to reset before they kick off their Super Rugby Trans-Tasman campaigns.