Skip to content
You are here
Home > Uncategorized > Blues end pre-season unbeaten, Weepu off the pace

Blues make it three from three with win

Photosport
TRY: Dan Prior of the Blues dives over for a try in the Blues pre-season win over the Highlanders.

The Blues have ended their preseason programme with their third straight win after beating the Highlanders 29-12 at Unitec in Auckland today.

The result means the Highlanders have lost all three of their preseason games.

Although the Highlanders got the scoring underway with a breakaway try to Kurt Baker early in the game, the Blues hit back with tries to Alby Mathewson and David Raikuna later in the half.

A storm hit the ground before the interval and lasted into the second half before the weather changed into a hot and humid afternoon.

Michael Hobbs and Jamie Mackintosh scored tries for each team in the second half while Dan Prior finished the scoring for the Blues.

Blues coach Pat Lam said afterwards that he was pleased with the result but was concerned about the refereeing a week out from the start of the season.

“The game was always going to be around the breakdown and we knew they [Highlanders] would come in pretty hard and it’s fair to say they dealt with it pretty well,” Lam said.

“It was a good lesson for the referees as well, because with everything they did there, they’re going to be in trouble if they keep trying to do that.

“Overall we’re pretty happy, we had guys get more than 40 minutes, Keven Mealamu, that’s another good bonus for us.

“We are scoring our tries, but we’re coming away not satisfied because we know there are four or five more that we need to tidy up.

“I’m pretty happy with the defence, we’re putting on a lot of pressure and that’s a lot better than last year.”

The Blues played the Braid brothers, Luke and Daniel on the flanks with Jerome Kaino at No 8 and Lam hinted that this could be how his side line up this season.

“There’s a good chance of that throughout the year,” he said.

“There is some good competition, Chris Lowrey has been playing really well and has had a lot of game time.

“Luke still looks short of a gallop but we have quality loosies and that’s going to be crucial for us.”

Piri Weepu came on for Alby Mathewson at halfback in the second half, confirming that he is an option in the No 9 or 10 jersey for Lam, however he still has a long way to go with his fitness.

“Piri came on and you can see he’s short of a gallop but he did show touches of class,” Lam said.

“Once he gets fully fit we’re going to get the benefit of that and as we know through the season that it’s going to be crucial that we have quality through the squad.

“Piri is determined to get himself into better shape and it’s the same for some of the other guys who aren’t quite there.”

Asked if he was disappointed with the poor physical condition that Weepu has joined the team in, Lam said he wasn’t surprised.

“Obviously these [All Blacks] guys have had a longer break and a lot of them have enjoyed themselves after the World Cup.

“We knew that that was going to be a possibility because we had everyone else five or six weeks before Christmas and these guys were coming in late.

“It’s all about who performs in competition regardless of what they’ve done or their names.”

Meanwhile, Highlanders coach Jamie Joseph said he was pleased with how his side did considering their high injury toll which meant scrum coach Kees Meeuws had to pack down late in the game.

“There were a lot of penalties today and we’ve got to sort that out. But the first thing we have to sort out is being able to field a team without coaches,” he said.

“At the moment we’ve got quite a few out, but having said that there are some spirited guys there.”

As for the new breakdown interpretations, Joseph said it’s an area where they’re devoting a lot of attention.

“The rules are going to be different this year,” he said.
“They’re going to be hard on the tackle assist so for me that’s the area that we needed to work on.”

Hurricanes come from behind to beat the Chiefs 23-19 in Taupo!

Great to see the boys get a win before they leave for South Africa tomorrow to kick start Super Rugby season. 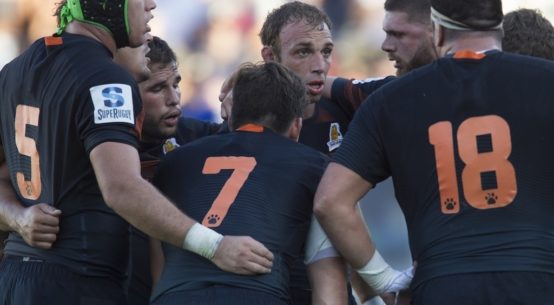