Skip to content
You are here
Home > Uncategorized > Preview: Bath vs Exeter 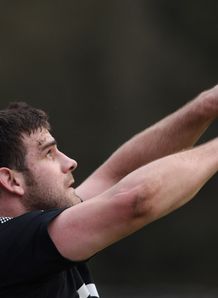 Rob Webber makes his debut for Bath as they welcome Exeter Chiefs to the Recreation Ground on Saturday for the third pool match of the LV= Cup.

Webber, who joined the club in pre-season, will link up with Charlie Beech and Anthony Perenise in the front-row. Stuart Hooper captains the side, with Dave Attwood joining him in the second-row.

Speaking earlier this week, Webber explained how much he’s looking forward to his first run out.

“I arrived here thinking my shoulder was all recovered, and was in the full swing of pre-season, then a week or two before the pre-season games it reared its ugly head again and a couple of scans revealed it hadn’t healed properly,” he said.

“I had to have the operation done again, which meant I missed the season up until now. It’s been a long slog, lots of individual weights and rehab and work with the conditioning guys, who, along with the medics, have been great. It was a bit of a lonely existence really so it’s fantastic to have been back involved with the lads the last few weeks.

“I’m chuffed to bits to be getting my first start. Bit nervous after such a long time out, but I just need to get amongst it, do the basics well and build game by game to get back to the standards I expect of myself.”

There’s also an exciting debutant in the back-row, with Mat Gilbert coming onto the openside flank for his first appearance for the club. Ben Skirving also returns at number eight, with Nick Koster shifting to the blindside.

Fly-half Tom Heathcote returns from training with Scotland to partner Mark McMillan in the half-backs, with young flyers Olly Woodburn and Richard Lane on the wings. The bulldozing duo of Ben Williams and Matt Banahan combine in the centres, with Bucharest hat-trick hero Jack Cuthbert starting at fullback once more.

On the bench, Ireland’s most capped scrum-half Peter Stringer is in line to make his debut in a Bath jersey, with both Ross Batty and Semesa Rokoduguni returning to the squad.

Meanwhile, the Chiefs have looked to utilise their squad to the full for this weekend’s fixture. And that means a complete new-look starting XV from that which faced Leinster a week ago.

Skippering the side and set to make his first-ever competitive start for the Chiefs is summer signing Kai Horstmann (pictured), who has now fully recovered from a hamstring injury. Whilst also set to make his debut for the club is Fijian flyer Watisoni Votu, who after a protracted visa process, is finally ready to unleash his attacking talents.

England Under-20s starlets Jack Nowell, Sam Hill, Henry Slade and Luke Cowan-Dickie all start, whilst there is plenty of experience around the park in the shape of Nic Sestaret, Craig Mitchell, Damian Welch and Ben White.

Form: Bath’s only defeat at The Rec in any competition since September was 0-22 to Saracens in the Premiership on 22 December. Bath have lost two of their last three games in the LV= Cup, but have not lost at home in a pool game in this tournament since Leicester visited The Rec on 4 October 2008. Exeter Chiefs are one of just two teams who have won both their opening encounters in this season’s LV= Cup (the other is fellow Pool 1 rivals Harlequins). The Chiefs are without a win in their last five fixtures in all competitions, but have won their last two away games in the LV= Cup: at London Wasps and London Welsh. Exeter have not beaten Bath in any competition since a 1st round tie in the John Player Cup in season 1977/78, whilst Bath won 31-3 at Sandy Park when the two clubs met in round four of the LV= Cup last season.

Stormers searching for a hooker