Skip to content
You are here
Home > Uncategorized > Preview: Harlequins vs London Welsh 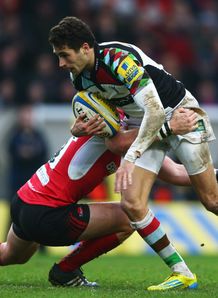 With ten players away on international duty, Harlequins have blended youth and experience to face London Welsh in the LV= Cup.

Ollie Lindsay-Hague, who was one of five young players to commit their future to the club this week, starts at full-back while Ben Botica and Karl Dickson partner at half-backs.

In the forwards, Dave Ward starts at hooker, with Charlie Matthews and Sam Twomey completing the front five.

Luke Wallace, who has been shortlisted for this season’s “LV= breakthrough player of the year award”, captains the side and is joined in the back-row with Tom Guest and Joe Trayfoot.

Among the replacements, Harry Allen will look to make his first appearance for the club, while Ross Chisholm is named after recovering from an ankle injury sustained against Leicester Tigers in September.

Ross, 34, who won 25 caps for Scotland, is in his fourth season at the Exiles and has been in tremendous form, having played a pivotal role in helping the club to Championship success last year. Ross joined Welsh from Saracens in 2009 and has so far amassed 525 points for the club, including scoring two tries.

Ross is one of nine changes made by head coach Lyn Jones to the side beaten 39-17 by Stade Francais in Valenciennes last weekend in the Amlin Challenge Cup.

Tom Voyce and Sonny Parker also come into the backs, while in the forwards Paulica Ion starts at tight head and Tom Bristow at loosehead. Elsewhere in the pack, Kirill Kulemin, Ed Jackson and Adam Balding return to the side, while Michael Hills, a first half replacement against Stade, continues in the number seven jersey.

On the bench, there’s a welcome return from injury for Martin Purdy and Daniel Browne, while there’s also a place for Neath scrum half Luc Jones – son of London Welsh head coach Lyn – who joins the club on loan.

Form: Harlequins have won their last eight matches in all competitions since losing 18-21 to Bath at The Rec in the Premiership on 23 November. Quins are unbeaten at the Twickenham Stoop since Saracens were the visitors on 30 September, and have won both their encounters in this season’s LV= Cup against Northampton and Bath. London Welsh’s only victory in their last six games was 62-5 at home to Prato in the European Challenge Cup on 12 January. The Exiles have lost both LV= Cup ties so far to Exeter and Gloucester, and have lost on all three previous visits to the Stoop in all competitions. London Welsh’s last competitive victory over Harlequins was 45-12 at Twickenham in the 1st round of the RFU Senior Cup in September 1972.