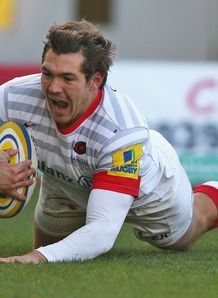 Alex Goode: Provided plenty of experience at the back for Saracens

Saracens play their first match at their new Allianz Park home on Sunday when Cardiff Blues are the visitors in the LV=Cup.

Sunday’s match is a test event at Allianz Park with a limited attendance and in team news ahead of what will also be the first professional game on the artificial turf pitch; Alex Goode and Mouritz Botha are both in the starting line-up having been released by England.

England U18 international Maro Itoje will also make his debut for Saracens in the back row.

Another player returning from injury is flanker Justin Melck to be named on the bench for his first appearance of the season while he is joined among the replacements by John Smit and Alistair Hargreaves.

Meanwhile, Cardiff Blues boss Phil Davies has made a number of changes to the side that beat Sale Sharks in the Heineken Cup last Saturday.

Jason Tovey comes in at full-back, Owen Williams moves to the wing meaning there is a new centre partnership of Gavin Evans and Dafydd Hewitt.

Harry Robinson remains on the other wing but there is a new halfback partnership with Ceri Sweeney linking up with Lewis Jones.

There is almost a totally new pack with Sam Hobbs the only player from the starting line up from last Saturday’s match.

Form: Allianz Park becomes the 29 different ground to host an LV= Cup tie, but the first with artificial turf. Saracens have won their last six matches in all competitions since their 9-15 defeat at Munster in the European Cup on 8 December. Saracens have not lost to a Welsh opponent since Newport Gwent Dragons visited Vicarage Road in the LV= Cup on 7 February 2010 and won 23-22. Cardiff Blues’ only defeat in their last four matches was 25-45 in Toulon in the European Cup on 12 January. The Blues have lost their last five away games in the LV= Cup since beating Scarlets 38-23 in Llanelli on 6 February 2010, whilst the last time they won in England in the tournament was on a trip to Gloucester in November 2009. The two teams have met twice before in this tournament with the Blues victorious on both occasions: 37-20 at Cardiff Arms Park in October 2005 and 40-29 at Vicarage Road a year later.

Italy to play Japan in Tokyo