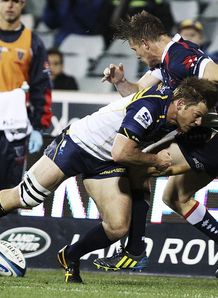 The Brumbies booked their place in the 2013 Super Rugby play-offs after powering past the Melbourne Rebels 39-17 at Canberra Stadium on Friday.

The hosts are now five points clear of the second-placed Reds in Australia, with Jake White’s side having one game remaining against the Force.

Despite the Rebels being only 13-10 behind on 43 minutes, in truth this result was never really in doubt as the Brumbies’ superior running game dominated proceedings, even with key playmaker Nic White being forced off after eight minutes.

Their first score arrived on three minutes when Sio barged over after metres were made by Speight down the right wing. Jesse Mogg was unsuccessful with the difficult extra two points.

The Brumbies were not done there as six minutes later wing Rathbone powered over on the left wing thanks to a fired pass from fly-half Matt Toomua.

An off-colour Jason Woodward did reply for the Rebels with three points off the kicking tee on 20 minutes to make it 10-3, which was how it stayed going into the changing rooms.

However, the Brumbies would return in scintillating form and despite English scoring following a breakout from his own try-line, it was the home side holding all the cards.

Rathbone would cross once more on 47 minutes before the try of the game arrived five minutes later when the impressive Peter Kimlin found Speight with a beautiful offload. The wing then set off 20 metres, splitting two defenders on the right en route to the uprights.

That put the Brumbies 25-10 ahead which soon became 30-10 when Faingaa scored a well-taken individual effort from 25 out, with Jake White’s charges hitting their straps.

Replacement back Zac Holmes would be the Brumbies’ final try-scorer just after the hour mark before Rebels replacement prop Alo-Emile went over for a consolation score.