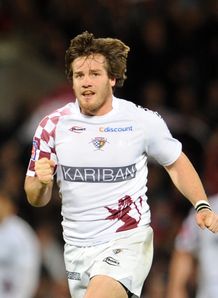 Coach Philippe Saint-André has also handed Perpignan wing Adrien Planté his first international start while on the other wing Maxime Médard returns to win his 33rd cap, almost four years to the day since scoring the winning try in Dundin – the last time France beat in the All Blacks in New Zealand.

Les Bleus will have a fresh faced half-back pairing as Racing Metro scrum-half Maxime Machenaud joins Lopez in the starting XV. Both are just 24.

21-year-old lock Sébastien Vahaamahina starts in the second row while Luc Ducalcon is at tighthead prop in the absence of stalwart Nicolas Mas, who is still recovering from injury.

Toulon playmaker Frédéric Michalak features amongst the replacements along with club team-mate Maxime Mermoz following their late arrival due to the Top 14 Final.