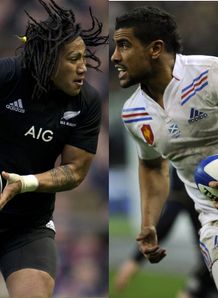 France kick off their first three-match tour of New Zealand since1968 on Saturday in Auckland, where the hosts are aiming to stretch their unbeaten streak at Eden Park, which is sold-out, to 30 games.

Of course, not many fans are concerned with what happened in 1968 (for the record, the All Blacks won the series 3-0 ) as most will see this clash as rematch of the controversial 2011 World Cup Final.

While there are obviously a handful of survivors in the French side who will want to exact revenge for a result that many felt should have gone the way of les Bleus, both sides’ focus will be firmly on the future.

Indeed, France arrive with young squad that shows significant changes across the park. There are just two players in the French starting XV that featured in the RWC Final (Maxime Médard and Thierry Dusautoir) and just six in the entire matchday 23.

So far the rebuilding process has been largely unsuccessful for coach Philipe Saint-André, who has stepped up the influx of new faces since the suffering ignominy of leading France in their worst Six Nations campaign of the professional era. The good news for French fans is that those new faces are very exciting, though they have have to be tested on the biggest stage.

Understandably there are a lot of familiar names in the hosts’ side. Steve Hansen has been blessed with a relatively smooth transition and even if Israel Dagg and Ma’a Nonu are under pressure to retain their spots, at no stage have there ever been notions of totally revamping the side that dominated the Rugby Championship.

That said, like almost every national team in the Test arena, the All Blacks are starting a new cycle and this series should give us an insight into the direction the reigning world champions are taking as they play their first game since losing to England at Twickenham.

With Dan Carter and Richie McCaw absent and Keven Mealamu on the bench, only two starting All Blacks have in excess of 50 Test caps – Nonu will win his 77th cap while Conrad Smith claim his 67th.

The likes of Aaron Cruden, Sam Cane, Dane Coles and Brodie Retallick are ushering in a new generation and the next three Tests will go a long way to determining how much longer it is necessary for the old guard to hang around.

New Zealand have named a line-up with an average age of 26, a year less than the French average, although the hosts have a slightly more experience as they field a team with 376 caps, compared to the visitors’ 352.

France are lucky to be able to field that many experienced players. Had it not been for Toulouse and Clermont being knocked out of the Top 14 in the semi-finals, PSA would have struggled to assemble a team anywhere near full-strength.

There are a number of ways of seeing this game. Billing it as a rematch of the past World Cup Final would suggest an evenly-contested affair; A clash between the world’s top-ranked team and the Six Nations wooden spooners points towards a hiding; A side missing their two most iconic players facing their bogey team would have us throwing the form booking out the window.

All these perspectives reveal part of the tale but the none paints the whole picture. What we will see is a clash between two teams in the midst of evolution: one that is still trying to find its feet, against one that never really stopped running.

For New Zealand: 24-year-old fly-half Aaron Cruden has a chance to take another step out of the shadow of you-know-who. New Zealanders were once frightened to death at the prospect of losing the world’s best pivot but in Cruden they now have a playmaker who not only instils confidence but also inspires. With 20 caps under his belt, Cruden is slowly starting to shake off the tag of ‘back-up’ and is starting to push for recognition as New Zealand’s number one 10. That may not happen this weekend, or even this month, but time is on Cruden’s side. If he wants to speed up the process, this weekend is the perfect time to start.

For France: Talk about being thrown into the deep end. The last time France were at Eden Park a young scum-half made his debut in the dying minutes of the World Cup Final (Jean-Marc Doussain is on the bench again). This time it’s fly-half Camille Lopez who makes his international bow at fly-half. Like his opposite number, the 24-year-old has all the key attributes to make a great pivot: a deadly-accurate, powerful left boot and an exception ability to read the game. At 98kg, he can punch a hole in a defensive wall too. But does he have the nerves for the big time? We’ll find out soon enough.

Head-to-head: All Blacks flank Sam Cane is in a similar position to Cruden and will want to show Steve Hansen that he too is a worthy successor to the number seven jersey. He couldn’t ask for a better test of his credentials as he faces Thierry Dusautoir, who is not only one the world’s top flanks but often produces his best against New Zealand. Also keep an eye on the tussle at inside centre between the best twelve in Europe, Wesley Fofana, and Ma’a Nonu, who has had a Super Rugby season to forget but somehow always comes good in a black jersey.

Prediction: The All Blacks have played France 51 times since 1906, winning 38 times to France’s 12, plus one draw. The last time the All Blacks lost at Eden Park was against the French in July 1994. Englishman Wayne Barnes is the ref, the second time he has taken control of a game between the two nations, the first being the 2007 World Cup quarter-final in Cardiff. We know what happened then. But we won’t pay much heed to that result and will back the men in black to claim their fifth straight win against les Bleus. New Zealand by 14 points

England will cope without Tuilagi