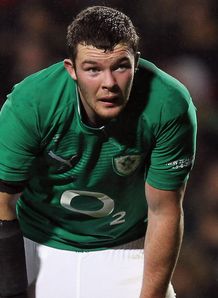 With several first-choice players named in their starting XV, the United States will fancy their chances of beating a young Ireland side in Houston on Saturday.

They also welcome back hooker Chris Biller and scrum-half Mike Petri who missed the Pacific Nations Cup loss to Canada on May 25 through injury.

Eagles coach Mike Tolkin believes the inclusion of these players will boost their chances of claiming an unlikely win.

“I think they bring a lot of veteran leadership,” he said.

“That’s important. When we were away we had a lot of veterans out. This squad introduces veterans and pros back into the system and they’re great athletes that bring fresh, new energy.

“They exude confidence and it resonates within the squad,”

The last time these sides met, Ireland failed to get firing before claiming an unconvincing 22-10 win in a 2011 World Cup tie in New Plymouth.

“It still brings all of the possibilities and challenges of the World Cup. That’s the atmosphere in the group and the psyche of the guys in the squad going into this.

“We have some good players on the bench who normally would’ve started.

“We feel like we’re getting some good depth. Going into this game we’re going to give a good fight–the guys know what they can do and what they’re capable of.”

Ireland caretaker coach Les Kiss will be without the services of 10 first-choice players who are on duty with the British and Irish Lions on their tour to Australia.

Kiss, who will stay on as defence coach when former Leinster boss Joe Schmidt takes over the reins as Ireland’s head coach at the end of their two-Test tour to North America, believes this match and their next Test against Canada presents a challenge for several newcomers to make the most of their opportunities.

“Every Test is a must-win game,” he told Skysports.

“There is a real opportunity on two fronts, to bring players away so that they are well informed about what is required at this level and to prepare for Test matches come November.

“For ongoing transition into a new structure there is an opportunity to know what the players can do.

“These two Tests are ideal for that. It is a long time since we last played these boys in 2011, it was 60 minutes before we got away from it was tough, right until the back end.

“It is a different team, the US have variation on their game plan, their attack is better and they are improving.

“We want to win two tests. That’s what it is about and if we come out the other end well informed about what faces us going into November it will be a good thing.”

For United States: Flanker Samu Manoa has been one of Northampton Saints’ unsung heroes during their recent march to the Aviva Premiership Final. Equally at home at lock, Manoa is a tireless workhorse who will provides real grunt to the Eagles’ forward effort. The 27-year-old is a strong ball carrier but also an accomplished defender who enjoys the physical nature of the game. If he builds up a head of steam he could prove a handful for the Irish defence.

For Ireland: Ireland speedster Simon Zebo is one to keep an eye on as he is one of his side’s most dangerous attacking weapons. Zebo has enjoyed a phenomenal rise on the international scene and despite only making his debut in 2012, he is already considered a certainty for his country’s run-on side even when their more experienced players are available for selection.

Head-to-head: The battle between United States captain Todd Clever and his Irish counterpart Peter O’Mahony will be interesting to watch. Clever is a seasoned campaigner whose experience will be valuable to his side while O’Mahony is still relatively inexperienced and captaining his country for the first time at Test level. Both will be skippering their sides as number eights and their leadership and decision-making could play a huge role in deciding the outcome of this clash.

Prediction: Although Ireland are fielding an inexperienced team and the Eagles have several stalwarts in their line-up, the men from the Emerald Isle will still hold the upperhand. Ireland to win by between 15 to 20 points.