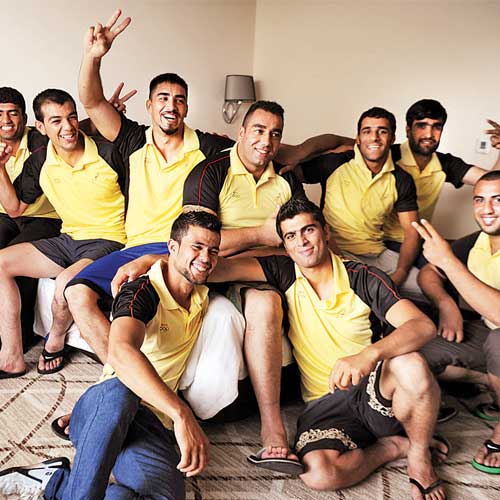 Sayed Sadat had donated 70% of his liver to his mother six months ago.

“Ek maa ke liye jigar de diya, dusri maa ke liye jaan dene ko bhi tayyar hu (I’ve given my liver to my mother, I’m ready to give my life for my country,” says Sadat, as his teammates lift his T-shirt to show the long stitches around his stomach.

Afghanistan rugny captain Sayed Mustafa Sadat, 31, donated 70 per cent of his liver to his mother in Delhi about six months ago. He’s back in India, this time to lead his country in the Asian Rugby Sevens Series to be played in Mumbai from today.  Sadat says he’s fit to play now after a brief stint away from the game, and can’t wait to get back on the field. His mother, too, is recovering well and will undergo check-up three months from now.

Sadat’s spirit is not an exception for the Afghans, who ooze confidence and optimism despite living in a war-torn country. Ask the 10-member squad if they ever fear for the future of the sport if things get worse and pat comes the unanimous reply: “It will never get worse.” Javid Rahmani breaks a few moments of silence. “If the Taliban does take over our country, the sport — and sports in general — will be dead. But that will never happen.”

His teammates nod in approval, but the silence gets longer. This time it’s 32-year-old Hamid Basheri who opens up.

“Violence was there before, but now things have improved. There is a lot of difference between what you see on TV and the reality,” Basheri says, backed by another round of approval.

The Afghans started playing rugby only three years ago, after Sadat and Javid saw a couple of international matches on television and wanted to play the sport themselves. They managed to convince boxers, weight-lifters, volleyball players and a few others in various villages to switch their choice of sport, and about 10 of them gladly did. They now have a full-fledged Afghanistan Rugby Federation (ARF) and participate in various Asian and world tournaments.

“The sport is developing slowly,” Steve Brookling, technical advisor of ARF, says. “There’s no place to play. That’s been the problem in spreading the game. There’s no money for travelling. It’s a new sport for the Afghans, which fascinates them and there are little kids playing the sport.”

It is precisely this that keeps the current crop going. “Rugby will become a popular sport. We have three to four junior teams playing right now. We train them and are trying to make them strong. When they see us on TV, they want to join too,” says Sadat, adding that rugby will touch the same heights in the future that cricket and football have risen to at present in their country. “One day it will. Afghans are very interested in rugby. Unke jasbe mein hai.”

The team gets their regular dose of competitive matches at home thanks to the forces of North Atlantic Treaty Organisation (NATO). “We have a match against them in two weeks,” says Rahmani. “Yes, the goraas (foreigners) do help us with the game, but there’s nothing in terms of sponsorship.”

Far from cricket’s million dollars, rugby does not give these men enough money to make ends meet. Abdul Bari Gazang, 22, runs a shop during the day and practises after his daily work. The rest too, either work or study alongside. Do they fear for their families when they’re out on tours, or even, vice-versa?

“Rugby is a very dangerous sport. But when we go out, our families only hope that we come back with medals and trophies for Afghanistan. They say you don’t worry about things here, just win and come,” says Sadat.

Afghanistan had got the wooden spoon in last year’s edition. So are they hopeful of a change this time around?

The odd moments of silence turn into laughter.