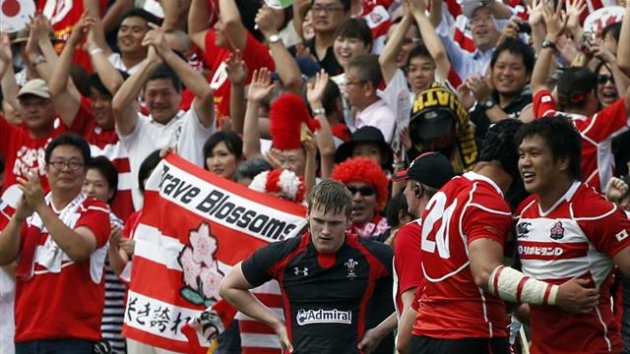 Rugby minnows Japan, long accustomed to suffering bruising losses against top tier opponents, are daring to dream big when they take on all-conquering New Zealand in Tokyo on November 2.

Japan coach Eddie Jones said his team are training to “beat New Zealand”, the level of confidence coming after the ‘Brave Blossoms’ claimed their first win over Six Nations champions Wales in June.

That win over an inexperienced Wales side has led to public interest in the game reaching an unprecedented level, with tickets for the match to be held at Tokyo’s 25,000-seat Prince Chichibunomiya Stadium selling out for the first time.

“The All Blacks are a global brand, and this has obviously fuelled demand for the game. But Japanese rugby fans are also very eager, with Japan’s win against Wales in June boosting the team’s image and raising expectations,” said Shoichi Midoro, head of communications at the Japan Rugby Football Union.

The match will be broadcast on a public television network, a rarity in a country dominated by baseball and soccer.

But while expectations are high in Japan, who will host the 2019 rugby World Cup, history paints a more depressing outlook for the rare clash.

Steve Hansen’s team are on a 10-match winning streak, retained the Rugby Championship title earlier this month and have only ever lost to six sides – Australia, England, France, South Africa, Wales and the British and Irish Lions – in 110 years of playing Tests.

Japan, however, have a poor record against top rugby playing nations, with only one win each over Wales, Scotland and Argentina in all their years of competing.

They will take heart that New Zealand have their sights set on bigger clashes later in November against France, England and Ireland and will rest a core group of players for the Japan match, but captain Richie McCaw and flyhalf Dan Carter will play..

Japan will pick a full strength squad for the match against the world champions, which will, even in defeat, provide a valuable chance to check their progress ahead of the 2015 World Cup.

“Japan aims to be among the top 10 teams at the 2015 World Cup, and facing the best team in the world will provide invaluable experience,” said Midoro.

“The players are not merely out to put up a good fight, but are training to win. The match against the All Blacks will provide a very good chance to measure where they stand currently.”