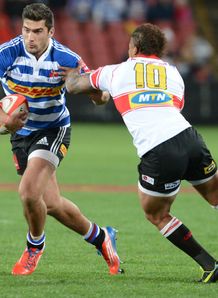 The Golden Lions face a daunting task when they take on the champions in their Currie Cup semi-final in Cape Town on Saturday.

The Johannesburg-based team are huge underdogs against their star-studded hosts, who head into this clash full of confidence after completing the league phase of the tournament with an unbeaten record.

The Lions, however, have shown throughout the tournament that they are a side with a never-say-die attitude who play for a full 80 minutes and who refuse to go down without a fight.

WP boss Allister Coetzee believes that the Lions will be a threat towards the end of the match again and has therefore included Springboks like Schalk Burger, Juan de Jongh and impressive utility forward Michael Rhodes on his bench as a means to counter the visitors during the latter stages of this clash.

“This is quite a good bench to match the Lions’ intensity which we’ve seen peak towards the end of matches,” Coetzee said.

“At the start of the season, we couldn’t rely on our bench to make an impact in the second half. Now, we’re spoilt for choice.”

Coetzee has acknowledged that his side are favourites to retain the trophy but is adament that they will not take the men from Johannesburg lightly.

“To underestimate the Golden Lions would be the biggest mistake ever,” he said.

“This Lions team knows how to win.

“They actually played poorly and won against Griquas last weekend. They came from behind and in the second half they’ve been the side that up the intensity and put a lot of teams under pressure, so I’m under no illusions that we have to be careful and not underestimate the Lions.”

This clash will also see Springbok skipper Jean de Villiers lining up in midfield with Damian de Allende who has been one of WP’s best performers in 2013.

WP back-line coach Robbie Fleck hailed De Allende’s form this season and believes he will have a huge influence for the Cape-based side.

“Damian has been exceptional in getting us over the advantage line and his game has reached a stage where he is one of the best centres in South Africa,” said Fleck.

“He has started to show class with his distribution skills and he brings our forwards into the game. Last year he played at the same stage of the Currie Cup and his contribution was huge.”

Lions boss Johan Ackermann knows his side face a huge challenge but believes his side can upset their hosts.

“They know how to win and because of the experience they have, but it is a once-off game,” he said.

“We’ve got a mindset of belief and we will give it our best shot. If it is good enough then we will win.”

The 2011 champions’ expansive game-plan has reaped the rewards throughout their campaign as they have been the tournament’s best attacking outfit this season with 40 tries scored.

While knock-out matches are often a tight arm wrestle, Ackermann said his team would not divert from their flowing style and his plan is to make full use of dangerous attackers like Marnitz Boshoff, Lionel Mapoe and Anthony Volmink.

“We want to excite our fans by the way we play and we want to play an exciting brand of rugby,” he added.

“To change that and suddenly be a defensive side or a kicking side is not what we stand for.”

For Western Province: The men from the Cape head into this match full of confidence after a superb performance in their victory over the Sharks in Durban last week. Although it was a fine team effort Springbok number eight Duane Vermeulen deserves a special word of praise after a superb performace. Vermeulen’s ball-carrying ability and defence is well documented, as he always shines in those departments, but an area of his game which has come on in leaps and bounds his ball-winning ability at the breakdowns. The Lions will have to come up with a brilliant plan if they want to keep him in check.

For Golden Lions: The men from Johannesburg have several game-breakers but a player to keep an eye on is speedster Anthony Volmink who can wreak havoc from anywhere on the park. Volmink is not the Lions’ top-try-scorer (six tries) for nothing and if WP allow him too much space he will make them pay.

Head-to-head: Both sides have great attacking ability, especially amongst the backs, and the duel between the two fly-halves – WP’s Dimitri Catrakilis and the Lions’ Elton Jantjies – will be an intruging one. Jantjies played for the Stormers in Super Rugby and will be determined to outplay Catrakilis, who has impressed recently for WP. Both are fine goal-kickers and their accuracy from the kicking tee could determine this encounter’s outcome.

Prediction: With it being a semi-final, anything is possible but WP’s class, especially off the bench will prove to be the deciding factor.

WP to win by six points