Following a 62-13 victory over Russia, Head Coach Gary Gold has named his starters for the Men’s Eagles’ second match of a three-game June test series with No. 6 Scotland this Saturday. Taking place at BBVA Compass Stadium in Houston, TX, also part of the Emirates Airline Summer Series, the starting XV will remain consistent with two changes made to the bench.

“Despite a few early challenges, the chemistry of this group worked well last week – even though we’d only spent a relatively short amount of time together as a unit,” said Head Coach Gary Gold. “We’ve had another week to build on our rhythm as a collective and grow in our individual roles which will undoubtedly help us against a quality side in Scotland.”

Last time the Men’s Eagles faced Scotland at the 2015 Rugby World Cup in England, they fell 16-39 after conceding a 7 point lead in the first half of play. Overall, both teams have met four times with Scotland owning the better side of the score in each affair. However, since their last meeting in 2015, the United States has grown significantly in strength and execution, improving their overall record of 3-6-1 in 2016 to 6-3-1 in 2017.

Scotland recently began their tour of the Americas against Canada, defeating the Canadians 10-48; while the United States opened their summer schedule adding a win over Russia to their then 5-0 record. Now with 6 victories on the year, the Eagles will face their most difficult challenge this season as they aim to deliver another convincing performance to a home crowd in Texas.

With no changes made to the starting lineup, the Men’s National Team will see two new faces jump into action from the bench. Dylan Fawsitt will replace James Hilterbrand who fell to injury last week against Russia and continues recovery. Titi Lamositele will jump in for Olive Kilifi, as well.

Stuart Hogg will captain his country for the first time as Gregor Townsend selects 10 Glasgow Warriors in his starting XV to face USA on Saturday.

Head coach Townsend has changed all but three of the starting team to face USA in Scotland’s second summer tour Test at the BBVA Compass Stadium in Houston, Texas.

Glasgow Warriors full-back Hogg will captain the side that features two starting debutants – Glasgow Warriors pair Matt Fagerson (back-row) and George Horne (scrum-half) – both of whom will make their first international appearances alongside elder brothers Zander and Pete.

Lock Ben Toolis, wing Blair Kinghorn (both Edinburgh) and Sale Sharks wing Byron McGuigan are the three players to retain their places in a side that will see a further five players make their first start for Scotland at the home of the Houston Dynamos.

“We always planned to play as much of the squad as possible on this tour, and we also deliberately picked more Edinburgh players in the first game because their season finished earlier,” said Townsend.

“Now we welcome most of the Glasgow Warriors contingent into the team. On top of that there are seven players making their first starts for the country, which is really exciting, and we are looking forward to them going out and grabbing this opportunity.

“The USA have won their last six games and scored a lot of points in the process. They’ve beaten two teams that have already qualified for the Rugby World Cup – Uruguay and Russia – and put 60 points on both of them. They are definitely improving as a team and are playing with a lot of confidence.

“You can see in the way they attack and defend that they are well coached, added to which there are some exceptional individuals that offer running threats throughout their side, so this will be a real test for us on Saturday.”

It will be only the eighth time in close to 700 Scotland Tests when two sets of brothers have been on the field at the same time, joining the Evans and Lamont brothers (2010), Bulloch and Leslie brothers (2001), Milne and Hastings brothers (1990), and the Neilson and Orr brothers, who did so four times (1891-1892).

The starting changes are completed by the selection of Glasgow Warriors forward Tim Swinson in the back-row with Hamilton and Matt Fagerson, while Glasgow Warriors centre Nick Grigg forms the midfield with clubmate Pete Horne. 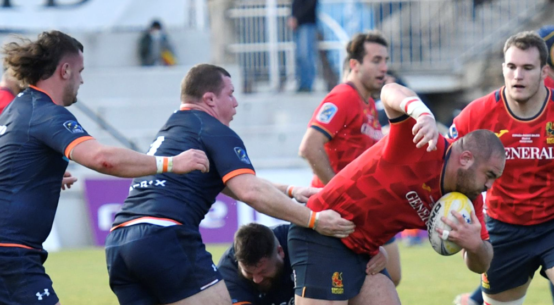