TOKYO, 30 Sep – World Rugby and the Japan Rugby 2019 Organizing Committee have confirmed that the France v USA match will be played in Fukuoka on 2 October at 16:45 JST as scheduled.

The decision has been taken following consultation with our weather information experts and the Japan Meteorological Agency, which confirms that Typhoon Mitag is lessening in strength, tracking further westward away from Japan’s coastline and therefore will not impact the match.

The decision was taken with the full support of the host city Fukuoka and the two teams.

Our primary objective is to always enable a match to be played as scheduled in the best interest of teams, fans and the integrity of the tournament. In line with robust tournament contingency plans, had the match not been able to be played at Fukuoka, an alternative venue would have been used.

While there is every indication that Typhoon Mitag will reduce in strength and have little or no impact on the tournament, we will continue to closely monitor the situation in partnership with our weather information experts, local authorities, transport providers and the teams, and will provide further updates as required. Fans are advised to monitor official Rugby World Cup channels for any updates.

TOKYO, 30 Sep – France coach Jacques Brunel has made 12 changes to France’s starting XV that triumphed 23-21 over Argentina for Les Bleus next Pool C match against USA at Fukuoka Hakatanomori Stadium on Wednesday.

The other big change for France is that long-serving number eight Louis Picamoles will captain the team for the first time in his ninth World Cup match and his 81st cap in total. He takes the role from hooker Guilhem Guirado, who will be on the replacements bench against USA.

Big changes are a precedent at Rugby World Cups for France. In 2015, Les Bleus made 13 changes in their starting XV between their opening match and their second match, which they followed into their third match with another 12 changes.

Inside-centre Gael Fickou, who was player-of-the-match versus Argentina, will earn his 50th cap for France in the match against USA.

FUKUOKA, 30 Sep – Will Magie could make his debut Rugby World Cup appearance from the bench against France on Wednesday, the latest instalment of a rugby journey that began when he played for Ealing Trailfinders U4s in west London, where his parents lived before moving back to the United States.

“It was my childhood club so I played there from ‘rugby rats’, which was U4s, all the way up to playing for the first team, which was pretty cool to do,” said the 27-year-old USA fly-half, above, who was born in the English capital and later captained the University of Leeds rugby team.

His senior debut in the Ealing side came at 21, after their promotion to English rugby’s second tier. His commitment to international representation had begun when he played for the USA U17s.

“Growing up, I was in America as much as I was in England. Any school holiday, we were over in the States, plus all of the summer, Christmas and Thanksgiving,” Magie said.

“With both parents born and having lived the majority of their lives in the US, and all my extended family being American, I definitely feel very American. It’s a great sense of pride and honour to put on the jersey at every opportunity I get.”

Magie played for the USA in two World Rugby U20 Trophy competitions, finishing seventh in 2011 in Tbilisi then triumphing in Salt Lake City in 2012, in a team that featured fellow RWC 2019 Eagles squad member Mike Teo.

“I probably played 20-odd games from U17s to U20s for the USA,” Magie said. “It’s awesome, and every time I get to sing the national anthem, it’s a sense of huge pride and honour.”

Having played for club side Glendale Raptors for three years, two of them in the newly founded Major League Rugby, news of where Magie will play after the World Cup has yet to be announced.

His focus, though, is on the Eagles putting in an improved performance against France after their opening 45-7 defeat by England.

“France are a very strong opponent, a Six Nations team just like England, so they’ll bring a lot of physicality. We’re just looking forward to the opportunity to go up against another great team, another top-10 team in the world rankings, and show what we’re about.”

Magie referred to “harsh lessons” having been learned following the Eagles’ defeat in Kobe, and said that on Wednesday the USA must “stick in the arm-wrestle by bending not breaking”. 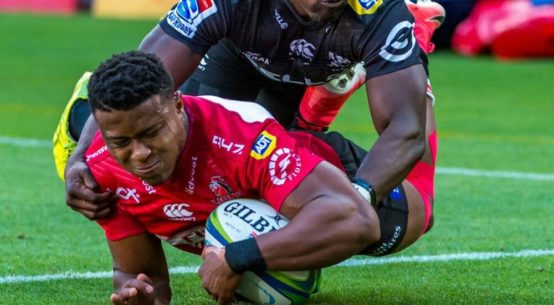