TOKYO, 19 Oct – South Africa are well known for being a tough, uncompromising, physical unit. But in Japan, there has been more than a hint of guile to go with the grunt.

The Springboks were adept at unlocking defences with their kicking during the pool stage. Tighten up your defence to counter their powerful forwards and you leave yourself exposed to a wide kick.

Handre Pollard, Willie Le Roux, above, and Elton Jantjies, have been like quarterbacks, identifying the opportunity and firing kicks into space.

Canada have three defenders back for this try, below, but they cannot stop Jantjies’s aerial assault. The problem for South Africa is they do not really have much of an attacking line towards the nearside of the pitch. A Jantjies pass would be to an attacker standing level with him who would have to generate speed once he catches the ball. That is not going to be successful. Better to execute a kick for someone to run on to. Jantjies lands the kick perfectly in the seam between the deep defenders and the defensive line. Warrick Gelant collects and breaks out before passing to Cobus Reinach to score.

Pollard can pull off the same tricks, as demonstrated below. His team-mates tighten up the Italian defence with their carrying. A tight defence is not necessarily an issue; they can still drift to cover the overlap. The winger standing in a field of space will find himself consigned to the sideline once the drift defence has made its way over. The way to ensure the winger stays in the clear is to drill a crossfield kick into space. Pollard sees Cheslin Kolbe has space to work with. Italy do not want that. The precise kick leaves Italian winger Michele Campagnaro scrambling to close down Kolbe.

Willie Le Roux completes the set of backs who are all capable of dismantling your defence with the boot. In the clip below, Pollard keeps heading to the far side of the pitch to keep the Italian defence spread across the pitch. They have to expect an attack from either side. Le Roux calls for the ball to be passed back in the opposite direction. This is called a snap-back. When you snap back against the direction you have been playing you put huge pressure on the deep defenders. Italy have two players deep, and when the ball is moved to the far side of the pitch the far defender heads to that sideline and the other defender fills the middle of the pitch. When South Africa snap back with Le Roux, the Italians have nobody defending the near side. Le Roux’s kick finds grass and then Makazole Mapimpi, who scores.

The South African gameplan is pretty simple; they want to grind you down with their ball-carrying forwards. If you want to stop them then you need to cram defenders tight to the breakdown but when you do that you are vulnerable to the crossfield kick. The number of talented kickers in the side also leaves defences exposed.

If you defend with two deep defenders and tell them to follow Pollard, you can be tricked by Le Roux stepping in to kick back the other way, or scrum-half Faf de Klerk kicking into space.

Working out how to cover all the South African options will be an exceptionally hard task for Japan. 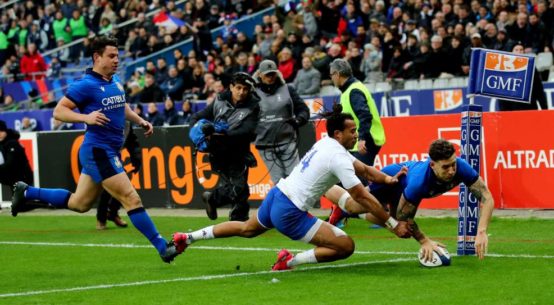