There will be plenty at stake when the Crusaders take on the Highlanders in their New Zealand South Island derby in Christchurch on Friday.

Both sides have two matches left before the tournament’s knockout stages and as the defending champions and current table-toppers, the Crusaders will be determined to finish the league phase on a high, while the Highlanders are desperate for victory to consolidate their spot amongst the play-off positions.

The men from Dunedin head into this match after a poor overall performance in their previous game, which they lost 45-22 against the Chiefs in Suva last week.

The Crusaders, meanwhile will be champing at the bit to make a positive impact as they had a bye last week after the three-week break for the June Tests.

There will be plenty of fanfare in the Crusaders ranks for this match as it will be a momentous occasion for their All Blacks loosehead prop, Wyatt Crockett, who is set to become the first player in Super Rugby history to play 200 games in the competition.

Matches between these sides are usually thrilling encounters as both like to run the ball from all areas of the field and with exciting attackers like David Havili, Seta Tamanivalu, Jack Goodhue and Richie Mo’unga in the Crusaders’ ranks and equally impressive strike runners like Ben Smith, Waisake Naholo and Rob Thompson lining up alongside potent playmakers in Lima Sopoaga and Aaron Smith, this should be another exciting hit out.

Although the Crusaders have won nine of their last 12 games against the Highlanders, they will be out for revenge as they were defeated 25-17 when these sides met in Dunedin earlier this season.

Despite last week’s loss to the Chiefs, the Highlanders are a side who have the ability to spring a surprise as they have done well at home and away this year.

Aaron Mauger’s charges have won three of their last five games away from home, with two of those three victories coming after they had trailed at half-time.

The last time these teams met: The Highlanders ended a three-match losing streak against the Crusaders when they claimed a 25-17 victory in a Round Five clash in Dunedin earlier this year. The 2015 champions outscored the Crusaders by three tries to two with Liam Coltman, Lima Sopoaga and Elliot Dixon dotting down. George Bridge and Bryn Hall scored the visitors’ tries.

Team news: Crusaders prop Wyatt Crockett will make history this week when he makes his 200th appearance in this encounter.

The champions’ head coach, Scott Robertson, has named a strong side for the match, which also features the return to the starting line-up of eight players from All Blacks duty, and the highly anticipated return of number eight Kieran Read from injury.

Sam Whitelock is back from his successful three-Test series as captain of the All Blacks to start at lock and resume the captaincy, while both Matt Todd and Ryan Crotty will resume their respective roles as vice-captains.

Crockett’s 200th Super Rugby match will be a special occasion as he will run out on to ‘Wyatt Crockett Stadium’ to bring up the milestone. It was announced earlier this week that the stadium would be renamed for this match in acknowledgment of Crockett’s achievement.

Meanwhile, Highlanders head coach Aaron Mauger has made three changes to his starting XV for this fixture.

In the only change to the back-line which started in last weekend’s defeat to the Chiefs in Suva, Richard Buckman comes into the run-on side on the left wing to replace Tevita Li.

Meanwhile, James Lentjes takes over from Dillon Hunt on the openside flank while Liam Coltman starts at hooker in place of co-captain Ash Dixon, who drops down to the replacments bench.

With 24 players named, Liam Squire is bracketed with Elliot Dixon as he works his way back from his shoulder injury he sustained in the recent All Blacks Test series with France. A final assessment of his fitness will be made closer to kick-off.

It could be a big night for young Tasman lock, Pari Pari Parkinson. If he takes the field, it will be his Super Rugby debut. 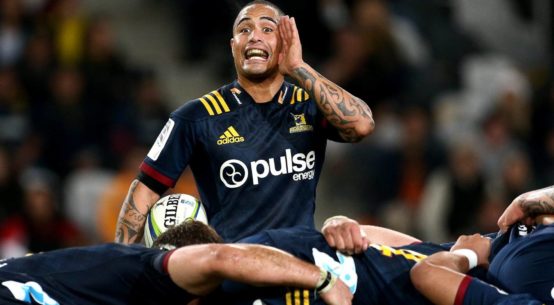