Skip to content
You are here
Home > Uncategorized > Preview: Leicester vs Wasps 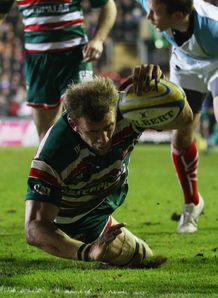 Back in: Tom Croft

Tom Croft will run out at Welford Road for the first time in ten months when Leicester Tigers host London Wasps.

Croft made his return from a neck injury in the league win at Worcester earlier this month and has been named in the Tigers starting line-up.

Vereniki Goneva and Boris Stankovich both return from injury and are included in the Tigers team.

Brett Deacon is named as captain, Dan Bowden starts at fly-half with Toby Flood and George Ford on international duty, and Matt Cornwell starts his first senior game at Welford Road since his return to the club last summer.

Academy products Tom Price and Harry Wells, both members of the England U20s squad, are in line for their club debuts, with Price named in the second row and Wells among the replacements.

Meanwhile, England U18 winger Tom Howe, a rising star in the London Wasps Academy set-up, makes his first professional appearance for the club having being handed a start out wide, while recent arrivals Stuart Commins and Charlie Hayter make their debuts, at nine and in the centres respectively.

In the pack, Oxford University’s Will Rowlands makes his first start for the club in the second-row, being given an opportunity to impress while Wasps find themselves short at lock due to injuries and international call-ups.

On the bench, Academy prop Harry Williams, who is currently studying at Loughborough University, will get his first taste of senior action, having made numerous appearances at A League level, while Dave Hughes, who has featured in this competition already this season, gets a spot on the bench, and James Harris, who played for the club last season, comes in as cover from Oxford University for a spell.

“The next two weeks offer a great opportunity for players who haven’t had much rugby over the last few months to put their case forward,” said London Wasps forwards coach Trevor Woodman.

“We need to manage our players in this fortnight so that guys who need a rest get it, and guys who need game-time get it. It’s a difficult balance given the size of our squad and who we have missing, but the players involved will look at it as an opportunity. Leicester will have lost a lot of payers to the international set-up but they have a hugely strong squad and it’s a tough place to go.”

Form: Leicester Tigers are unbeaten in their last eight fixtures in all competitions since losing 12-14 at London Wasps in the Premiership on 25 November. The Tigers’ only reversal at Welford Road in any competition since the 2011 Rugby World Cup was 9-22 to Harlequins on 22 September 2012. Leicester are the reigning LV= Cup holders and have lost just one of their last seven matches in the competition: 21-38 away to Saracens on 9 November 2012. London Wasps have won their last half a dozen games in all competitions, and ended an unwanted seven match losing streak in the LV= Cup with their 28-19 victory at home to Worcester in round two. The Londoners have not won on the road in this competition since a visit to Newcastle on 7 February 2010. The two clubs have met twice before in this competition, both at the semi-final stage at Millennium Stadium, in 2006 with Wasps winning 22-17 and two years later with Tigers exacting revenge, 34-24. Wasps have not won at Welford Road since September 2008.