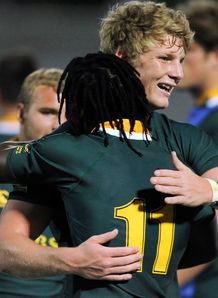 Defending champions South Africa saw off a spirited England fightback with a 31-24 victory on Day Two of the Junior World Championship.

Seabelo Senatla scored two tries as the Baby Boks opened up a 24-0 lead over their opponents in the first half, before a try from centre Sam Hill put England on the board before half-time.

Second-half tries from Eliott Stooke and Henry Purdy brought England back into contention but a try from Jacques du Plessis for the Baby Boks at the start of the half ultimately proved to be the difference.

Elsewhere, Argentina triumped 28-16 over Samoa thanks to tries from Juan Bernardini and Geronimo Mazzoni. Wales also clung on for a 26-21 win over Scotland and hosts France thrashed the USA 45-3.

Ireland ran out heavy winners over Fiji, wingers Rory Scholes and Darren Sweetnam both running in two tries each in a 46-3 victory.

Finally, three penalties from Simon Hickey and a try from Joseph Edwards took New Zealand to a 14-10 win over Tasman rivals Australia.

South Africa captain Ruan Steenkamp: “This was a must-win for us and definitely the boys were up for it, but there is still work to be done and we are excited for the next one. What pleased me I think was our kicking game, against USA we were running the ball a lot, but especially in this game we turned them around with our kicks and that was definitely great for us.”

England head coach Nick Walshe: “We’re massively disappointed with the result, but the second half performance was pleasing. We gave ourselves a mountain to climb in the first half and at 21-0 down we knew it would be tough, but credit to the guys – they dug deep and came very close to pulling it back.

“We’re not out of the competition, we will have to rely on a couple of results going our way but we all we can do is focus on playing well against USA on Thursday.”

Ireland two-try scorer Rory Scholes: “We’re pretty happy with the overall team performance, we set out to have a good defensive performance, they didn’t score a try, and we set out to get a bonus point which we did so overall we are happy. Our game plan was pretty well executed.”

Argentina coach Rodolfo Ambrosio: “Samoa are a very physical and hard side. They played very well and we had to match them in the forwards, which is why we won. We may not have scored so many points, but I am still very happy with our approach to the game.”

Samoa coach Viliamu Punivalu: “I wouldn’t say I’m disappointed, there were a few mistakes but the boys played with a lot of heart and that is what I said to them. Now the boys know they can do it, it is a just a matter of showing their ability and believing in themselves. I think they did in this game and I think they will be ready for Scotland.

Wales captain Ellis Jenkins: “This was very tough, Scotland dug in right to the end and we had to have a couple of really defensive sets to keep holding on to the game. Credit to Scotland, they were very strong team and a win is win, two from two we couldn’t ask for much more but we have got a lot of things to work on, first half we forced too many offloads, 50/50 offloads maybe we should have held on to the ball, but overall we are pleased with the win.”

Scotland coach Sean Lineen: “We let ourselves down against Argentina but we had our chance to win it here, and it was small margins. Against Argentina [Patricio] Fernandez kicked everything, and here young Sam Davies didn’t miss either. But their tries came off our mistakes, and for a few of the guys the occasion was pretty big for them, but they gave it everything, fantastic heart. Two tries each, it is very frustrating, we are scoring tries, our defence is pretty good, but it is our discipline and ourselves, of where we play the game and the executing of that and that is what is letting us down.”

Foley steps down as Waratahs coach