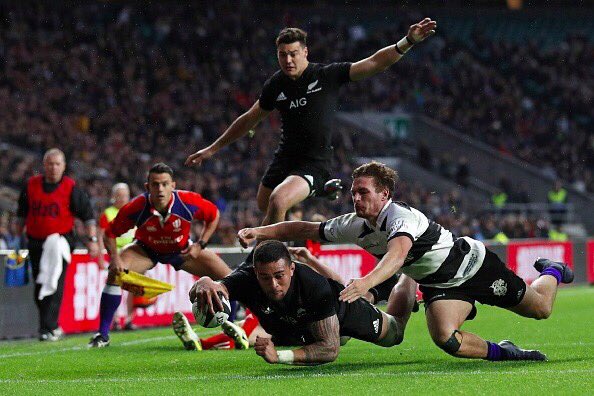 The All Blacks claimed a 31-22 come-from-behind win over a gutsy Barbarians outfit in a thrilling match at Twickenham on Saturday.

Tries from TJ Perenara, Vaea Fifita, Ngani Laumape, Sam Cane and Nathan Harris proved too much for the Barbarians who scored through Richie Mo’unga, Sam Carter and a George Bridge brace.

The Barbarians dominated the first-half much to everyone’s surprise, but the All Blacks had a ruthless ten-minute second-half patch to storm back.

The Barbarians came flying out of the blocks and stunned the world champions with the game’s first try after an eight minute spell in which they were camped in All Blacks’ territory. It was Mo’unga who exploited the overlap on the right wing to dot down after Andy Ellis’s good blindside pass from the ruck.

The Baa-baas continued to tear up the script when Steven Luatua made a thrilling intercept and just when it looked as if he was running out of steam, the dynamic flanker did well to offload to Bridge who dotted down for a 10-0 lead.

The All Blacks responded when TJ Perenara’s sniping blindside break off the back of an attacking scrum saw the nippy scrum-half feed Waisake Naholo on the overlap, who did exceptionally well to stay in touch and get the pass away back to Perenara who finished off a wonderful team move.

However, the Barbarians were not to be outshone and scored their third try when Sam Carter burst over after a series of powerful carries from the Baa-baas’ forwards to give the rogue outfit a shock 17-5 lead.

But Naholo once again came to the fore, turning creator for the second time when once again he produced a wonderful offload with his body falling to the floor for Fifita to dot down after the All Blacks had taken the ball through numerous phases spanning the length of the field. That would prove to be the last action of an exciting first half which saw the Baa-baas take a shock 17-10 lead in to the interval.

The All Blacks levelled matters at 17-17 after 53 minutes when Laumape took a wonderful crash ball from Tawera Kerr-Barlow to smash through Mo’unga and go over.

Soon after, the world champions took the lead for the first time in the game. It was Naholo who made the initial break and put the Baa-baas’ defence on the back foot. The ball was recycled and the All Blacks forwards took the ball through close quarters well before Cane burst over from close-range.

The All Blacks pulled away further as they got the luck of the bounce when Kerr-Barlow’s box-kick landed perfectly for Harris who gleefully gobbled up the opportunity. Barrett added the extras to give the All Blacks a 31-17 lead with 60 minutes gone.

There was still time for the Barbarians to score a consolation try when Bridge pounced on a Julian Savea grubber kick to grab his brace, much to the delight of their players and coaching staff as they signed off with a try.