Tigerish, unrelenting Tasman defence denied an impassioned Hawke’s Bay 80-minute assault to claim a 26-25 win in the final of the ITM Championship final at Trafalgar Park in Nelson on Friday.

Hawke’s Bay did finally break out from their own line in the 79th minute to score a try set up by a turnover, a great run by replacement flanker Trent Boswell-Wakefield and Brendon O’Connor that allowed halfback Chris Eaton to go over in the corner.

However, Hawke’s Bay’s superb first five-eighths Ihaia West was unable to convert from the sideline in what was a thrilling final that was a fitting end to the season.

The list of Tasman heroes was long and while first five-eighths Marty Banks’ points scoring feats, he scored 16 points to end the season with 170 points, made him an obvious candidate his cover defence was equally important.

But in the thin annals of Tasman rugby his 68th minute penalty goal to see his side out to a 26-17 lead may be the finest moment of all.

No. 8 Liam Squire had a massive game in coping with the attentions of the Hawke’s Bay loose forwards while lock Joe Wheeler in lineout and driving play demonstrated why he had been such an effective force all season.

Hawke’s Bay had cause to regret their inability to convert possession to points in the first half. It was almost 2:1 in their advantage while the tackle count was almost 3:1 by Tasman but handling mistakes in vital moments cost them.

Hooker Ash Dixon had a big game and made several key runs with the ball while halfback Alby Mathewson was a constant menace making plenty of use of the blindside avenue of attack.

Hawke’s Bay were quick to make their mark on one of the key players in the Tasman side, second five-eighths Tom Marshall. He was hit in a big tackle at Tasman’s first possession from a lineout. He spilled the ball and Hawke’s Bay were onto it in a flash.

They dominated the breakdowns subsequently and when on the Tasman 22m line, West took advantage of Marshall’s absence from the mid-field defence to move wide, then pass back to fullback Zac Guildford who raced in beside the posts for Hawke’s Bay to claim a 7-0 lead after two minutes.

Tasman were unflustered, however, and after Banks hit the posts with a penalty goal attempt, they kept the pressure on Hawke’s Bay and when they infringed at a maul close to the line after a run by Wheeler, they moved the ball for wing Bryce Heem to get over the line to allow Tasman to draw level after 10 minutes.

West landed a penalty just before a blindside break by Mathewson that looked certain to provide a try for centre Richard Buckman. However, Banks made a crucial tackle and the Tasman forwards came in behind to create a turnover, and so well had Banks done that he was back on the deadball line to take the ball and clear it to halfway.

Utilising their big loose forwards, with skipper Mike Coman prominent, Hawke’s Bay continued to dominate possession but handling issues denied it points and they paid for it after a Tasman breakout.

Fullback James Lowe sent wing Mitchell Scott flying down the sideline and it took a superb cover tackle by No.8 Karl Lowe to deny him. But the ball was put out by Hawke’s Bay and Tasman threw it in quickly.

James Lowe was back out in position and was able to feed Squire in for the try.

Hawke’s Bay set about righting the situation with some powerful drives at the line and the home team infringed a metre from the line. Advantage was applied and while the Bay were forced back, the penalty was awarded.

West raced to the mark in a bid to outflank the Tasman defence. But after tapping the ball he threw it wide and his opposite Banks made the intercept and raced 95m to score and give his side the 23-10 lead at the break.

West missed two shots at goal in the third quarter but when Banks failed to find touch from a penalty, Hawke’s Bay moved the ball back downfield and a superb back-of-the-hand offload from Buckman to O’Connor saw him go over for West to add the conversion. It lead to an action-packed last 10 minutes. 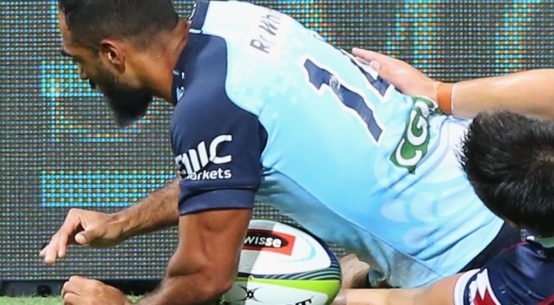