The Waratahs will be looking to consolidate their position at the top of the Australian Conference when they meet the Reds at Suncorp Stadium in Brisbane on Saturday.

The Waratahs have won their last eight games on the bounce against the Reds by an average margin of 19 points per match; however, they had lost their five meetings prior to that run.

However the ‘Tahs, who have 31 points, cannot take victory for granted, with the Rebels breathing their down neck on 30 points.

Meanwhile, a home loss would all but extinguish the Reds’ hopes of sneaking into the play-offs through the back door. The Queensland outfit have performed well in their last two games against the Highlanders and Hurricanes and as a result coach Brad Thorn has kept changes to a minimum.

“It’s a big game this weekend. Queensland v New South Wales is one of those games everyone marks down on their calendar. We’re excited to be playing them at Suncorp Stadium, in our traditional maroon strip,” he said.

“We haven’t made a lot of changes for the match because we feel the team has put in two big efforts where we’ve just fallen short in recent weeks.”

In terms of per-game stats, the Waratahs are ranked second for metres made (486.4) and clean breaks (14), and one would expect them to have too much attacking strength for an inconsistent Reds side. Only the Crusaders (4) and Hurricanes (6) have conceded fewer tries in the final quarter of games than the Waratahs (7) this campaign.

The ‘Tahs have won seven of their last eight away games against teams currently in the Australian Conference, including wins in their last two such fixtures.

“We are both passionate about our States and the jersey and that will come through again. (Reds Coach) Brad Thorn is known to set up his team to be physical like we saw in the game at the SCG in April, so we expect that to be the case again on the weekend,” said Gibson.

With all the odds pointing in favour of the away side, they must avoid a potential banana skin in the final game before the international break.

The last time the teams met: Taqele Naiyaravoro grabbed a brace with further tries from Jake Gordon and Harry Johnson-Holmes securing a 37-16 victory six weeks back over the Reds, who scored through a single Filipo Daugunu intercept try.

For Reds: Of the 170 players to make 50 or more carries in Super Rugby this season, Filipo Daugunu has the best average gain (11.4m) of any player, while his opposite number on Saturday, Naiyaravoro, has the second best rate (10.8m). Daugunu has scored five tries in 11 games; not a bad return for the 23-year-old’s first Super Rugby season. What Daugunu does have is raw pace and an eye for the intercept so the ‘Tahs need to be on their toes.

For Waratahs: Taqele Naiyaravoro has scored 10 tries and run for 867 metres in 10 matches this season so far as he continues to torment opposition defences week in and week out. The bulky winger, who possesses a devastating hand-off, hasn’t come away from a game this season having scored a single try as he deals in doubles and hat-tricks, which is what has made him a genuine match-winner for his side. Naiyaravoro is not all brute force as the 26-year-old Fijian flyer has shown a subtle touch to his game, making 17 offloads, the tenth-most of any player in the competition.

Team news: The Reds have made two changes to their starting XV. One change has been made to the starting pack, with lock Kane Douglas returning to the starting side, shifting Harry Hockings to the bench.

In the backs, 22-year-old scrum-half Moses Sorovi has earned his first start, with Ben Lucas moving to the bench. Meanwhile, Hamish Stewart and Jono Lance have swapped positions. Stewart returns to the starting fly-half jersey for the second time this season, with Lance assuming the full-back role.

In the reserves, hooker Alex Mafi has returned to the matchday squad for the first time since Round 13, with Andrew Ready dropping out of the 23.

Utility back Jayden Ngamanu has also returned to the squad for the first time since Round Eight, with Aidan Toua dropping out.

Meanwhile, the inclusion of versatile loose forward Jed Holloway at lock is the only change to the Waratahs’ starting line-up.

Holloway came off the bench against the Chiefs in Hamilton last week. His selection means that Tom Staniforth is on the bench alongside young tighthead prop Shambeckler Vui, who replaces Paddy Ryan.

Waratahs fly-half Bernard Foley is poised to play his 100th Super Rugby match in Brisbane after notching up his century for NSW against the Chiefs last week.

Form: The Reds opened their campaign with a defeat to the Rebels before bouncing back by going on a three-match winning streak with victories over the Brumbies, Bulls and Jaguares. What followed was then a four-match losing run with defeats to Stormers, Brumbies, Waratahs and Chiefs. They then beat the Lions but since then have lost to the Sunwolves, Hurricanes and Highlanders.

The Waratahs started with a win against the Stormers, a draw with the Sharks and a loss to the Jaguares in their opening three matches. They then went on a four-match winning streak with victories over the Rebels, Brumbies, Sunwolves and Reds before losing their next three to the Lions, Blues and Crusaders. They bounced back with a win over the Highlanders before losing to the Chiefs last weekend.

Prediction: Unfortunately for the Reds, the ‘Tahs stranglehold is set to continue. Waratahs by six. 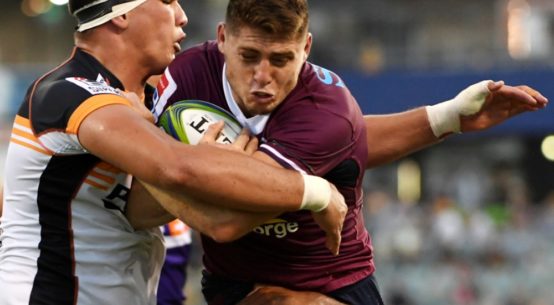